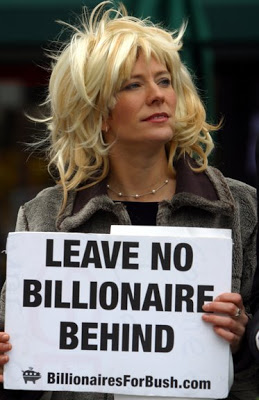 ‘Almost all political conflict, especially in the US, boils down to a fight between the Sane Billionaires and the Insane Billionaires’
By Jonathan Schwarz

I believe human civilization will likely — despite current appearances — manage to mitigate global warming and survive. I have about ten reasons for this. One of them is that this is one of the few political issues in which the Sane Billionaires are on the progressive side.

Almost all political conflict, especially in the US, boils down to a fight between the Sane Billionaires and the Insane Billionaires. It generally follows this template:

INSANE BILLIONAIRES: Let’s kill everyone and take their money!

SANE BILLIONAIRES: I like the way you think. I really do. But if we keep everyone alive, and working for us, we’ll make even more money, in the long term.

This is not the case with global warming. Take Thomas Friedman, who is a pure distillation of Sane Billionarism. (And he is literally a billionaire by marriage.) On trade, foreign policy, etc., Friedman—unlike, say, Dick Cheney—doesn’t want to kill everyone on earth. He’s intelligent enough to understand blood is a big expense. However, he wants to keep us all working to make even more money for him and his fellow billionaires, and is certainly willing to kill anyone who gets out of line. There’s a gigantic chasm between this and anything that could be termed progressive.

But with global warming, Friedman is to a large degree on the progressive side. He’s like Marriner Eccles, an industrialist who later became Chairman of the Federal Reserve under FDR. Eccles said this about the Great Depression:

“It became apparent to me, as a capitalist, that if I lent myself to this sort of action [by his fellow businessmen] and resisted any change designed to benefit all the people, I could be consumed by the poisons of social lag I had helped to create.”

Then there’s the example of the National Clean Energy Summit that was just held in Nevada. The attendees were people like T. Boone Pickens, Robert Rubin, a Google representative, and Michael Bloomberg—Sane Billionaires all. (Actually, Rubin may only be a Sane Semi-Billionaire.)

This doesn’t mean progressives will win on global warming. It’s a gigantic challenge in any case. And dealing with it might require so much change that some of the Sane Billionaires will flip back to the other side. But as with people like Eccles, the threat of the Sane Billionaires’ own personal destruction combined with huge social movements can push the SBs to places you might not expect. (Note that this conference got these SBs to the same location as the Vice President of United Steelworkers.)

This entry was posted in RagBlog and tagged Capitalism, Global Warming, Humor, Satire. Bookmark the permalink.