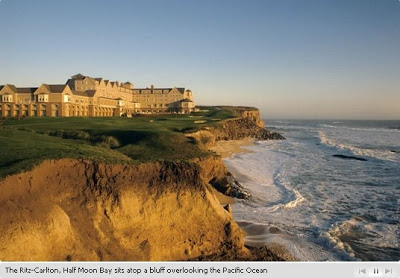 Even as the White House on Wednesday branding it “despicable” for bailed-out AIG to spend $443,000 on a swank company junket, honchos were preparing another lavish retreat.

About 50 American International Group managers are set to attend next week’s retreat at the luxurious Ritz-Carlton spa resort in California’s Half Moon Bay.

The insurance giant said the meeting is to educate 150 independent agents who sell AIG coverage to high-end clients.

“They are top business producers, and they are vital to the company,” AIG spokesman Joe Norton said. “If a company is not selling, it’s not profitable.”

The cost of the planned retreat was unknown. Rooms at the Ritz run from $300 to $1,200 a night – extra for a dip in the “Roman-style” mineral baths.

Last month, just days after the government saved AIG from bankruptcy with $85 billion in loans, the company paid for a week-long corporate junket at another California resort. The tab included $10,000 in bar bills and $23,000 in spa treatments.

“It’s pretty despicable,” said White House spokeswoman Dana Perino. “The President did not want to move forward on this rescue package … to help executives go to a spa.”

In a letter to Treasury Secretary Henry Paulson, Liddy said AIG is “reevaluating the costs of all aspects of our operations.”

Update: The second trip was cancelled.

This entry was posted in RagBlog and tagged Bank Bailouts, Corporate Corruption. Bookmark the permalink.

1 Response to AIG Proves Corporate America Has No Shame