Guantanamo: A US Government Desperate Not to Accept Responsibility for Its Mistakes 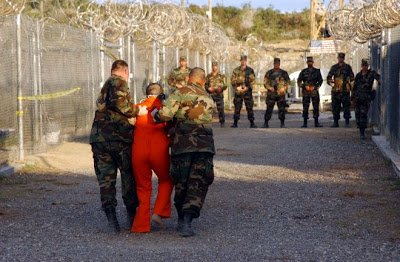 For many of the prisoners at Guantanamo, the forthcoming US presidential election holds little promise of change. Although both Barack Obama and John McCain have pledged to close Guantanamo, the problem for at least 50 of the 261 prisoners still held at the prison is not that the US government is unwilling to release them, but that there is nowhere for them to go.

These men are from countries including Algeria, China, Libya, Tunisian and Uzbekistan. Although they have been approved for release after multiple military review boards – some for at least three years – they cannot be repatriated because of international treaties preventing the return of foreign nationals to countries with poor human rights records, where they face the risk of torture. Attempts to find other countries willing to take them have also failed (with the exception of Albania, which accepted eight former prisoners in 2006), in part because, although they are approved for release, the government insists on maintaining that they are still “illegal enemy combatants.”

Generally ignored by the media, which focuses instead on the few prisoners chosen to face special “terror trials” (the Military Commissions), these men receive no special favors, in spite of their status, and are mostly held in conditions of strict solitary confinement for up to 23 hours a day.

Recently, however, some of these men have received extensive media coverage, Seventeen Uyghurs – Chinese Muslims who were sold to US forces after fleeing a settlement in Afghanistan where they had sought refuge from Chinese oppression – were allowed to present their case to a US court on October 7. The judge, Ricardo Urbina, ruled that their continued imprisonment was unconstitutional, and that, because no other country would take them, they should be rehoused in the United States.

This prompted a frantic appeal from the government, which is desperate not to accept responsibility for its mistakes by welcoming any former prisoners into the United States. The appeal was accepted, and arguments on both sides are scheduled to take place on November 24. If the appeals court upholds Judge Urbina’s ruling, this might bring an end to some of the other prisoners’ extensive legal limbo, but in the meantime the silence surrounding their predicament masks a darker truth, which has only just come to light.

Since June 2007, the administration has been stealthily attempting to repatriate various North African prisoners, under the cover of “diplomatic assurances” with the governments of Algeria, Libya and Tunisia. These are supposed to guarantee that, if returned, the prisoners will be given “humane treatment,” but as various human rights organizations have reported, the “diplomatic assurances” are worthless.

After two Tunisians were repatriated last June, the “diplomatic assurance” with the government of Zine al-Abidine Ben Ali melted away when the men faced show trials on trumped-up charges (extracted through the torture of other prisoners) and received jail sentences of three and seven years.

One was Abdul Rauf al-Qassim, a Libyan with an Afghan wife and a daughter he has never seen, and another was Ahmed Belbacha, an Algerian who had sought asylum in the UK in 1999. Belbacha, who was seized and sold by bounty hunters in Pakistan, had fled Algeria because he had been working for a government-controlled oil company and had been threatened by militants, but the British government refused to accept his return to the UK because he was kidnapped while his asylum claim was still pending. Terrified of being returned to Algeria, he told his lawyers that he would rather stay in Guantanamo, even though his cell was “like a grave.”

For most of this year, it appeared that the lawyers’ attempts to prevent their clients’ return to torture had been successful, but last month, during a visit with Cori Crider, staff attorney at the London-based legal action charity Reprieve, Ahmed Belbacha explained that in July he had been taken aside by a group of US soldiers who had ordered him to sign papers approving his release from Guantanamo. Knowing that a court had put a stay on his repatriation, Belbacha refused, but his lawyers did not hear about it until Crider’s latest visit with him last month.

Although lawyers for other prisoners are not at liberty to speak about similar cases (because their cases are sealed before the US courts), it appears that this was not an isolated case. The only conclusion that can be drawn is a bleak one: In an attempt to clear out unwanted prisoners from Guantanamo – and also, no doubt, to prevent them from seeking asylum in the United States if Judge Urbina’s ruling stands – the authorities at Guantanamo are deliberately undermining rulings made in courts on the US mainland to prevent the forced repatriation of vulnerable prisoners.

This is shocking, of course, but it is unsurprising given that those who established Guantanamo have consistently expressed disdain for the law, and have sought nothing less than unfettered executive power.

Andy Worthington is the author of “The Guantanamo Files: The Stories of the 774 Detainees in America’s Illegal Prison” (published by Pluto Press). Visit his website at: www.andyworthington.co.uk. He wrote this commentary for THE DAILY STAR.

This entry was posted in RagBlog and tagged Criminal Justice, Geneva Conventions, Guantanamo. Bookmark the permalink.