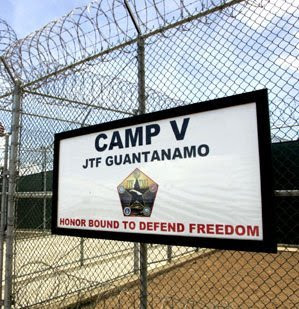 ‘British resident held in Guantanamo Bay was brutally tortured after being arrested and questioned by American forces.’
By Robert Verkaik / October 31, 2008

Senior CIA officers could be put on trial in Britain after it emerged last night that the Attorney General is to investigate allegations that a British resident held in Guantanamo Bay was brutally tortured, after being arrested and questioned by American forces following the terrorist attacks on New York and Washington in 2001.

The Home Secretary Jacqui Smith has asked Baroness Scotland to consider bringing criminal proceedings against Americans allegedly responsible for the rendition and abuse of Binyam Mohamed, when he was held in prisons in Morocco and Afghanistan.

The development follows criticism of US prosecutors by British judges who have seen secret evidence of torture committed against Mr Mohamed, including allegations his torturers used a razor blade to repeatedly cut his penis. The Attorney’s investigation is expected to include allegations that MI5 colluded in Mr Mohamed’s rendition. Mr Mohamed, 30, an Ethiopian national and British resident, was arrested in Pakistan in 2002, when he was questioned by an MI5 officer.

On Tuesday, Government lawyers wrote to the judges hearing Mr Mohamed’s case against the UK government in the High Court. In the letter they said “the question of possible criminal wrongdoing to which these proceedings has given rise has been referred by the Home Secretary to the Attorney general for consideration as an independent minister of justice”. Baroness Scotland has been sent secret witness statements given to the court and public interest immunity certificates for the proceedings.

Mr Mohamed, 30, accuses MI5 agents of lying about what they knew of CIA plans to transfer him to a prison in north Africa, where he claims he was subjected to horrendous torture. Mr Mohamed, who won asylum in the UK in 1994, has been charged with terrorism-related offences. He awaits a decision on whether he is to face trial at the US naval base. He is officially the last Briton at Guantanamo. Last night his lawyer, Clive Stafford Smith, said: “This is a welcome recognition that the CIA cannot just go rendering British residents to secret torture chambers without consequences, and British agents cannot take part in US crimes without facing the music. Reprieve will be making submissions to the Attorney General to ensure those involved, from the US, Pakistan, Morocco, Britain, are held responsible.”

Richard Stein, of Leigh Day, representing Mr Mohamed in the High Court proceedings, said: “Ultimately the British Government had little choice once they conceded that a case had been made that Binyam Mohamed was tortured. The Convention Against Torture imposes an obligation on signatory states to investigate torture.”

In August two judges ruled allegations of torture were at least arguable and that MI5 had information relating to Mr Mohamed that was “not only necessary but essential for his defence”.

The judges have read statements and interviews with Mr Mohamed between 28 and 31 July, 2004 when he says he was forced to confess to terrorism. The judges said: “This was after a period of over two-and-a-half years of incommunicado detention during which Binyam Mohamed alleges he was tortured.”

He was first held in Pakistan in 2002, where a British agent interrogated him; he was then sent to Morocco by the CIA and allegedly tortured for 18 months. He was rendered to the secret “Dark Prison” in Afghanistan, where his torture is alleged to have continued. Since September 2004, he has been in Guantanamo Bay.