Guatemala : A General Sense of Insecurity 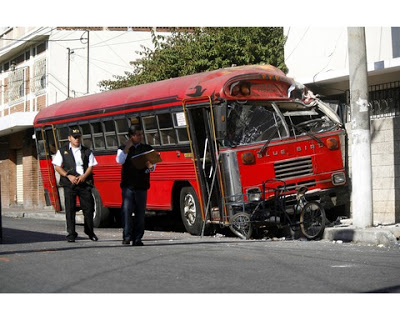 Guatemalan police work at crime scene where bus driver was killed in ongoing domestic violence. Photo by Reuters / All Voices.
Insecurity in Guatemala

There are several processes taking place on the governmental level that are intended to reduce this insecurity, but so far, they have not convinced people that the government or the police are able to provide basic security for citizens, much less foreigners who are likely to be considered rich pickings for street crimes.

Last week, I was in Guatemala City. It has always felt less safe than in some other parts of the country, and on this visit I continued to feel a pervasive sense of insecurity among the group with whom we partner, CEDEPCA [an ecumenical training center for community action]. One example of this is the reaction to my plan to go by city bus to buy my international bus ticket. My colleague Betty seemed ok with my plan but others in the office were rather surprised that I would go unaccompanied by bus, and expressed concern for my safety.

“Make sure the bus goes where you want to go, but don’t sit near the driver,” said the woman who shares Betty’s office. (There have been assassinations of drivers of public buses while they were driving lately.) “Be sure not to carry your passport, just take a copy,” Betty warned. I think their warnings reflect the general concern for the comfort and safety of a woman alone and a foreigner at that.

I think the staff at CEDEPCA share a general sense of growing insecurity that is common among middle-class people in Guatemala. There are several processes taking place on the governmental level that are intended to reduce this insecurity, but so far, they have not convinced people that the government or the police are able to provide basic security for citizens, much less foreigners who are likely to be considered rich pickings for street crimes.

I have experienced more concern about using public transportation here than in other cities where I work, and I try to take the advice I am offered. At any rate, my bus trips to and from the bus office were uneventful, and I travelled to El Salvador the next day.

Lately in Guatemala, there has been a rash of killings of drivers of public buses, and more widespread extortion of money from both drivers and other businesses. Organized crime here is considered to be in control of drug trafficking, human trafficking (including fraudulent adoptions) and to some extent, of gang activity. Few people consider the police forces, local, national or specialized groups such as tourist police, to be adequate protection — in some places they are known to be active in crime, and in others considered impotent at best.

I have read of two efforts to respond to this concern. One is the process called CICIG, an international initiative to reduce impunity in the judicial system by developing more effective investigative and prosecutorial efforts by the police, and reducing corruption among judges. They are investigating a number of high profile cases, presumed to involve some high authorities, as yet unnamed and uncharged. One case is that of three Salvadoran members of the Central American Parliament, who with their driver, were killed in February 2007. Five Guatemalan police were arrested in this case, and, assassinated a few hours after being transferred to another prison. One of the suspect/victims was the head of the Organized Crime Unit. They are also investigating the murders of a group of Nicaraguans and one citizen of The Netherlands, whose bus was intercepted and burned.

On May 1, the government put into effect a law regulating licensing of guns and sale of bullets, intended to control rampant arms sales here. While as a licensing measure it may be ineffective, what is hoped is that it will cause criminals who have illegal arms to remain detained in jail after arrests — frequently they are released for lack of proof (or because judges are either paid or afraid to arraign them) after too hasty arrests. Some citizens are skeptical about any measures initiated by the current government, widely accused of having ties to drug cartels, but otherd are hopeful about results.

One effect of the widespread cynicism is growing vigilante or mob violence against accused criminals. The day I arrived the newspaper had stories of three men who were thrown off bridges by people who accused them of being extortionists. These events are common in the capital and in the provincial cities as well. In previous visits I have heard of organized vigilante groups, although not this time. Still, armed security guards are omnipresent.

I also heard of kidnappings of children, one of whom was killed, in a small town near a large provincial city. When I asked a Guatemalan about these kidnappings, he told another horrific story — the victims are not merely murdered but often cut into pieces, beheaded or show signs of torture — the intention is to terrorize their families into complying with kidnappers’ demands. These events all lead to a sense that Guatemala is unsafe for both visitors and residents.

[Texan Val Liveoak is a nonviolent activist who works with the Friends Peace Teams, a Quaker-sponsored network of groups and organizations that work for peace in communities around the world. Currently living in El Salvador and San Antonio, she coordinates Peacebuilding en las Americas, the Latin American Intitiative of Friends Peace Teams which also has programs in the African Great Lakes region and in Indonesia.]

This entry was posted in Rag Bloggers and tagged Guatemala, Latin America. Bookmark the permalink.

4 Responses to Guatemala : A General Sense of Insecurity