Haiti : Why Voodoo Won’t Do 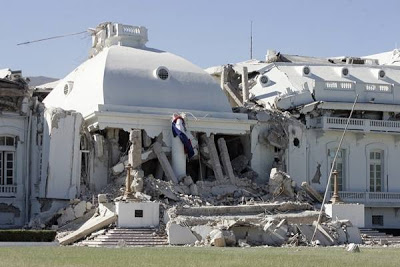 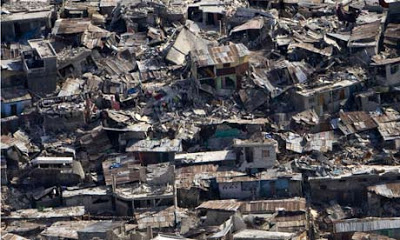 Above, the National Palace in Puerto Principe. Photo from EPA / Zumapress.com. Below, destroyed housing in Port-au-Prince. Photo by Logan Abassi / Getty Images.
Why Voodoo won’t do:
Haiti and the superstructure of failure

One of the most unfortunate but seemingly inevitable footnotes to virtually any global tragedy is the rapid appearance of analysts laying the blame at the feet of the United States.

After 9/11, it was common to see articles arguing that the reason certain portions of the Muslim community hate us is because we’ve been mistreating them for years. Now, since the earthquake in Haiti, it’s equally common to read essays whose conclusion is that Haiti’s failure is the inevitable outcome of American misbehavior and abuse over the past centuries.

While it makes an emotionally appealing argument and there are always historical facts that seem to show causality through a trail of crimes that lead straight to Washington, an understanding of culture and its role in human societies tells a tale far different, far more complicated… and much closer to the truth.

There’s a popular folk saying that “success has a thousand fathers while failure is an orphan.” Both as individuals and groups, when we are successful we tend to claim credit, yet when we fail we tend to blame others. We all acknowledge in our hearts the fallacy of this behavior, so why is it so hard to do so on a societal level?

Unlike many successful societies, Haiti did not suffer atomic blasts on its cities (Japan) nor lie in complete ruins and devastation just decades ago (England, Germany, France, Italy); it did not suffer apartheid (South Africa), mass murder (Russia, China, Armenia, Cambodia), or devastating religious wars (Ireland, India, Pakistan). Indeed, by the standards of horrendous historical deeds and misdeeds, Haiti cannot be said to have suffered a particularly difficult history.

By this comparison, I don’t mean to make light of the historical truths of Haiti’s history, not absolve other nations or individuals of their misdeeds. However, to consider their case fairly and understand the problem before us, it must be acknowledged that by global standards, Haiti cannot really claim any particularly grievous or unique trauma other than its very birth… and therein lays the problem; it is congenital. Haiti’s problems are not the result of the way they were treated by others, but by the way they treated themselves.

Haiti is very simply and tragically the nation/state version of William Golding’s masterpiece of cultural analysis, The Lord of the Flies. The planet didn’t need a tragedy to prove his thesis, but here we have it. It is a real life portrayal of his fictional island, demonstrating to any with the courage to look and the eyes to see that what determines a society’s success or failure are its own cultural values.

Like Golding’s unschooled, undisciplined children on their island, the future failure of the Haitian nation was writ large at its birth. Thereafter, given the realities of human nature and their own utter lack of cultural values that would sustain and protect them, they were virtually doomed to fail.

Culture is widely misunderstood as simply describing “the way we are” or “the things we do.” However, culture has a purpose and a job, and that is to organize a group of humans in such a way that the chances of survival and success of that group is enhanced. In short, cultural values are the superstructure of success or failure.

At the time of their rebellion and liberation, the Haitian people, like Golding’s characters, quite simply had no system that could guide them to success, as through no fault of their own they were a broken people. Therefore, the birth of the Haitian nation could not have been more inauspicious; a desperate, culturally misbegotten people who among them knew only one thing; that freedom was better than slavery. In the end, while that knowledge brought them freedom, it was not nearly enough to bring them out of the grip of voodoo values and into the modern world.

This historical and congenital crime and its natural result is not their fault, but it is the cause of their failure. Therefore, their failure is just as surely not the fault of their neighbors the Dominicans, or of the regional powers with whom they interacted over the centuries.

Just as we all as individuals have been occasionally treated abusively or taken advantage of, in the end our success or failure is up to us, and a mature assessment shows that blaming others is not only counterproductive but well off the mark. As go individuals, so go groups and nations.

While Haiti certainly could have been treated better, their treatment is not the cause of their failure: it was a demonstrably failed society long before this most recent disaster. In short, if the issue of Haitian cultural disfunctionality is not understood and addressed, then the immense job of rebuilding Haiti moves from the very difficult to the patently impossible, and blaming others for their failure is quite simply not going to advance the mending of the cultural values that cause Haiti’s historic and ongoing failure.

38 Responses to Haiti : Why Voodoo Won’t Do