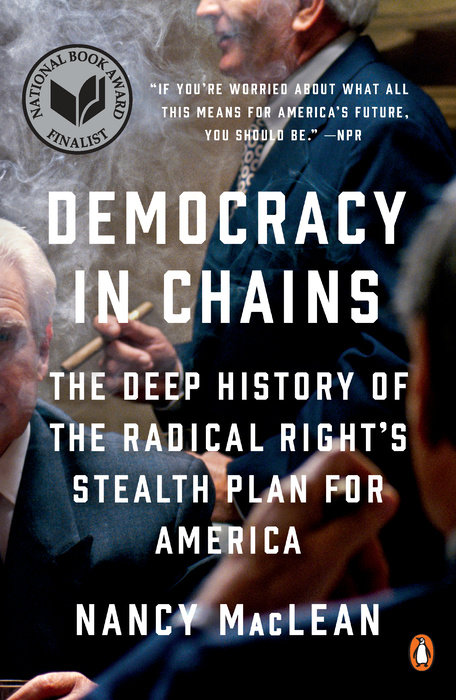 Nancy MacLean, in her groundbreaking 2017 book, Democracy in Chains: The Deep History of the Radical Right’s Stealth Plan for America, addresses one of the central problems facing the American people, indeed majorities of people around the world: the contradiction between democracy and capitalism.

As we look to the 2022 elections, the seemingly successful efforts of state governments, with support from the court system, to suppress voting, gerrymander districts, and in other ways to squelch the voices of the people, threatens majority rule. In addition, media consolidation, the creation of “news deserts,” restricting what is to be taught in the education system from grade one through the university, all are part of the concerted threat to fully inform the public. This too is a threat to democratic participation and majority rule. Consequently, it is useful to revisit MacLean’s main arguments.

MacLean begins by analyzing central premises of the so-called Austrian school of economics. Nineteenth and twentieth century luminaries from this tradition, particularly Van Mises and Hayek, articulated the view that the main priority of any society, but particularly democracies, is the extent to which markets are allowed to flourish, unencumbered by governments.

According to this view, in a truly free society markets remain supreme. In fact, “liberty” exists in a society to the extent economic actors are unrestrained in the marketplace. Virtually all limitations on economic liberty so defined constitute a threat to “real” democracy. Governments exist only to maintain domestic order (the police power) and to defend the nation from external aggression (defense of national security). Governments provide police protection and armies. And that should be all. In sum, as President Ronald Reagan expressed the market vision: “Government is not the solution. Government is the problem.”

To further illustrate, MacLean describes the brutal dictatorship that overthrew the democratically-elected president of Chile, Salvador Allende. Allende, a socialist, was elected by a plurality in the 1970 presidential election in that country and in the spring, 1973, in municipal elections held across the country, Allende’s coalition of parties drew even more votes for their candidates than did Allende in 1970. The United States, based on directives from President Nixon, had already moved to make the Chilean economy “scream” and had initiated contacts with Chilean generals who would be prepared to carry out a military coup against the popular government. The military coup, ousting Allende from power, was launched, ironically, on September 11, 1973.

As MacLean points out, in the aftermath of the coup, General Augusto Pinochet rounded up and killed thousands of Allende supporters, destroyed the long tradition of electoral politics, abolished trade unions, and began the process of ending government involvement in the economy and public institutions. Social security and education were privatized. Policies of nationalization of key industries were reversed.

The shifts to what the Austrian school called economic liberty were imposed on the Chilean people with the advice of University of Chicago economists, such as Milton Friedman, and later, George Mason University economist, James Buchanan, who was instrumental in recommending “reforms” to the Chilean constitution making return to democracy more difficult. Subsequently only a few other dictatorships in Latin America showed any sympathy for the Pinochet regime with most of the world condemning its domestic brutality.

Milton Friedman and his colleagues never
condemned the Chilean regime.

But as MacLean reports, Milton Friedman and his colleagues never condemned the Chilean regime and Buchanan regarded it as a paradigmatic case of economic liberty, a model which the world should emulate. (And today, the Chilean people are rising up to rewrite the Pinochet era constitution that suppressed democracy.)

Although the Chilean case represents an extreme example of dictatorship and free market capitalism, she uses it to illustrate a central point. In most societies, and the United States is no exception, majorities of people endorse government policies that can and often do serve the people. Ordinarily, citizens support public transportation, schools, highways, libraries, retirement guarantees, some publicly provided health care, and regulations to protect the environment, as well as police and military protection. The problem for Buchanan and his colleagues is that each one of these government programs. except for the police and military, constrains the “liberty” of entrepreneurs to pursue profit.

To put it simply, if citizens of the United States were asked if they support public programs, majorities would say “yes.” Although there have been extraordinary constraints on majority rule, even enshrined in the U.S. constitution, the history of the United States can be seen as a history of struggles to improve and achieve majoritarian democracy. Demands for voting rights for women, African-Americans, non-propertied and low-income workers, released prisoners, and others have been basic to the American experience. The great anti-colonial struggles of the twentieth century all across the globe were premised on the vision of individual and collective sovereignty of the people. If economic liberty is conceptualized as inversely related to majoritarian democracy, then capitalism and democracy are incompatible.

ALEC affiliates in state legislatures have promoted legislation to suppress the right to vote.

Nancy MacLean, based on this fundamental contradiction, develops a narrative of efforts by celebrants of economic liberty, the Koch brothers and their allies, to build campaigns in virtually every state and locale to disenfranchise people. ALEC affiliates in state legislatures over the last decade have promoted legislation to suppress the right to vote, eliminate the rights of workers to unionize, disempower city councils, eliminate the right of local governments to make fiscal decisions, and to enshrine in curricula in K to 12 education systems and the universities ideologies about the virtues of economic freedom.

There is powerful political pressure to privatize every existing public institution. And this pressure has increased and today comes from almost the entirety of the Republican Party and some of the Democratic Party as well (including efforts to defeat progressives within their ranks). Again, the best government is no government (except for the maintenance of police force to squelch demands for change and military power to protect the nation at home and abroad).

Nancy MacLean is warning us that there is a powerful drive, based on wealth and power, in the United States to destroy democracy. This democracy, while flawed, has been fought for since the founding of the United States. Its continuation, leaving aside its need for improvement, is under fundamental threat.