JONAH RASKIN :
BOOKS | ‘By the Light of Burning Dreams’: Everybody
is a star

The book honors ‘the triumphs of the Sixties,’ though it does not neglect ‘the tragedies.’ 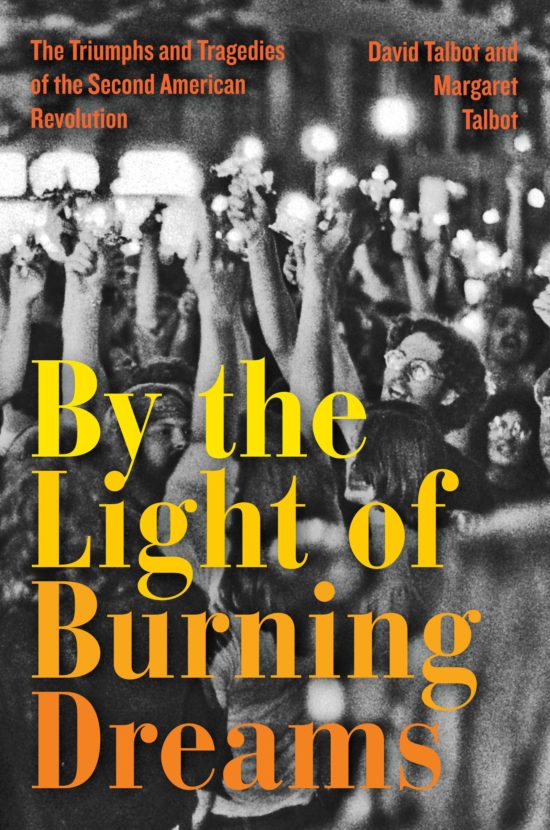 Near the end of his days as a cultural revolutionary, Abbie Hoffman explained, facetiously, that he was to blame for crime in the streets, kids acting out, and drug addiction. He was reacting to the ongoing assaults on the Sixties and the smears on his own personality.

Even before the decade of the 1960s ended, critics of the counterculture and the anti-war movement lambasted radicals, feminists, and left-wing ideologists for creating anarchy and fomenting chaos.

Over the past five decades, the culture wars — with defenders of the Sixties on one side and detractors on the other — have not abated. Americans are still scapegoating “The Sixties.”

Americans are still scapegoating ‘The Sixties.’

A work of art on exhibit this summer at the Morgan in New York seems to exemplify this state of affairs.

Titled “Hellish Sixties,” it depicts a figure with obscured eyes and the phrase “you are very sleepy” which suggests mass hypnosis. A transcribed letter to the editor of Vogue magazine explains, “The sixties were not glamorous or innocent as your October issue would have us believe…It was pure hell.” 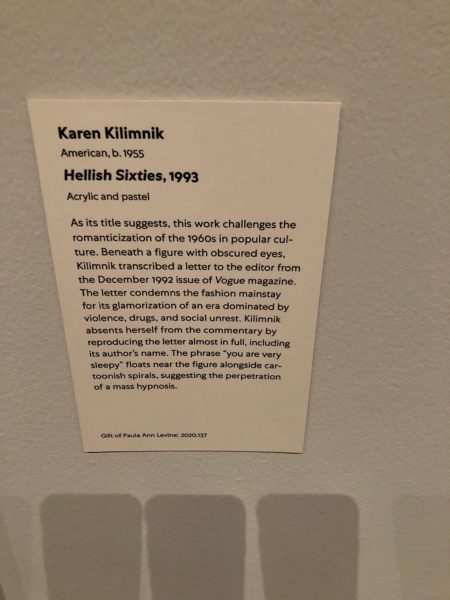 For the most part, By the Light of Burning Dreams (Harper; $28.99) honors “the triumphs of the Sixties,” though it does not neglect “the tragedies.” The book, which is by David Talbot and Margaret Talbot (a brother and sister) with help from Arthur Allen, Margaret’s husband, as well as Camille Peri, David’s wife, is divided into eight chapters, plus an introduction.

I might call ‘By the Light’ a work of history as biography.

I might call By the Light, a work of history as biography and an exploration of the role of celebrities in the making of the era.

The Talbots focus on well-known Sixties figures, such as Tom Hayden and Jane Fonda and John Lennon and Yoko Ono.

They also chronicle the rise and fall of prominent Sixties organizations and groups such as The Black Panthers, the United Farm Workers, and the American Indian Movement.

By the Light is a pleasure to read. It’s well-researched, consciously-crafted, and thoughtfully arranged. Much of the material will be eye-opening to Americans who didn’t come of age until the Obama years.

Veterans of the Sixties will probably recognize most of the individuals and groups that are profiled in these pages, but they will likely be surprised even if they protested in the streets of Chicago in the summer of 1968, gathered at Woodstock the following year and watched the Watergate hearings on TV in 1973.

Heather Booth isn’t an unknown feminist, but the Talbots rightfully give her more attention than she has so far received in the annals of the era includng Todd Gitlin’s classic, The Sixties: Years of Hope, Days of Rage, which covers the history in great detail and also has political axes to grind.

The Talbots are mostly not interested in settling scores, though they make judgments.

The Talbots are mostly not interested in settling scores, though they make judgments about the efficacy of political gestures like the Panther romance with guns and Cesar Chavez’s drift away from field workers into his own head.

Like Heather Booth, Craig Rodwell isn’t widely known outside the gay liberation movement, though he played a big part in persuading closeted men and women to come out and to demonstrate in the streets. The Talbots accord Rodwell the recognition he deserves.

The authors aim to balance the role of crowds with the role of leaders like Hayden, Bobby Seale, Cesar Chavez, and Dennis Banks. But they tend to come down on the side of leaders, or “celebrities” as they call them.

By my count that word appears more than a dozen times in these pages. Barbara Walters is defined as a “celebrity hound” and New York is described as the “capital of celebrity culture.”

I lived in New York from 1967 to 1974, a time when celebrities were accessible. I did not have to go out of my way to meet Jerry Rubin, Bill Kunstler, Marge Piercy, Bernardine Dohrn, and Susan Sontag.

It may be helpful to say that while men like Hayden and Seale were famous in the movements they helped to jump start and fuel, they were largely unknown to Americans who got their news from Walter Cronkite and Barbara Walters.

Some leaders may have had 10 minutes of fame.

Some leaders may have had 10 minutes of fame before they passed into the pages of obscurity.

Aaron Sorkin’s greatly flawed feature, The Trial of the Chicago Seven, has done more to educate twenty-something year olds about the defendants in Judge Julius Hoffman’s courtroom than any other recent movie or book. And that’s a good thing.

By the Light of Burning Dreams comes along at precisely the right time to deepen and widen the view of the Sixties that’s held by those who have come of age with the Black Lives Matter movement and #Me Too.

This book is clearly written with events of the last few years in mind, though thankfully it doesn’t try to draw direct lines between then and now. The authors respect the intelligence of their readers.

About two thirds of the way through their book, the Talbots write that “any uprising” is “a call and response between the crowd and individual actors in it.”

As sly Sly Stone sang, ‘Everybody is a star.’

Sometimes the crowd anticipates the headliner, and, as sly Sly Stone sang, “Everybody is a star,” “everybody wants to shine.”

From my point of view, the Talbots exaggerate the role of celebrities and don’t give nearly enough credit to the many many people (the crowds) who belonged to SDS, the Panthers, the United Farm Workers, and the women’s and gay liberation movements.

The authors clearly made a conscious decision to emphasize the stars of the Sixties show.

Near the start of By the Light, the authors offer a quotation from Anne Weills who observes that while Tom Hayden “believed that individual agents make history,” she and the women in the Red Family emphasized “collective leadership,”and that “the masses make history.”

They also recognize the pitfalls of stardom.

By focusing on celebrities, the Talbots add something new and different to our understanding of the Sixties. They also recognize the pitfalls of stardom and know that a celebrity can unfortunately create a cult of his or her own personality.

By the Light swings the pendulum a bit too far toward what the Talbots call “the politics of stardom” and “celebrity activism.”

Sometimes they also exaggerate for effect. They call the events at Wounded Knee in the early 1970s, “the most courageous and sustained Native American uprising in the twentieth century.” Maybe. What about the occupation of Alcatraz which preceded Wounded Knee?

Why does there have to be a “most”? And why do the authors have to say that Tom and Jane were “one of the most formidable couples in American politics”? Eldridge and Kathleen Cleaver were also a formidable couple and so were Abbie and Jerry.

Couples come in many shapes and sizes. They come from every corner of the North American continent and from every social class and ethnic group. Some are white collar, others blue collar.

Tom gazed at the owner and said, ‘I’m Dustin Hoffman.’

I have one story I have to tell. At an Italian restaurant with my pal Tom Hayden, the owner who was Jewish and gay, looked at him and asked, “Where do I know you from?” Tom gazed at the owner and said, “I’m Dustin Hoffman.” The owner shook his head, “No you’re not.” Tom replied, “I’m Tom Hayden.”

The owner said, “You’re the guy who was married to Jane Fonda.”

Perhaps that’s how history will remember him, not as the author of the Port Huron Statement and not as a California politico, but as Mr. Jane Fonda.

By the Light of Burning Dreams accords Tom the attention he deserves. It honors dozens of largely unsung and unheralded individuals, including Stew Albert, Judy Gumbo. Bill Zimmerman, Dolores Huerta, Madonna Thunder Hawk, Kiyoshi Kuromiya, and Shinya Ono, who became a friend and a comrade.

Open the pages of this elegantly-written and provocative book and meet the usual and unusual suspects in all their glory and with all their charisma. And don’t forget, “Power to the People!”

2 Responses to JONAH RASKIN :
BOOKS | ‘By the Light of Burning Dreams’: Everybody
is a star