Posted on September 6, 2011 by Thorne Dreyer 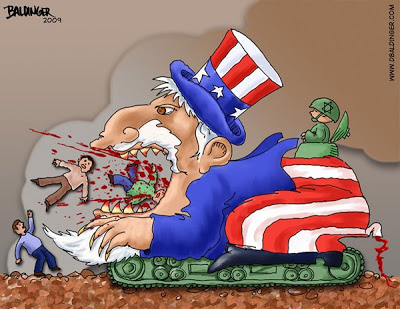 In both countries the 9/11 event was followed by violence, threats to democracy, and economic shifts from the vast majority of the population to the wealthy and political/military elites.

On the bright and sunny morning of September 11, 1973, aircraft bombed targets in Valparaiso, Chile, and moved on to the capital, Santiago. Following a well-orchestrated plan, tanks rolled into the capital city, occupied the central square, and fired on the Presidential palace. Inside that building, President Salvador Allende broadcast a final address to his people and fatally shot himself as soldiers entered his quarters.

Thousands of Allende supporters were rounded up and held in the city’s soccer stadium and many, including renowned folk singer Victor Jara, were tortured and killed. For the next 15 years, Chilean workers were stripped of their right to form unions, political parties and elections were eliminated, and the junta led by General Augusto Pinochet ruled with an iron fist all but ignored outside the country until Chileans began to mobilize to protest his scheme to become president-for-life.

Of course, 9/11/01 was different. The United States was attacked by foreign terrorists, approximately 3,000 citizens and residents were killed at the World Trade Center, over a rural area in Pennsylvania, and at the Pentagon. People all over the world expressed their sorrow and sympathy for the victims of the 9/11 attacks as the American people experienced shock and dismay.

But then everything began to change. Within days of the terrorist attacks, members of President Bush’s cabinet began to advocate a military assault on Iraq, a longstanding target of the Washington militarists of the Project for a New American Century (PNAC). Now is the time, they said, to take out Saddam Hussein, seize control of Iraqi oil fields, and reestablish United States control over the largest share of the oil fields of the Persian Gulf region.

Cooler heads prevailed for a time, however. We cannot attack Iraq, critics said, because Iraq had nothing to do with the crimes in New York, Pennsylvania, and Washington.

So it was decided that a war would be waged on Afghanistan, because the headquarters of the shadowy organization Al Qaeda, led by Osama Bin Laden, was said to be in that country. On October 6, 2001, that war was initiated and still goes on although Bin Laden has been killed.

Shortly after launching the war on Afghanistan, the neocons in the Bush administration began a campaign to convince the American people that we needed to make war on Iraq. Lies were articulated that the Iraqi dictator was really behind the global terrorists who perpetrated 9/11. He had weapons of mass destruction. He was part of a global Islamic fundamentalist cabal.

At last, despite evidence to the contrary, the mobilization of millions of Americans against war, and growing global resentment against the Bush Doctrine justifying preemptive wars, the United States attacked Iraq in March, 2003. That war too still goes on.

Over the last decade, U.S. military budgets have tripled, thousands of U.S. soldiers have died or sustained irreparable injuries, and an estimated one million Afghan and Iraqi people, mostly civilians, have died.

Meanwhile the United States has maintained over 700 military installations around the world, declared the great land and sea area around the globe at the equator the “arc of instability,” and engaged in direct violence or encouraged others to do so, from Colombia to Honduras in the Western Hemisphere, to Ethiopia and Somalia in the Horn of Africa, to Israel, Iraq, Iran, Yemen, Syria and Libya in the Middle East and Persian Gulf, to Pakistan, and Afghanistan in East Asia.

Presidents Bush and Obama have declared that United States military overreach to be in the national interest of the country and to serve the humanitarian interest of the world. Now the U.S. program includes the use of computer-operated aircraft, drones, that can target and kill anywhere based on decisions from command headquarters half way around the globe.

Meanwhile at home, the Patriot Act has extended the prerogatives of government to launch a program claiming to be essential to protect the people from domestic terrorists: spying on Americans; incarcerating people from virtually anywhere deemed to be a security threat; and establishing a political climate that intimidates critics of United States foreign policy.

Domestically, the decade since 9/11 has been characterized by sustained assaults on the basic living standards of the bottom 90 percent of the population in terms of wealth and income. Unemployment has risen dramatically. Job growth has ground to a halt. Health care benefits have declined while costs skyrocket.

Virtually every public institution in America, except the military, is being threatened by budget cuts: education, libraries, public health facilities, highways and bridges, fire and police protection, environmental quality.

Support for war overseas and at home is stoked by a so-called “war on terrorism” and an anti-government ideology, made popular earlier by the Reagan administration, that lionizes Adam Smith’s claims that only the market can satisfy human needs. Following 9/11, the “beast” — government — has been starved even more, resulting in increased demand on workers and institutions with reduced resources, offering “proof” that government never works.

Not all have had to sacrifice during this 10-year “war on terror” and its attendant domestic programs. The rich have gotten richer while the income and wealth of 90 percent of the population have experienced economic stagnation or decline.

Media monopolization has facilitated the rise of a strata of pundits who simplify and distort the meaning of events since 9/11 by claiming that war is necessary; the terrorist threat is a growing global threat; as a nation and individually we need to arm ourselves; and subliminally it is people of color who constitute the threat to security and well-being.

Where do we go from here?

So the United States’ 9/11 event was not the first. The Chilean 9/11 preceded the U.S. one by 28 years. Its people experienced a brutal military coup. And in the United States mass murder was committed by 19 terrorists. But in both cases the 9/11 event was followed by violence, threats to democracy, and economic shifts from the vast majority of the population to the wealthy and political/military elites. In both cases, draconian economic policies and constraints of civil and political rights were defined as required by threats to the “homeland.”

As the 10-year anniversary of the U.S. 9/11 is remembered, it is critical to reflect upon how the murder of 3,000 citizens and residents was defined as an opening salvo in a perpetual “war on terrorism”: how this war trumps traditional civil liberties afforded by the constitution; how this war must be waged at whatever cost to the lives and economic resources of the country; and, as with the Cold War, military spending must take priority over every other activity for which the government has a role.

9/11/73 caused the Chilean people pain and suffering that they are still working to overcome 28 years later. Unless the American people mobilize to challenge the policies, foreign and domestic, that were justified by the tragedy of 9/11, the United States will continue to move down a similar path the Chilean people traveled after their 9/11.