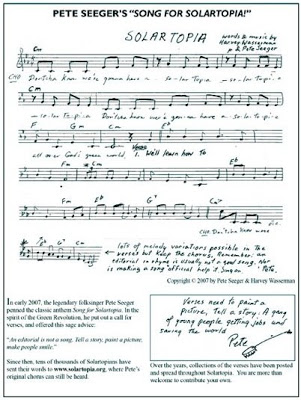 Includes Video of ‘From Ecotopia to Solartopia — A Visionary Conversation’ with Ernest Callenbach.

The noble vision of a Solartopian green-powered Earth is at last upon us.

Our eco-future is defined by the four Great Green Truths: we have a global crisis, it has a solution, the solution is winnable, and winning requires a “middle path” of action that is both non-violent and non-stop.

There are technological solutions to the crisis, but they demand political action. Together they comprise the Eight Green Steps to a sustainable world:

1. Ban waste and war: Nothing may be produced that cannot be fully recycled or that will not completely bio-degrade. This includes weapons whose sole purpose is death and destruction, and whose manufacture and use must be ended by a global community that knows war to be the ultimate act of ecological suicide.

2. Maximize efficiency and conservation: From energy to building materials, food to fiber, water to paper, our resources must be preserved. Our unsustainable consumption and wasteful industries must be made appropriate and efficient, starting with a reborn mass transit system and complete preservation of all remaining virgin land and waters.

3. Transcend fossil/nuke: King CONG (Coal, Oil, Nukes & Gas) must take its place in the compost heap of history. Our addiction to filthy, finite fossil/nuclear fuels has led us to the brink of economic and ecological collapse. In the new green millennium, we either kick the habit, or it kills us.

4. Convert to renewables: Solar, wind, tidal, geothermal, ocean thermal, wave, current, sustainable bio-fuels and their green siblings are proven, profitable and have time on their side. Each has its imperfections, and no single source will dominate. But union-made renewables sing in economic and ecological harmony, and are the ultimate job-creators.

6. Transform the corporation: Our most powerful — and destructive — institution claims human rights without human responsibilities. Corporate charters must require social service, ecological accountability and establish a barrier between capitalism and cannibalism. “Green” corporations whose legal mandate still remains limited to accumulating profits will make a mess of the planet as surely as all those that have come before.

7. Assure social democracy: Universal hand-counted (recycled) paper ballots and curbs on the power of money to sway elections are the essence of global democracy, as is the demand for social justice. Until all humans are assured the basics of life — food, shelter, clothing, health care, education — democracy and freedom are shallow illusions.

8. Empower women/control population: Where enfranchised, educated, fairly paid and in control of their own bodies, the natural union of women with Mother Earth brings us the children She wishes to support. On a healthy planet, birth rates find their natural level when all children are loved and wanted, which is where Solartopia starts.

This list follows the form of Buddhism’s Four Noble Truths and Eight-Fold Path to Enlightenment. But all religions at their core call for universal harmony between people and the planet.

[Harvey Wasserman is an author, a journalist, an educator, an activist, and a utopian thinker. His Solartopia! Our Green-Powered Earth is available at solartopia.org.]

From Ecotopia to Solartopia — A Visionary Conversation

Ernest Callenbach (Ecotopia, 1975) and Harvey Wasserman (Solartopia, 2007) discuss the role of the visionary novelist in opening public discourse to “outside the box” possibiltiies. They look at the many elements of Callenbach’s Ecotopian vision that have actually come into being (and some that haven’t yet) and explore the catalytic power of realistic hope to shape the present and the future. They agree the time has come to democratically enlarge our vision of sustainable society from local, national and regional spheres to the planetary context. For more info about Ernest Callenbach, go here.