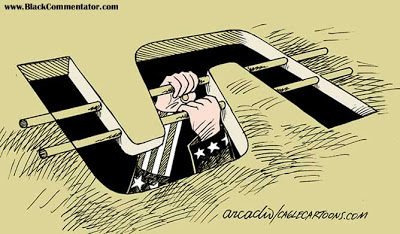 I was a junior in college on December 11, 1941, when the course of events in the United States was changed forever. I fear that I saw another sea change on January 21, 2010, when the Supreme Court handed down a decision that may be more significant than the attack on Pearl Harbor, a decision that could well alter the future and well being of our nation.

The Supreme Court in essence has provided the corporations the means to purchase the federal, state, and local governments. Those of you who heard Keith Olbermann’s special comment on January 21 understand.

This brought to mind two telling comments from Benito Mussolini:

The problem is compounded by the unchanneled anger of the American people and the total lack of leadership from the White House. Obama has ceded his historic progressive campaign platform to the Liebermans, the Nelsons, the health insurance and pharmaceutical industries, the Wall Street bankers (witness his appointees to the Treasury Department and the White House economic advisors), the Bush apologists in the Justice Department who refuse to punish the Bush clique for its crimes, and the military factions who invite terrorism here within our nation by bombing and killing women and children in foreign lands.

Naomi Klein wrote an article titled “How Corporate Branding Took Over the White House” for the Fourth Estate (distributed by AlterNet). It’s a must read, as is Paul Krugman’s article in the January 20 New York Times which he ends with the following:

“But I have to say, I’m pretty close to giving up on Mr. Obama, who seems determined to confirm every doubt I and others ever had about whether he was ready to fight for what his supporters believe in.”

Not only are we facing an even greater onslaught of corporate money aimed at purchasing our political leaders, but we are also dealing with a volatile, unpredictable American public.

In Barbara Ehrenreich’s new book Bright-Sided: How the Relentless Promotion of Positive Thinking Has Undermined America — reviewed in The Economist — sees an “ideological force in American culture… that encourages us to deny reality.” For instance she notes a popular preacher in Houston who promises that God will give big houses and nice tables in restaurants to those who sincerely wish for them. She recounts how big corporations use self-help mumbo jumbo to inform employees that they bear total responsibility for their own fates, totally absolving the employers.

Among those denying reality are the people we see at the Tea Bagger rallies, unable to make logical decisions for themselves, led by the corporate sponsors of the gatherings. These, unhappily, are the followers, who await the man-on-the-white-horse, and who will be delighted to do his bidding. They carry placards calling Obama “socialist,” (they have no idea what socialism is) when indeed he appears to be the antithesis. They probably think it’s the same thing as calling Obama a “son of a bitch.”

Given the opportunity, will these folks follow in the steps of those who stormed the Bastille, or those who burned down the Reichstag? I fear it would be the latter. Abbe Gabriel Bonnot de Mably said, “Democracy is theoretically splendid but in practice it fails through the ignorance and acquisitiveness of the masses.”

The Supreme Court made its decision two days after the debacle in the Massachusetts senatorial election. The result there should have been of no surprise considering the lack of leadership we’ve seen from the White House. On Tuesday mornings I am privileged to sit in on a discussion group of retired faculty members from a local university, including PhD’s in various areas, attorneys, retired military officers, theologians, and economists. The 18 folks there this past Tuesday, the day of the Massachusetts voting, had all been hard core Obama supporters. But Tuesday morning they all predicted the Democrats would lose the Massachusetts election because of the record of the Obama administration and its desertion of a progressive program,

The great fear was that the Democratic establishment in Washington will listen to those who preach the absurd contention that Obama “has been too liberal” rather than facing the truth that he has covertly surrendered to the special interests. There are still a few months before the 2010 elections to start pressing the jobs issue, showing sympathy for the unemployed and frightened, showing some resolve in finally supporting democracy in Honduras, correcting a century’s mistreatment of the people in Haiti — and to revisit health care reform.

There were several reasons that the Democrats lost Massachusetts. First, the hard core Obama followers were very angry and stayed home, hoping to get a message to the folks in Washington that it is time to give more than lip service to the unemployed, it is time to make some definitive changes in the Treasury and Justice Departments, it is time to take a hard look at some of White House’s close advisers — and to rethink the absurd, fruitless wars that are further bankrupting the Federal Government.

The folks in Massachusetts have been exposed to a faulty health care system on a state level that is commensurate with the Health Insurance Enrichment Act that was been passed by the United States Senate. The mainstream media and its talking heads keep extolling the Massachusetts health plan — a plan that fails to cove 11% of the residents. The Massachusetts plan, run by the insurance industry, is extremely expensive. Definitely read the article, “Massachusetts’s Plan: A Failed Model For Health Care Reform” on the website of the Physicians for a National Health Program

Currently there is intense discussion among Democratic leaders about how to move forward with health care reform. I would suggest that first we start acting like a party in power and legislate in a normal fashion, even if that should mean facing defeat in the legislative process. We must stop deferring to the blue dogs, the quasi-Republicans within the Democratic party.

The electorate in the autumn of 2010 will not vote for a group of sniveling politicians without conviction or courage. We must go after jobs, jobs, jobs, stressing to the public that we are in this sad situation because of Republican economic policy and the fact that in the past eight years our capitalist system has made unprecedented profits by shipping jobs overseas and obtaining cheap labor there at the expense of the American worker.

We must admit that a rebounding stock market has nothing to do with the prosperity of the average American, but is an index of corporate profits, achieved by cutting employment, outsourcing jobs, paying low wages. Our unemployment rate is over 10% and even that isn’t a realistic figure. Unlike the Europeans, who report actual unemployment, our statistics include only those who are getting unemployment insurance and not those whose insurance has run out, those uninsured all along, or those working part time.

There is time to revise thinking on health care, but not before the State of The Union address. Perhaps this is just as well, for if the president is interested in the support of the American people he will propose a plan that will meet these criteria:

When we see the end of pharmaceutical ads on TV and are allowed to buy prescription drugs from abroad we will know that decent health care has finally arrived.

Erie, my home base, is in the northwest corner of Pennsylvania. I practiced rheumatology here for 40 years, retiring in 1990. Our population is about 200,000 — largely Democratic in the city, Republican in the county and surrounding area.

There is that old comment about Pennsylvania politics: “There are Pittsburgh and Philadelphia, with Alabama in between.” The Erie area is a bit of each. We had a Republican Congressman for many years, and currently a lady, something of a blue dog, but with a generally progressive voting record.

The area was once a manufacturing hub — plastics, foundries, American Sterilizer, G.E., Hammermill Paper, etc. – now all gone. We are largely dependent on tourism and medical centers. We have an active Unitarian Universalist congregation, three orders of very socially conscious nuns, and two generally progressive colleges — though we are not Berkeley, Austin, or Madison.

I give this overview of our area because on January 21 the Erie Times News, a very Republican newspaper, ran a poll asking, “How would you rate President Obama’s performance in his first year in office?” (Obama ran well here.) The poll showed the following: 52.2% Poor; 36% Average; 11.8% Excellent. To be fair, the editorial pages of the ETN are filled with Charles Krauthammer, Jonah Goldberg, George Will, David Broder and Michael Gerson — with just a dash of E.J. Dionne, Eugene Robinson, and Cynthia Tucker.

Still, I find this poll alarming and further evidence that the President must once again demonstrate that he has interest in, and compassion for, the average person. And do it PDQ.

1 Response to Health Care and Campaign Finance : The Corporate Stranglehold