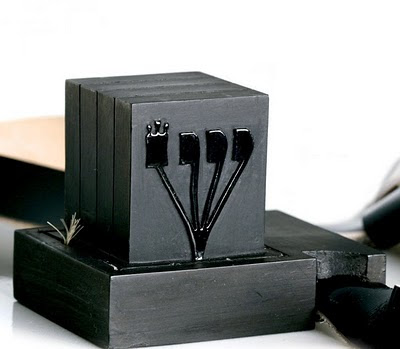 Fear of flying:
Tefillin or TNT?
Bomb or biblical blessing?

To say that the threat of terrorism has America’s airline passengers a bit goosey is an understatement. Yesterday, Jan. 21, 2010, a US Airways Express flight from New York to Louisville, Kentucky, was diverted when passengers saw a young man attaching two small black boxes to his body, example above, lashing one to his forehead and the other to one arm with long black straps. He then began chanting in some foreign language. Passengers were sure they were about to be blown up by a fanatical suicide bomber.

In fact, a teenage Orthodox Jewish passenger from White Plains, N.Y was merely doing his morning prayers as prescribed in Deuteronomy and Exodus in the ancient Orthodox Jewish Torah.

Passengers and crew, like a majority us, were no more familiar with the “Mitzvah of Tefillin” than they were with the “mixture for teflon.” The imagined, seemingly menacing “little square suicide bombs clearly showing four embedded detonating circuit wires on their sides” immediately put the plane into terrorist mode. The pilot diverted and landed in Philadelphia just to be sure. He didn’t realize that he had elected to unnecessarily land “on a wing and a prayer.”

More on the little black boxes and the long black leather straps used to bind them to the body in a minute.

How ridiculous would it have sounded just six months ago if someone had warned you that the person in seat 14-C could be wearing deadly explosive underwear? Well, by now we have probably all seen the close-up photos of the young Nigerian’s underwear loaded with a Play Dough-like substance after his foiled attempt to blow up an Amsterdam to Detroit, Michigan, flight on Christmas Day December 25, 2009.

The stuff in the underwear was the same thing that was inside Al Qaeda terrorist Richard Reid’s infamous shoe bomb. It was packed with PETN but failed to detonate on a December 22, 2001, American Airlines flight from Paris to Miami. PETN or pentaerythritol trinitrate, is one of the most powerful explosives known.

Just researching this stuff is frightening. A tiny 100 grams or 3.5 ounces of it will destroy an automobile. A box of Jello weighs 3 ounces. And PETN is stable enough to carry around an airport boarding lounge without exploding. But a hard shock or secondary chemical can set it off with deadly effect. Reid had worn the PETN-laden shoe a whole day before his flight and investigators say that the fuse to start the ignition got damp from his sweaty feet and fizzled when he tried to light it. Passengers pounced and Reid is doing life in prison today.

The young Nigerian Muslim fanatic, Umar Farouk Abdulmutallab, mercifully also botched his attempt to blow up Northwest flight 253 and the 289 souls on board on Christmas Day December 25, 2009. An eagle-eyed passenger saw smoke coming from the man’s lap and physically restrained him while other passengers and crew used a fire extinguisher and then immobilized the would-be suicide bomber.

Here are illustrations from an Orthodox Jewish web site showing precisely “how to lay tefillin” or how to properly put these prayer-assist items onto the head and arm. They are also called “phylactery,” or small leather boxes containing Hebrew texts: 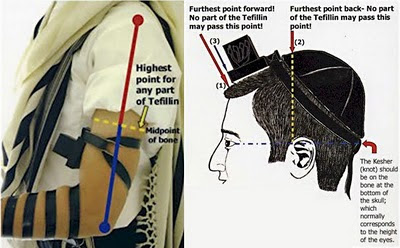 Clearly your average American airline passenger and lots of Reform Jews are probably not up on the incredibly complex kosher rules for “laying tefillin” or properly donning the little black cubes in order to do morning prayers.

And it took a little poking around to find out what the “V” shaped four “circuit-board” lines going down into a single point are. It is the embossed letter “Shin” from the Hebrew alphabet that stands for the word Shaddai, a name for God… not detonator wires to set off PETN.

The 17-year old on the US Airways flight and his 16-year old sister were completely cooperative as they explained the innocent daily morning religious ritual. Officials said the kids, “were more alarmed than we were.”

In 2008, Jordanian border officials refused to allow a group of Israeli tourists carrying religious objects, including the little tefillin black boxes, to enter their country saying it was “a safety measure” to avoid potential terror threats. So go figure… clueless Americans saw the chanting kid with the little boxes strapped to his body as a threat. Who knows what the Muslim Jordanian’s reasons were other than possible religious harassment?

The legendary Bob Dylan put on the ancient tefillin and a religious shawl while performing in Israel and an enterprising Jen Taylor Friedman is notorious for having created a Tefillin Barbie. Photos of both are below.

My apologies to Rabbi Aryeh Kaplan and his helpful web page on Tefillin for any shortcomings in my cursory research to help us understand this ancient Orthodox Jewish parallel to rosary beads, swinging incense censers, wearing religious medallions and other similar physical devices used as prayers are offered. 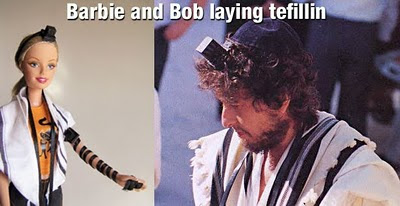