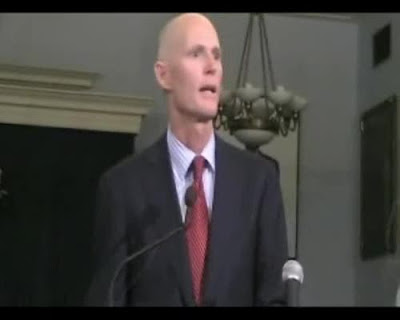 Though conservatives portray the tea bagger disruptions as symptoms of a populist rebellion… they have to a great extent been orchestrated by anti-health care reform groups financed by industry.

See ‘Recess Watch: Conservatives Shout Down Health Care, Doggett In Austin,’ by Mark Ambinder, plus Video of Austin demonstration, Below.

On Friday, July 24, a representative of Conservatives for Patients Rights — the anti-health care reform group run by disgraced hospital executive Rick Scott, in conjunction with the message men behind the Swift Boat Veterans for Truth — sent an email to a list serve (called the Tea Party Patriots Health Care Reform Committee) containing a spreadsheet that lists over one hundred congressional town halls from late July into September.

The email from CPR to tea baggers suggests that, though conservatives portray the tea bagger disruptions as symptoms of a populist rebellion roiling unprompted through key districts around the country, they have to a great extent been orchestrated by anti-health care reform groups financed by industry. (CPR did not immediately respond to a request for comment.)

That email predates by about a week a recent flurry of events at which Democratic members of Congress [including Texas Democrat Lloyd Doggett of Austin] have been accosted and harassed by anti-health care reform tea party protesters. But beyond putting those spectacles, now receiving wide play on cable news, into a fresh light, it also provides a window into the tea party protesters’ organizing infrastructure, which, like so much political organizing today, occurs in private email list serves.

Earlier today [Monday], I reported that a Freedom Works volunteer, and tea party protester, named Robert MacGuffie had authored a strategy memo for his fellow activists — a playbook of sorts for protesters seeking to disrupt and harass members of Congress during town hall forums in their districts.

MacGuffie and four friends lead a group called Right Principles, described as “a communication and organizing platform so those for whom our core beliefs…ring true.” Despite his connection to Freedom Works, MacGuffie insisted to me that his group is unaffiliated with the wealthy conservative interest groups that have fronted the right wing tea party events.

But his memo nonetheless found its way to hundreds of tea party activists, including the very organizations MacGuffie insists he’s unaffiliated with.

MacGuffie’s memo was posted to the Tea Party Patriots’ list serve, which is hundreds of members large, and includes representatives from not just small protest groups, but also major anti-health reform organizations such as Conservatives for Patients Rights, and Patients First, Patients United Now (an affiliate of Americans for Prosperity), and, yes, Freedom Works.

With such broad and powerful memberships, the group is able to coordinate protests and counter protests at events hosted by members of Congress and pro-reform groups. And that’s just what they’ve been doing, and plan to do much more over the August congressional recess, during which many believe the fate of health care reform will be decided.

This isn’t the first time private correspondence on these list serves has opened a window into the tea bagger id. Last month, TPMMuckraker’s Zack Roth broke the story of Dr. David McKalip — a high profile anti-health care reformer who forwarded a racist email to fellow activists on what Zack described as a “Google listserv affiliated with the Tea Party movement.” Once exposed, McKalip withdrew from public activism, to the great, effusive dismay of his supporters on that list. In addition, then, to organizing shout downs at town halls, these list serves are used as a hub for those who like to guffaw at pictures of Barack Obama with a bone through his nose.

It’s August, and lawmakers are back in their home states talking to constituents. Liberals and conservatives alike will show up to town-hall meetings and other events to question their elected officials–sometimes loudly–about health care and the rest of Washington’s business, as lawmakers make the case for their own agenda. When passions run high, debate can be spirited. We’ll be watching.

Rep. Lloyd Doggett, the Democrat who represents Austin, Texas, has never won with less than 67 percent of the vote in his district. But that didn’t stop conservatives from shouting him down as he tried to talk to constituents about health care over the weekend.

Sign-waving conservatives chant, very loudly, “Just Say No,” making other conversations (including Doggett’s) inaudible. One protester has a sign that show’s Doggett with devil ears springing from his head. They follow Doggett from the event across a parking lot, where he tries to talk to some more people and then leaves. Politico, reporting on Doggett’s experience and others, notes that Rep. Patrick Murphy (D-PA), a Blue Dog a former Army captain who served in Iraq, also had to deal with a shouting audience and urged them to “be respectful.”