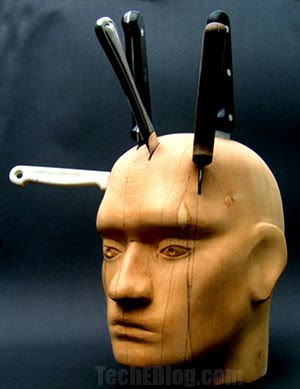 Health care debate: it even hurts to listen. Image from A Blog of My Own.
High drama at Blair House:
The Republican response and the ‘independent voter’

With considerable concentration I endured the ennui and was able to watch much of the recent TV “debate” on health care. I must admit that save for the President and a few Democratic Congress-folks, the Republicans were much better choreographed and were able to impart their “message” with more vigor and zest. A message directed largely at the “independent” or swing voters who are generally the least informed and most detached part of the electorate,

These are the folks that our TV commentators would have us believe live with a civics textbook in one hand and a copy of the Constitution in the other. When I hear the likes of Wolf Blitzer work under this assumption I am reminded of the “good Germans” of 1932-1944 who were not imbued with Nazi doctrine or anti-Semitism but periodically read Dr. Goebbels’ newspapers, watched Leni Reifstahl’s propaganda films, thumped their beer mugs and sang the Horst Wessel Song at Octoberfest — and lived in fear, terrified that the Poles would attack them from the east.

These people, moved by unemployment and uncertainty, were only too glad to go to war in 1939 when, according to Dr. Goebbels, the Poles had attacked German border posts and killed several small garrisons manning these posts.

At a recent upscale cocktail party full of professional and executive types, I was chatting with a local business leader, but unfortunately allowed the conversation to devolve into a discussion of Social Darwinism. He became visibly angry when I mentioned the U.S.A.’s 700-plus military bases around the world. He took great umbrage, asking me where I had gotten such an unpatriotic and absurd idea.

I referenced Chalmers Johnson’s book The Sorrows of Empire, and also suggested he research the question on Google. He responded by muttering something about “darned liberals” and removed himself to more cordial surroundings. It is people like this gentleman, along with the tea-baggers, who proudly carry absurd signs and write anonymous angry letters, lacking in facts, to various publications. The inclination is to become upset with such persons, but perhaps pity would be more appropriate.

Returning to The Blair House seance, and the Republican response, I was reminded of a pocket-sized volume, by Dr. Harry G. Frankfurt, a retired moral philosopher at Princeton University. It’s title: On Bullshit. The opening paragraph:

One of the most salient features of our culture is that there is so much bullshit, Everyone knows this. Each of us contributes his share. But we tend to take the situation for granted. Most people are rather confident of their ability to recognize bullshit and avoid being taken in by it. So the phenomena has not aroused much deliberate concern, nor attracted much sustained inquiry.

The remaining 67 pages have to do with the difference between bullshit and out and out lying, or the purposeful spreading of deceptive misinformation. All who are students of the Republican spin machine should avail themselves of Dr. Frankfurt’s publication.

One of my first observations, as a retired physician, was that three of the Republican attendees were physicians. All three of these elected representatives were from the high-paid surgical specialties. They generally defended the status quo.

One of the great concerns that face this country, and I have alluded to this in prior Rag Blog articles, is the fact that the United States is greatly lacking in primary care physicians — internists, pediatricians, and general practitioners. Doctors in these fields are not only in short supply, but are also underpaid, probably making 10% net of what our physician Congresspersons took home before becoming politicians.

Not once did the Republican doctors suggest the need for government subsidy to train more primary care physicians, nor did they rise to the defense of these doctors who are headed for a 12% reduction of their income under the current Medicare provisions, something that the American College of Physicians has repeatedly warned us about. If we do not train more primary care doctors and pay them adequately, those on Medicare will soon have great trouble finding a physician. This is a legitimate fear. (Forget the ridiculous Republican contention that the Democrats intend to cut funding for Medicare benefits.)

Decent health care legislation will decrease the excessive profits made by private insurance companies for underwriting Medicare Advantage programs, will phase out the terrible drain on the Medicare Trust Fund produced by the Medicare Part D program, and will provide adequate policing of fraud and deception in the administration of the program, thus helping to fund the present Medicare program.

I would suggest that holders of Medicare Advantage polices ask their providers this question: “If I am seriously ill, and want to make an appointment at the Mayo Clinic, will you pay for it?” My regular Medicare will not interfere with my choices, but when my late wife had a far advanced cancer, when we were under Medicare Advantage, and wished to go to the Sloan-Kettering Clinic, we were informed that it was “out of area”; hence, we paid Sloan-Kettering ourselves.

Unfortunately, neither the President nor any of the Senators chose to promote the need for a “public option,” an omission that should greatly concern all of us, since single payer, or Medicare for All, has been ruled out. There was some impetus given to including the Health Insurance Cartel under anti-trust law — a must if we are to control prices (and without price control the entire exercise is futile). It should be noted that the House has now passed this legislation with Republican support.

There appeared to be unanimity of opinion, even with some Republican assent, that there should be insurance available for those with pre-existing conditions, and that the insurance companies should be banned from the capricious policy of dropping of an insured individual when he/she becomes ill. The cost differential to those with pre-existing conditions was not addressed. The matter of “mandates” the purchase of insurance was left open. I was initially opposed to the idea of mandates; however, I now realize the need it for spreading the pool of the insured — if it is administered with foresight.

The matter of taxes to finance the program was addressed, but far from settled. I personally favor the House plan to increases taxes on the upper 1% of the wealthy, rather than taxing the insurance benefits of the middle class. (A year ago I learned about a vault in a Swiss bank that collapsed under the weight of gold bullion stored there by the American well-to-do during the financial crash of 2008.)

Nothing was even mentioned regarding the excessive salaries and bonuses of the insurance and pharmaceutical CEOs or the billion dollars a year added to our prescription drug prices by the money spent on TV advertising for prescription drugs. The Republicans still blabber about “tax-deductible health care savings accounts,” which would be great for those with six figure salaries.

There was some discussion about those forced to buy cheaper insurance having a $3,000-5,000 deductible and thus, though insured, being unable to afford routine medical care. There was passing mention of the fact that under many insurance policies the insurer, rather than the physician, determines how long a seriously ill person can stay in a hospital. Little concern was expressed about the fact that much of the Senate Bill would really not become active for 3-4 years.

The malpractice bogeyman was repeatedly raised by the Republicans, though costs stemming from malpractice suits affect less than one third of one per cent of current medical care. Granted this may be a minor factor in overall costs; however, I believe that it is an issue that should be legislated separately — taking into account the absurd contingency system of payment of lawyers in the United States, the fact that the malpractice insurance companies are not covered under antitrust laws, and that there should be much better surveillance of physician disregard for conscientious practice patterns. Perhaps we should take a look at the uncontroversial Canadian system of malpractice insurance.

At the end of the debate I was reminded of a paragraph in Steven Hill’s great book Europe’s Promise. He tells us that

Russell Shorto, an American writer living in Amsterdam, reporting that when he lived in the U.S. with his family of four, he paid about $1400 a month for a policy that didn’t include dental care and was rife with co-pays, deductibles, and exemptions of coverage. A similar Dutch policy, by contrast, has cost him about $390 per month with no co-pays, and included dental coverage; about 90% of the costs of his daughter’s dental braces was covered.”

The Netherlands does not have “socialized medicine”; all citizens, who are required to participate, are covered by private, nonprofit insurance. Obviously, if a nation has a will, a realistic program can be worked out — a program that does not require 2,000 pages of legislation. HR 676 — which has been largely ignored by Congress even though is is backed by the majority of physicians, nurses, health care professionals, and union members — is included in only 30 pages of legislation.

Asclepois, from the Medicare Rights Center, is now available on Twitter, and you can sign up for the newsletter here. Current articles report that health reform will improve Medicare drug coverage, and that health reform will strengthen Medicare’s financial outlook as well as making Medicare more affordable and improving the quality of Medicare. This non-profit, Medicare consumer advocacy update is available weekly.

Finally, Jim Hightower reports that “Big Pharma Divorces Billy Tauzin,” the ex-congressman from Louisiana who guided the Bush Administration Medicare give-away to the insurance cartel and PhARMA via the Medicare Part D drug plan. Immediately after Tauzin did that for the Bush administration he was hired as a lobbyist for the Pharmaceutical Industry at $2 million per year.

But poor Billy cut a deal with the Obama White House that cost him his job.