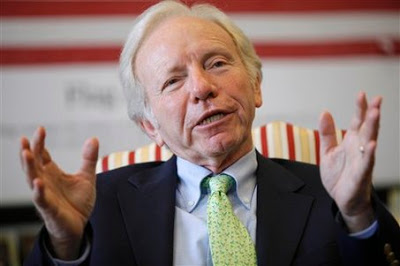 It looks like the United States Senate is going to cave in and surrender to Joe Lieberman. They first dumped the most important part of health care reform — the public option. This was the part of the reform bill that would offer inexpensive and decent health care insurance to Americans, and would force the private insurance companies to lower their prices to compete. But Traitor Joe didn’t like it, so it’s gone.

But that wasn’t enough. The Senate then tossed out a compromise idea — the creation of a private non-profit insurance program that would be overseen by a federal government agency. Although not as good as a true public option, this would have also caused some downward pressure on insurance premiums and saved consumers a ton of money. But Traitor Joe didn’t like it, so it’s gone.

Still, that wasn’t enough. Now the Senate is willing to toss out an expansion of Medicare to those between 55 and 64. At age 55, people are entering the years where they are much more prone to medical problems than younger Americans. This would have guaranteed they would be covered by a government insurance program that has been proven to work efficiently and effectively (just ask someone over 65 if they would give up their Medicare). But Traitor Joe didn’t like it, so it’s gone.

I’m beginning to think if Lieberman wanted Senate Democrats to kiss his scrawny ass, most of them would line up, get on their knees and pucker up. Are there any real Democrats left? Do any of them have even a remnant of a spine? Where are the progressives who promised us real health care reform?

All we are left with now is a bill that would force ordinary Americans to give the large private insurance companies a gigantic payday. And they would be forced to do it without getting lower costs or better health care. This bill would still leave medical decisions in the hands of insurance companies rather than doctors. Personally, I am appalled.

I think any Senate progressive with a functioning brain and a fully-developed conscience should vote against this travesty of a bill that is empty of any real health care reform. And it looks like Howard Dean agrees with me. He told Vermont Public Radio the following:

This is essentially the collapse of health care reform in the United States Senate. Honestly the best thing to do right now is kill the Senate bill, go back to the House, start the reconciliation process where you only need 51 votes and it would be a much simpler bill.

I urge any remaining progressive senators — don’t check your conscience at the door to the Senate chamber. Vote against this bill. Kill it, then start over and do it right.