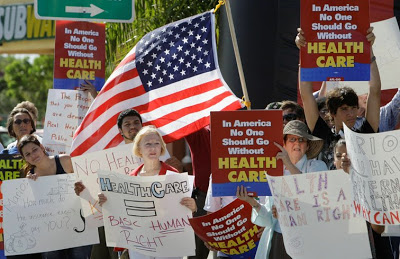 Unhappily, the current situation is much more ominous than simply the denial of proper health care. The encouragement of mob violence by the corporations and the blackshirts they are stirring up begins to cast a pall over our daily life.

Meaningful, caring revision of our health care system has definitely screeched to an unhappy, unforgivable, but not unforeseen halt.

We should note that the cupidity and avarice exhibited by members of a senatorial body can be seen throughout history. When Marcus Titus Cicero announced for election to Consul in the first century BCE he found to his dismay that many members of the Senate, which was the electoral body, had been bribed and were about to support his opposition. Only with hard work, courage, and leadership did Cicero overcome the obstacles and ultimately achieve his supreme imperium.

President Obama was elected largely by progressive visionaries who have supported the concept of universal health care throughout the discussions appropriate to the election and subsequently when he was blathering about the obviously illusionary concept of bipartisanship. Last week the President admonished his dedicated supporters, in essence, to “lay-off’.”

It would seem that Obama, who likes to draw parallels to Abraham Lincoln, has found a new Civil War ideal. We are now in the era of emulating General George McClelland conducting the Peninsular Campaign. McClelland, in 1862, faced inferior forces, inferior equipment, but never took Richmond because of lack of desire and purpose. If he had shown courage Lee might have been defeated then rather than in 1984,

Thus, the progressives who desire something better for our country, the American people, and the status of the nation in the world at large, are hamstrung by a system that is near impossible to overcome. The August 3, New Yorker Magazine makes the following point:

“In other free countries, legislation, social and otherwise, gets made in a fairly straightforward manner. There is an election, in which the voters, having paid attention to the issues for six weeks or so, choose a government. The governing party or coalition then enacts its program, and the voters get a chance to render a verdict on it the next time they go to the polls. Through one or another variation of this process, the people of every other wealthy democracy on earth have obtained for themselves some form of guaranteed health insurance or universal health care.”

Rep. Dennis Kucinich, in an excellent article in the July 2009 Progressive, notes:

Yet because of the perfidy of the Congress, and the obfuscation of the executive, which shows a frightening tendency to be on the verge of self immolation, the process appears to be coming to a dead halt. Much can be said of the hypocrisy and avarice of the Senate Finance Committee, whose home districts’ combined resident populations account for less people than reside in the New York City area.

It is interesting to note that the poverty rates are higher and the per-capita incomes are lower in these legislators’ specific districts than in the nation as a whole. Add to this that obstruction in The House can occur in The Commerce Committee which includes seven southern Democrats. Blue Dogs, who are opposed to universal health care. In addition we are currently faced with the greatest program of lies, deceitful advertising, and misinformation that the nation has been subjected to in its history. This propaganda is obvious on talk radio, Fox News, and in the conservative press.

However, much of TV is complicit. CNN, for instance, reports these events as straight news with no effort to point out the well financed forces behind the disinformation. Thankfully MSNBC on weekday evenings has been filling us in on the frightening story behind these disruptions; however, the MSNBC audience consists of only a few million viewers who are already well educated and informed. The intrusion by mobs into town hall meetings presided over by our elected representatives has never been heard of in the history of the republic, yet the story behind it remains largely concealed by the MSM.

Rachael Maddow this past Wednesday revealed the names of the political consultants and big money backers who are selling the crazy, endless conspiracy theories that health care reform is communism, that it is a secret plot to kill grandpa, and that it is a government takeover that is going to mandate abortions and sex-change operations. In some ways these wingnuts have confused the making of a living will with a plot to kill people.

The folks behind this despicable crap include such reactionary organizations as Michael Malkin, the Red State Blog, and such vaguely named groups as Freedom Works, American Majority, Americans for Linited Government, and the Sam Adams Alliance. The director of the American Majorities Minnesota office was a regional director for the Bush-Cheney ‘04 campaign; the Kansas office, a former Republican state legislator. The Sam Adams Society is run by a former director of the Illinois State Republican Party. Sam Alliance is headed by a former Dow Chemical Engineer, and Americans for Prosperity is run by Art Pope, a North Carolina millionaire who for years has given millions to The Republican Party.

The common denominator for all is the fact that they are paid quite well — an estimated 1.4 million dollars per day, by the insurance cartel, the pharmaceutical industry, the medical equipment industry — to confuse, misinform, and lie to the uneducated, American public. These corporations will gladly deny the American people the health care that is obtainable in every other country of the industrialized world to maintain their obscene profits, multimillion dollar executive salaries and bonuses, and stockholder dividends.

If you wonder where much of the pharmaceutical industry’s income goes, merely watch TV for an hour or so and you will see that nearly every other commercial is sponsored by a drug company, drug companies that spend approximately 17% of their income on basic research according to Marcella Angel, prior editor of The New England Journal of Medicine.

The opponents of health care reform cite costs. These are the same folks who do not concern themselves with costs relative to foreign military adventures, but feel that it is in some way wrong to spend taxpayer money to help defray the costs of cancer care, child health care, and public health programs for the American taxpayer.

In truth, the program promulgated, and well documented, by The Physicians for a National Health Program would cut national health care costs by approximately 30% and at the same time provide health care for all, with free choice of physician, medical specialist, hospital, nursing home, and pharmacy. Prescription drug prices would be reduced to be commensurate with the prices in Canada or Europe. The concerns of bankruptcy or job loss and insurance would be eliminated. More family physicians would be trained, and yes, they would be better paid than now, and might even make house calls as they do in various European Countries.

The Congress will not even consider such care, since, due to the baksheesh they receive, they are willing to allow the citizen continue with health care rationed by the insurance companies, and dictated to the physicians by insurance company bureaucrats. And the Republican’s keep raising the issue of “tort reform” when indeed malpractice issues cost but a fraction of 1% of total health care spending. Another distraction is malpractice, an issue that must be dealt with but not be used as a silly issue to derail matters of importance.

Unhappily, the current situation is much more ominous than simply the denial of proper health care. The encouragement of mob violence by the corporations and the blackshirts they are stirring up begins to cast a pall over our daily life. Many serious political thinkers believe that we could be facing the Rubicon and if the right wing extremists among us are allowed to cross, that the United States as a democratic nation will be no more.

I would encourage all thinking people to read the Rag Blog article by retired history professor Sherman DeBrosse , entitled “Extremism and Right Wing Populism: The Face of the Republican Party,” as well as Frank Schaeffer’s piece entitled “Right-Wing Turncoat Gives Inside Scoop on Why Conservatives Are Rampaging Town Halls.” I would also recommend Professor DeBrosse’s new book “The New Republican Coalition, Its Rise and Impact,” now available through Barnes and Noble or Amazon.

Unfortunately it may be very difficult to sustain support for a health care program provided in the best interest of the American public, since that public seems more likely to be swayed by slogans and propaganda — enhanced by fear — than by reason. The proponents of decent health care have little funding with which to educate the public, as opposed to the billions being spent to mislead.

We must keep trying and hoping, but I trust, as an elderly physician, that if congress is about to pass a bill which is a farce, and a concession to the insurance industry, that the progressive members of The House of Representatives will stand as one and vote “No.” Better to try again in two years for real reform than produce a Frankenstein monster under the guise of “insurance reform.” As long as the insurance industry is in control they will find methods to circumvent and deceive.

As for the thugs that are denying democratic process at the town halls, the true believer cast-offs from the pro-life movement that would appear to sanction assassinations, and the unquestioning gun toters who pervert the historical and grammatical content of The Second Amendment, a thought from Eric Hoffer:

” The effectiveness of a doctrine does not come from its meaning but from its certitude. No doctrine however profound and sublime will be effective unless it is presented as the embodiment of the one and only truth. It must be the one word from which all things are and all things speak. Crude absurdities, trivial nonsense and sublime truths are equally potent in readying people for self sacrifice if they are accepted as the sole, eternal truth.”

7 Responses to Health Care Reform : Screeching to a Halt?