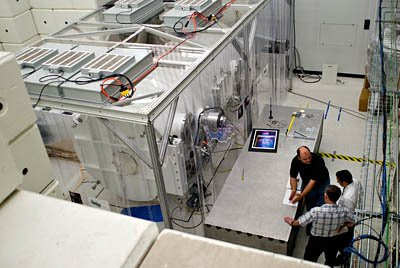 UT houses a laser, nestled in a cramped basement room, that created the brightest light in the universe for fractions of a second March 31, beaming the University into the international spotlight.

After four years under construction, the Texas Petawatt laser reached 1.1 petawatts of power, making it the most powerful laser in the world. The only other laser that can reach petawatt capacity is in the United Kingdom.

The laser sits on a 30-foot-long table in a room that filters particles out of the air. Hundreds of optic components are hand-bolted to the table to create a pathway for the laser beam to compress and amplify the energy. This process keeps the light beams from damaging the equipment and still generates as much energy as possible.

The beam ultimately travels about 200 feet back and forth through a series of optics and amplifiers until it reaches its target that rests in a chamber about the size of a kickball.

Todd Ditmire, a physics professor and the director of the Texas Petawatt project, explained the laser’s power. The sunlight that falls on the state of Texas yields 100 trillion watts. A petawatt is the equivalent of 1,000-million-million watts of energy.

The power focuses on an area one-tenth the width of a human hair and occurs fast enough for 1 million laser pulses to stack end to end in the time it takes to blink an eye, said Mikael Martinez, Texas Petawatt’s project manager. Dimensions as small as this create temperatures up to 10 million degrees Celsius, hotter than the center of the sun.

This creates conditions similar to the center of stars, allowing scientists to understand astrophysics in previously inconceivable ways.

“With lasers like this, we can bring some of that down to earth in a laboratory,” Ditmire said.

The Texas Petawatt’s unique system of shortening the pulse and amplifying light energy to generate so much power also enables the system to create neutrons that aid in understanding how nuclear reactors age over time.

Martinez hopes the laser, which has undergone construction since 2004, will continuously generate enough power by the end of the summer to fire its first shots.

“This makes us extremely proud,” said Martinez, who added that the laser appeared on Wired.com.

“Other people have impressive lasers, but this puts us in an internationally unique regime where we can perform high-density experiments that no one else can.” 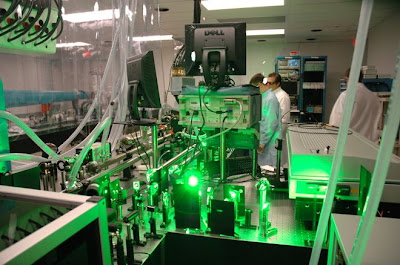 Scientists have switched on the world’s most powerful laser, which for one-trillionth of a second is 2,000 times more powerful than all the power plants in the United States. The laser’s output tops a petawatt, which is a quadrillion (1,000,000,000,000,000) watts of power.

In the basement of the physics building at the University of Texas at Austin, the school’s High Intensity Laser Science Group built a petawatt laser in hopes of recreating astronomical phenomena like supernovae in miniature.

“We can put materials into states that you can’t access here on earth,” said Mikael Martinez, the laser project’s manager. “You’d have to go out into space and hang out with an exploding star to observe what we plan to observe here in Texas.”

When the scientists turned on the laser on March 31, it became the world’s most powerful operational laser, but it doesn’t yet hold the record for the most powerful laser ever built. That honor, at least for a few more months, belongs to the now mothballed Nova laser built at Lawrence Livermore National Lab. The Nova produced 1.25 petawatts of power when it was first switched on in 1996. Martinez said he expected his project to break that record within the year, reaching between 1.3 and 1.5 petawatts.

Below, we take a virtual walk through the tech — amplifiers, compressors and crystals — that make this Texas-size laser so powerful.

The power of a laser, its output in watts, is determined by the energy of the laser pulse, measured in joules, divided by its duration, measured in seconds (tiny fractions of a second in this case). So, to get high power, you can either turn up the energy or cram the same amount of energy into a shorter duration pulse — or do both. The problem is that turning up the energy makes it more difficult to get short pulses.

The solution to this problem require an almost Rube-Goldberg setup inside a 1,500-square-foot cleanroom. The most powerful laser in the world starts, poetically enough, with a “seed laser” that puts out a wimpy nanojoule of energy for a couple hundred femtoseconds (that’s 10-15 seconds). It must be run through a series of amplifiers, compressors, and stretchers before it can recreate the conditions inside the sun for a trillionth of a second.

But Can it do This?

Thanks to Burnt Orange Report.

This entry was posted in RagBlog and tagged Energy, Nature, Science, Texas. Bookmark the permalink.