How Will We Stop These Illegal US Incursions? 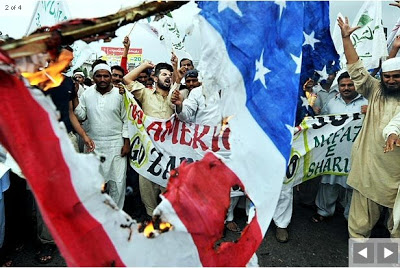 The disclosure is certain to further anger Pakistan’s military, whose Army chief said on Wednesday that Pakistan would not allow foreign troops to conduct operations on its soil, after a cross-border incursion last week by U.S. commandos.

The new orders reflect concern about safe havens for al-Qaida and the Taliban inside Pakistan and an American view that Pakistan lacks the will and ability to combat militants, the Times said.

“The situation in the tribal areas is not tolerable,” said a senior U.S. official who spoke to the newspaper on condition of anonymity. “We have to be more assertive. Orders have been issued.”

The newspaper said the orders also reflected a belief some U.S. operations had been compromised once Pakistanis were advised of the details.

Helicopter-borne U.S. commandos carried out a ground assault in Pakistan’s South Waziristan, a sanctuary for al-Qaida operatives, last week, the first known incursion into Pakistan by U.S. troops since the 2001 invasion of Afghanistan. The raid killed 20 people, including women and children.

Army chief General Ashfaq Kayani Kayani said in a statement on Wednesday: “The sovereignty and territorial integrity of the country will be defended at all cost and no external force is allowed to conduct operations … inside Pakistan.”

“There is no question of any agreement or understanding with the coalition forces whereby they are allowed to conduct operations on our side of the border,” he said.

The U.S. action complicated the situation for Pakistan’s new civilian president, Asif Ali Zardari, who was sworn in on Tuesday, having forced former army chief Pervez Musharraf to stand down last month after nearly nine years in power.

Zardari, like Musharraf, has vowed to defeat the Taliban and support the West’s mission in Afghanistan, but the civilian government has to pay more heed to public opinion than Musharraf had done in a country rife with anti-American sentiment.

At the same time, Pakistan is highly vulnerable to any reduction in U.S. financial support, given the rapid depletion of Pakistan’s foreign currency reserves, which has sparked talk the country could default on a sovereign bond early next year unless it gets billions of dollars of foreign financing.

Bush, days before his final 9/11 anniversary in office, said this week he will send more troops to Afghanistan as his top military officials told Congress America was not winning a fight against the nearly seven-year insurgency.

“I’m not convinced we are winning it in Afghanistan. I am convinced we can,” he said, offering a sober assessment nearly seven years since U.S.-led forces toppled the Taliban after the September 11, 2001, attacks.

Violence in Afghanistan has soared during the past two years as al-Qaida and Taliban fighters have regrouped in the remote region between Afghanistan and Pakistan.

“These two nations are inextricably linked in a common insurgency that crosses the border between them,” Mullen said.

“We can hunt down and kill extremists as they cross over the border from Pakistan … but until we work more closely with the Pakistani government to eliminate the safe havens from which they operate, the enemy will only keep coming.”

U.S. commanders in Afghanistan have requested three more combat brigades, about 10,000 soldiers. About 33,000 U.S. troops are already there, including 14,000 who are part of a 53,000-strong NATO military command.

The officials said the West should do more to help Afghans with new investments in roads and other infrastructure, education and crop assistance.

“These are the keys to success in Afghanistan,” said Mullen. “We cannot kill our way to victory.”

He said Afghanistan badly needed a national security force supported by local leaders. Gates supports an Afghan government proposal to double the size of the country’s army by creating an active-duty force of 122,000 troops by 2014.

However, U.S. reinforcements depend on Washington’s ability to reduce forces now deployed in Iraq, where the Bush administration has waged an unpopular war that critics say distracted attention from Afghanistan and al-Qaida.

This entry was posted in RagBlog and tagged American Hegemony, Pakistan, U.S. Aggression. Bookmark the permalink.