Indentured College Graduates: How the Capitalist System Locks in the Slaves

I could write a book about this: the capture of innocent young people into a system that requires them to pay off their student loan debts for years as they try to start lives and Families. The way the capitalist system operates is a disgrace to us all, and it’s high time we took back our nation and our lives. 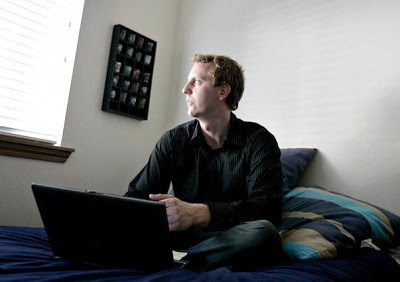 Tyson Hunter graduated from Boston University last year with a bachelor’s degree — and $152,460 in student loans. His loan payments will eat up about a third of his monthly income, so he has moved into his mom’s Bothell condo to reduce expenses. Photo: John Lok/The Seattle Times
Graduates drowning in debt from high cost of college
By Nick Perry / October 5, 2008

College graduates are starting work with twice as much debt as in the mid-1990s. For many, the burden of loan repayments is constraining big decisions, from picking a career to buying a house.

Tyson Hunter dresses sharply, works out most every day and can’t wait to make his mark on the business world.

Hunter, 23, also happens to owe $152,000 in student loans, accumulated in four years at Boston University. He graduated last year with a bachelor’s degree in business administration, and now earns $40,000 a year at a market-research company.

His loan payments soon will top $1,000 a month — the amount of a small mortgage, and about a third of his salary. If he makes the minimum payments, he will retire his student debt when he is 53 years old, having handed lenders some $300,000.

“Buying a house? That’s not even in the 10-year goals,” says Hunter, who has temporarily moved back into his mom’s Bothell condo to reduce expenses. “The next two years are going to be crippling. Hopefully, after that, it won’t be as crippling.”

At a time when deep uncertainty permeates the economy, graduates across the country are entering the workplace with staggering liabilities. The average student debt has doubled since the mid-1990s.

And that burden often has an effect on the most fundamental choices graduates are making about their lives — decisions about home, family and career.

Take Isiah Sandlin, 32, and Hollie Sexton, 26, who are studying medicine at the University of Washington. Sandlin already has $275,000 in student loans; Sexton, $100,000. When the couple graduate in two years’ time, they expect their combined student loans will top half-a-million dollars.

Each new loan helps cover the payments on the previous ones. At least one of them will likely need to work in a high-paying specialty to make the whole thing fly. Sexton’s dream of volunteering abroad seems a long way off.

“I couldn’t quit now if I wanted to. No way,” Sexton says. “Once you are on the train, you’ve got to keep going.”

While Hunter and Sandlin have exceptionally large loans, more than two-thirds of all students now borrow money to finance their education, up from less than half in 1993. Among undergrads who borrow, the average finished school in 2004 with loans of $19,000, up from $9,000 a decade earlier, according to one analysis of federal data.

Debt is escalating the fastest in graduate schools.

At Seattle University, where 80 percent of undergrads now borrow, the average student graduates with $23,000 in debt. Because federal loan limits are rising this fall, Seattle U officials say this year’s freshmen can expect to graduate with debts averaging $27,000.

On a 10-year repayment schedule, at 6 percent interest, that will add $300 to a graduate’s monthly bills.

Educators and economists have argued for decades that higher education represents a great long-term investment, thanks to the higher wages graduates can command. Janet Cantelon, director of student financial services at Seattle University, points out that even $300 a month is manageable for most graduates — the equivalent of a car payment — and a good long-term investment.

Yet the payoff is simply not as good as it once was.

Workers with bachelor’s degrees do earn more — an average $51,000 a year, compared with $31,000 a year for high-school graduates, according to the U.S. Department of Labor. But the department also reports that college tuition now costs five times what it did in the early 1980s, and it is rising at more than twice the rate of inflation. Inflation-adjusted wages, meanwhile, have remained stagnant since 2002.

And experts say there are some worrying trends in the rising debt levels — particularly in the precipitous rise in private loans, at least until recent months. More and more of those loans are directly marketed to students, without any oversight or involvement from schools, and often at higher interest rates.

In 1997, the federal government financed almost all student loans, with private loans making up just 5 percent of the market, according to the College Board.

But with the government failing to keep pace with costs, the private sector last year wrote at least 22 percent of the loans. Put another way, the amount of money borrowed from private lenders rose tenfold to $17.1 billion over that decade. And those figures don’t take into account other ways students and their families are borrowing, such as tapping home equity or credit cards.

In recent months, the credit crisis has halted the rapid expansion in private lending, and experts say that may not be a bad thing. Some lenders have abruptly pulled out of community colleges and for-profit schools; others are demanding more documentation.

Just how the economic upheaval will play out remains to be seen. For now, at traditional four-year colleges, most students still are able to access large loans.

Driving up college costs in recent years is the fact that states are investing less in public universities, putting more of the burden on students, says Jacqueline King, an assistant vice president at the Washington, D.C.-based American Council on Education.

With its professors and tutors, administrators and groundskeepers, education is labor-intensive, King says. The cost of employing skilled professors has risen sharply. And universities can’t keep costs in check the way big business can, she added, by outsourcing or manufacturing overseas.

To be sure, student loans do help hundreds of thousands of students each year make it through college and improve their prospects in life. And there are signs that parents are coming to grips with the new financial reality of college: Assets in so-called 529 college-savings plans grew from $15 billion in 2001 to $122 billion in 2007, according to the College Board.

But for students graduating now, large loan repayments are adding a significant financial burden at a time when they also face rising health-care costs, expensive housing options and a difficult employment market — not to mention an economy on the brink.

When Tyson Hunter chose to attend Boston University, he never imagined he would end up borrowing so much money. His parents were willing to pay the equivalent of in-state tuition, about $6,000 or $7,000 a year. He also took a part-time job at a campus Starbucks, earning, with tips, $11 an hour.

BU tells students they will need at least $51,000 per year to cover tuition ($36,500) as well as lodging, food and personal expenses. Add it up, and it costs more than $200,000 for an undergraduate degree — not uncommon these days at a well-regarded private school.

Hunter was in his freshman year when his dad lost his job. His parents later divorced. Those events turned the family’s financial situation upside down, and they could no longer help out.

For a few months, Hunter left BU and tried a cheaper option — classes at Shoreline Community College and Seattle University. But, he said, he missed the intellectual stimulation and “East Coast competitiveness” of BU.

“I thought ‘Screw it. I’ll go back, and I’ll just take on debt,’ ” Hunter said. He doesn’t regret the move for a moment, he added.

“I felt like I was striving to better myself and to reach my greatest potential, and that BU facilitated that,” he said. “I wouldn’t have been nearly as happy if I went to a local school.”

Hunter did receive some extra aid due to his family’s changed circumstances, but it wasn’t nearly enough. Now working as an account manager in Bellevue, Hunter has deferred principal payments on his largest student loan for a year, reducing his monthly bills until April.

“All I can do is offer him a place to stay for free and help him out that much,” said mom, Nancy Hunter. “And if I win the lottery, I can pay off his loans.”

Tyson Hunter said he appreciates his mom giving him a place to live, but he misses his independence. He has sketched out a financial plan that should allow him to move out in February.

Hunter seems confident he will be able to repay his loans. But he has no room for missteps.

For some students, loans can change a career path. That’s the case with Josh Bates.

“Once upon a time, I wanted to be an engineer,” Bates said. “But I didn’t want to take on any more loans. I was so in debt.”

Bates, 27, of Bothell, studied mechanical engineering at Montana State University. He slacked off for a couple of years, he says, partying too much and enjoying the perks of student life. After five years at MSU, he had accumulated nearly $50,000 in student loans, another $8,000 in credit-card debt, and he still didn’t have a degree.

So Bates moved back in with his parents in Bothell and took a full-time job with a Seattle marketing firm. He has been finishing his degree by taking after-hours Central Washington University courses, offered at the Edmonds Community College campus. Because there is no mechanical-engineering program available, Bates has switched his major to business.

“If I had the time to go back to Montana State, I’d go back and finish,” Bates said.

Student loans also are playing into the career decisions of Isiah Sandlin and Hollie Sexton, the couple studying medicine at the UW.

Sandlin accrued a lot of his debt while finishing a four-year degree in naturopathic medicine at Kenmore’s Bastyr University, before realizing his true calling lay in traditional medicine.

He and Sexton, who has accumulated most of her loans during her two years at medical school, say the amount they owe is a big concern.

“I’d be lying to say it didn’t color my specialty,” said Sandlin, who is looking into emergency medicine or a surgical specialty. “Some of the specialties I’m considering are of interest to me, but they also pay particularly well on the whole physician spectrum.”

On Sexton’s 2008-09 financial-aid statement, the UW outlines the expected cost of medical school: $50,500, including tuition, housing and personal expenses. The university subtracts “total resources” — zero — and offers a package that includes $3,000 in grants and $47,500 in federal loans.

Sexton is taking the full amount. She doesn’t feel like she has any other option.

This entry was posted in RagBlog and tagged Banking, Capitalism, Education. Bookmark the permalink.

2 Responses to Indentured College Graduates: How the Capitalist System Locks in the Slaves