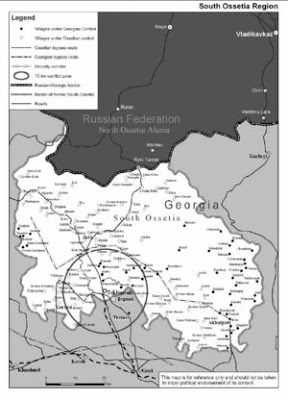 Considering the grave implications of the battle that has broken out over South Ossetia, it was puzzling to see the sparse coverage on Friday’s cable news and financial networks. On the other hand, maybe this is good news. The imperial position has not been prepped. Before waiting on next week’s lineup of Pentagon consultants dragged back from vacation, we the people have maybe 24 hours to make up our own minds.

My contribution toward a people-centered solution: concede independence to the breakaway republic of Tskhinval. Here’s why.

On Nov. 12, 2006, South Ossetians aligned with the breakaway republic of Tskhinval, re-elected their independent president, Eduard Kokoity. But this is only half the story.

As Irina Kelekhsayeva reports for the Institute for War and Peace Reporting (IWPR), on the same day that Kokoity was re-elected in Tskhinval, there was a parallel election among a cluster of ethnic Georgian villages in the region, resulting in the confirmation of Dmitry Sanakoyev as the “alternative president” of an “alternative administrative unit” created by Georgia’s central government. South Ossetia has two Presidents, but Kokoity usually gets called the “de facto” one (CRS No. 392 17-May-07).

Although Russia had agreed to withdraw its military bases from Georgia, reports continued to hint that weapons from Russia were continuing to flow into Tskhinval. Meanwhile, from the other side, Georgia got lots of help from the USA and achieved the highest growth rate of military spending in the world. Says the 2008 yearbook from the Stockholm International Peace Research Institute (SIPRI): “Georgia in particular had a very high level of military spending in comparison to the size of its economy.”

On both sides, the arms built up and up. On the ground, people of the region did their best to live under the tensions of dual Russian-Georgian peacekeeping forces, who periodically blocked and unblocked travel along key roads. Last week, in an effort to unfreeze the frozen conflict, the Georgian Army rolled into the region from the South. The Russian Federation countered with a swift and surprising attack from the North.

Already, voices in the USA, echoing the policy posted at the State Department web site, talk about a need to maintain the “integrity” of the border that keeps South Ossetia clearly within the domain of Georgia. This is the position to rethink.

Most ominous for peace lovers is the presence of the Caspian pipeline that runs near the Georgia capital of Tbilisi, just south of South Ossetia. This is the same pipeline that is now in flames in Turkey from a reported attack by the Kurdistan Workers’ Party (PKK), another “separatist” group that analysts will no doubt consider when evaluating any concession to the South Ossetia “separatists.”

On the Russian side, there are similar considerations of geopolitical posturing. Some analysts say an objective of the Russian incursion this week will be to strengthen the Russian influence over terms of conflict resolution. The Russian gambit may also work to keep Georgia out of NATO forever.

Which brings me to the tentative, people-centered solution: In consideration of the longstanding “de facto” independence of Tskhinval, the boundary of Georgia’s “integrity” should be rethought to exclude that portion of South Ossetia known as the breakaway republic. The “Georgian villages”, on the other hand, should be allowed to reunite.

No doubt, a certain kind of geopolitical logic will not shirk the prospect of drawing Russia into a protracted war with Georgia. As the Georgian arms buildup comes from USA aid and manufacturers, geopolitical ambitions will still be whetted by profit. But if we think about geopolitical peace that respects traditions of autonomy and self-definition, then the people of South Ossetia deserve a defensive retreat of the Georgian Army to concede the independence of the breakaway republic of Tskhinvali.

Peace for South Ossetia means relinquishing hardline claims that it falls within the “sovereign” borders of Georgia. If Georgia concedes quickly, then world opinion can next focus on the immediate withdrawal of Russian troops, whose stated purpose for invading Tskhinval will have vanished.

In the above, tentative suggestion, I have tried to apply a people-centered, rather than a bloc- or state-centered strategy of peace. This is a deliberate attempt to think outside of the Cold War box. In the event that people of the world are prepared to think and act with independence, we may find something in our future besides World War III.

• An Associated Press report attributes US interests in Georgia to the Caspian pipeline. However a quick check of a map seems to indicate that the pipeline runs well south of South Ossetia, a fact strangely missing from the AP report. “Georgia as a whole means quite a lot,” says a strategist to the AP. No doubt. But if the pipeline is going to draw our thoughts to the region, then what would be the point of prolonging the conflict over a small northern province of Georgia, when US oil interests lie further south?

• Michel Chossudovsky explored the impact of the Caspian pipeline during the bombing of Lebanon in 2006:

The Ceyhan-Tblisi-Baku (BTC) pipeline totally bypasses the territory of the Russian Federation. It transits through the former Soviet republics of Azerbaijan and Georgia, both of which have become US “protectorates”, firmly integrated into a military alliance with the US and NATO. Moreover, both Azerbaijan and Georgia have longstanding military cooperation agreements with Israel.

• The US State Department position: The United States supports the territorial integrity of Georgia and a peaceful resolution of the separatist conflict in South Ossetia. Note how the State Department’s own account of the conflict points to provocations against the Ossetians by the Georgia authorities:

The cessation of hostilities brought on by the Sochi Agreement held fast into 2004. At that point, Georgian President Eduard Shevardnadze had been replaced by Mikheil Saakashvili, who expressed a renewed interest in reintegrating Georgia’s separatist regions. In keeping with this policy, the Georgian Government placed a special emphasis on the regulation and monitoring of trade within and through South Ossetia, closing down a particularly large South Ossetian market which had been used for unregulated trade. South Ossetian forces retaliated by closing highways and detaining Georgian troops within South Ossetian borders. Tensions between the sides escalated, and exchanges of mortar fire in late July and August 2004 killed dozens.

• Recent trends in military expenditure (SIPRI): Military spending is rising rapidly in the South Caucasus — Armenia, Azerbaijan and Georgia — largely due to the region’s three ‘frozen’ conflicts and the involvement of external actors. The rises have been made possible by economic upswings largely based on oil and gas revenues.

• Ossetians.Com: In this labor of love by an Ossetian expatriate living in Canada, we can see how the local experience of Ossetians appears to be more aggravated by Georgian than Russian dominion.

• In any event, there is always a question of minority populations, whose rights should be respected. Here is a 2005 report:

Residents of villages in the Didi and Patara Liakhvi districts, point to continuing instances of suspected kidnapping and torture of Georgians, as well as an increasing number of complaints about discrimination, as indicators of what life under an autonomous South Ossetia would be like.

[Greg Moses is editor of the Texas Civil Rights Review and author of Revolution of Conscience: Martin Luther King, Jr. and the Philosophy of Nonviolence.]

5 Responses to Independence in South Ossetia or World War III?