MEDIA : The Press and the Atomic Bomb 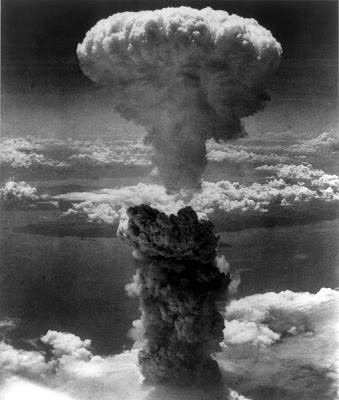 Mushroom cloud from the nuclear explosion over Nagasaki rising 60,000 feet into the air on the morning of Aug. 9, 2008.
63 Years Ago: Media Distortions Set Tone for Nuclear Age
By Greg Mitchell / August 6, 2008

At this time of year it is always important to look back at how the original “first-strike” was explained to the press, distorted, and then became part of the decades-long narrative of how, in this view, nuclear weapons can be used — and used again.

Sixty-three years after the atomic attacks on Hiroshima and Nagasaki, The Bomb is still very much with us. The U.S. retains over 5000 nuclear weapons — does this surprise you? — with better than 4000 said to be “operational.” There are plans to reduce this number, but only by 15%. The Russians still have many of their nukes but these remnants of the “superpower” era — and the lack of airtight security surrounding them — get little play today. All we seem to hear about are alleged or possible Iranian or North Korean or freelance terrorist nuclear devices.

The fact is, our “first use” policy — dating back to 1945 — remains in effect and past Gallup polls have shown that large numbers of Americans would endorse using The Bomb against our enemies if need be. So at this time of year it is always important to look back at how the original “first-strike” was explained to the press, distorted, and then became part of the decades-long narrative of how, in this view, nuclear weapons can be used — and used again.

The Truman announcement of the atomic bombing on Aug. 6, 1945, and the flood of material from the War Department, written by The New York Times’ William L. Laurence the following day, firmly established the nuclear narrative. It would not take long, however, for breaks in the official story to appear.

At first, journalists had to follow where the Pentagon led. Wartime censorship remained in effect, and there was no way any reporter could reach Hiroshima for a look around. One of the few early stories that did not come directly from the military was a wire service report filed by a journalist traveling with the president on the Atlantic, returning from Europe. Approved by military censors, it went beyond, but not far beyond, the measured tone of the president’s official statement. It depicted Truman, his voice “tense with excitement,” personally informing his shipmates about the atomic attack. “The experiment,” he announced, “has been an overwhelming success.”

The sailors were said to be “uproarious” over the news. “I guess I’ll get home sooner now,” was a typical response. Nowhere in the story, however, was there a strong sense of Truman’s reaction. Missing from this account was his exultant remark when the news of the bombing first reached the ship: “This is the greatest thing in history!”

On Aug. 7, military officials confirmed that Hiroshima had been devastated: at least 60% of the city wiped off the map. They offered no casualty estimates, emphasizing instead that the obliterated area housed major industrial targets. The Air Force provided the newspapers with an aerial photograph of Hiroshima. Significant targets were identified by name. For anyone paying close attention there was something troubling about this picture. Of the thirty targets, only four were specifically military in nature. “Industrial” sites consisted of three textile mills. (Indeed, a U.S. survey of the damage, not released to the press, found that residential areas bore the brunt of the bomb, with less than 10% of the city’s manufacturing, transportation, and storage facilities damaged.)

On Guam, weaponeer William S. Parsons and Enola Gay pilot Paul Tibbets calmly answered reporters’ questions, limiting their remarks to what they had observed after the bomb exploded. Asked how he felt about the people down below at the time of detonation, Parsons said that he experienced only relief that the bomb had worked and might be “worth so much in terms of shortening the war.”

Almost without exception newspaper editorials endorsed the use of the bomb against Japan. Many of them sounded the theme of revenge first raised in the Truman announcement. Most of them emphasized that using the bomb was merely the logical culmination of war. “However much we deplore the necessity,” The Washington Post observed, “a struggle to the death commits all combatants to inflicting a maximum amount of destruction on the enemy within the shortest span of time.” The Post added that it was “unreservedly glad that science put this new weapon at our disposal before the end of the war.”

Referring to American leaders, the Chicago Tribune commented: “Being merciless, they were merciful.” A drawing in the same newspaper pictured a dove of peace flying over Japan, an atomic bomb in its beak.

At the same time, however, the first non-official news reports began to break into print, including graphic accounts of casualties, a subject ignored in the War Department’s briefings.

Tokyo radio, according to a United Press report, called Hiroshima a city of the dead with corpses “too numerous to be counted … literally seared to death.” It was impossible to “distinguish between men and women.” Medical aid was hampered by the fact that all the hospitals in the city were in ashes. The Associated Press carried the first eyewitness account, attributed to a Japanese soldier who had crudely described the victims (over Tokyo radio) as “bloated and scorched — such an awesome sight — their legs and bodies stripped of clothes and burned with a huge blister. …”

Americans who came across these reports were thrust briefly into the reality of atomic warfare — if this information could be believed; The New York Times observed that the Japanese were “trying to establish a propaganda point that the bombings should be stopped.” The Hearst newspapers published a cartoon showing a hideous, apelike “Jap” rising out of the ruins of Hiroshima screaming at Americans, “They’re Not Human!”, with the caption, “Look who’s talking.”

But in quoting from Tokyo radio, newspapers did introduce their readers to a disturbing point of view: that the atomic bombing might not be an act of deliverance blessed by the Almighty but a “crime against God and man”; not a legitimate part of war but something “inhuman,” a cruel “atrocity,” and a violation of international law, specifically Article 22 of the Hague Convention which outlawed attacks on defenseless civilians. The Japanese also compared the bomb to the use of poison gas, a weapon generally considered taboo. It was this very analogy many American policy makers and scientists had feared as they contemplated using the bomb, which they knew would spread radiation.

Other condemnations appeared as the War Department’s grip on the story weakened slightly. The New York Herald-Tribune found “no satisfaction in the thought that an American air crew had produced what must without doubt be the greatest simultaneous slaughter in the whole history of mankind,” likening it to the “mass butcheries of the Nazis or of the ancients.”

A leading religious body in America, the Federal Council of Churches, urged that the U.S. drop no more atomic bombs on Japan, in a statement issued by two of its leaders, G. Bromley Oxnam and John Foster Dulles, later President Eisenhower’s chief adviser. America had won the race for the bomb but it “may yet reap the whirlwind,” Hanson Baldwin, military analyst for the New York Times, declared.

Interest in Hiroshima, however, receded as other events in the Pacific war, as well as speculation about a Japanese surrender, took center stage. On Aug. 9, the top two headlines on the front page of The New York Times announced the Soviets’ declaration of war against Japan (indeed, some historians would later write that it was this, not the atomic bombs, that primarily forced the Japanese surrender). Not until line three did this message appear: “ATOM BOMB LOOSED ON NAGASAKI.” The target of the second attack, a city of 270,000 people, was described, variously, as a naval base, an industrial center, or a vital port for military shipments and troop embarkation, anything but a largely residential city. The bomb, in fact, exploded over the largest Catholic community in the Far East.

That night, President Truman told a national radio audience that the Hiroshima bomb had been dropped on a “military base,”not a large city, although he knew this was not true. “That was because we wished in the first attack to avoid, in so far as possible, the killing of civilians,” he said. Yet 150,000 civilians had died or would soon perish from radiation disease.

[Greg Mitchell is co-author, with Robert Jay Lifton, of the book, “Hiroshima in America.”]

1 Response to MEDIA : The Press and the Atomic Bomb