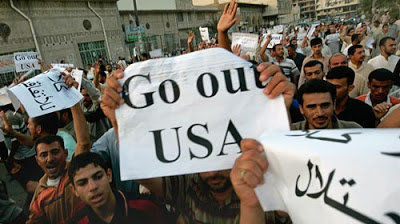 Shiite Muslims march in Najaf on Aug. 21 to denounce the presence of U.S. troops and talks with Washington. Photo: Qassem Zein / AFP/Getty Images
Agreement on U.S. withdrawal from Iraq said to be in peril as Maliki ousts negotiators
By Ned Parker / August 31, 2008

The Times is told that the prime minister has replaced the team with loyalists at the ‘make-or-break’ stage of talks. The two sides reportedly remain deadlocked on key issues.

BAGHDAD — At the “make-or-break” stage of talks with the U.S. on the withdrawal of American troops from Iraq, Prime Minister Nouri Maliki has swept aside his negotiating team and replaced it with three of his closest aides, a reshuffle that some Iraqi officials warn risks sabotaging the agreement.

The decision on the team negotiating the pact, which the Americans have described as the basis of a long-term strategic alliance between the United States and Iraq, remains so sensitive that it has not been announced. In disclosing the switch to the Los Angeles Times this weekend, a senior Iraqi official close to Maliki also suggested that the two sides remained deadlocked on key issues.

The shake-up comes just four months before the expiration of the United Nations mandate that authorizes the U.S. troop presence in Iraq. When Secretary of State Condoleezza Rice visited the country recently, expectations rose that an agreement was imminent. But Iraq and the United States remain far apart on the matter of immunity for U.S. forces in Iraqi courts, the official said.

“People gave the impression we were close when Rice was here, but it’s not over. We would have a serious problem if we took it to the parliament right now,” said the official, who spoke on condition of anonymity because he wasn’t authorized to discuss the issue.

The official insisted that if U.S. troops remained exempt from Iraqi rule of law, the pact would never get passed by the lawmakers.

The sides also are still negotiating a withdrawal date, the official said.

The latest version of the agreement, which was read to The Times by the Maliki confidant, says all U.S. forces will leave Iraq by the end of 2011, unless Iraq requests otherwise. It also says the Americans will withdraw from cities in June 2009, unless the Iraqis ask them to stay.

The new wording is a departure from the White House’s insistence on a conditions-based timeline for a pullout. Under the new language, Iraq, not the U.S. military, decides when the troops will leave. U.S. officials have gone back to Washington to consult on the language, the Maliki confidant said.

Some Iraqi lawmakers have reacted angrily to the dismissal of the original negotiating team.

“These are diversionary tactics to avoid a decision. It’s not a question of negotiating teams. It’s a matter of, do you want it or don’t you?” said an Iraqi familiar with the talks. “They are avoiding the issue. They don’t want a status of forces agreement. They don’t want a security agreement.”

Maliki’s confidant defended the shake-up, saying the prime minister needs those closest to him to lead the talks because they have the authority to make decisions that the original team did not possess.

Iraqi and Western officials monitoring the talks have said Maliki is afraid of accepting terms that could brand him as an American puppet. Iran, which is fiercely opposed to an agreement, has also exerted intense pressure.

Shiite Muslim lawmakers have also said some members in the prime minister’s Islamic Dawa Party believe that Iraq can survive without the Americans if the White House doesn’t meet Maliki’s demands.

In the reshuffle last week, Maliki dismissed the delegation headed by the Foreign Ministry and picked his national security advisor, Mowaffak Rubaie; his chief of staff, Tariq Najim; and political advisor Sadiq Rikabi to conduct the negotiations’ final stage, the Maliki confidant said.

“The talks have reached a critical point now. They need a political decision, not a technical one,” the official said. “The discussions have reached the make-or-break stage.”

Rikabi, Rubaie and Najim report directly to the prime minister; Deputy Foreign Minister Mohammed Haj Hamoud, who led the original negotiations, has been removed, the official said. Western diplomats previously have criticized the prime minister for governing through his inner circle and shutting out other factions.

“Hamoud had to deal with too many people and then comes to a meeting with the prime minister,” the official said. “It was a big process.”

Iraq’s politics are often turbulent, with the country’s Sunni, Shiite and Kurdish politicians regularly plotting against one another. Until he took on the Mahdi Army, a Shiite militia, in the southern city of Basra in March, Maliki was considered politically weak and had been accused by Sunni Arab and Kurdish officials of hoarding power and executing a sectarian agenda.

U.S. Embassy spokeswoman Susan Ziadeh declined to comment on the shake-up, saying the Iraqi government had the right to choose the negotiators that it wanted.

A State Department spokesman in Washington told reporters last week that the United States hoped to finish an agreement by December. The sides had aimed to complete it by July. The Iraqi official close to Maliki said Iraq could always request an extension from the U.N. if they did not reach a deal before the end of the year.

Some Western and Iraqi officials blame the Americans for sending a team in the spring that demanded more than 50 long-term bases, the ability to launch operations without permission from the Iraqi government and immunity for security contractors and U.S. troops. Their opening stance played into the hands of Shiite lawmakers in Maliki’s coalition, who want the Americans to leave, officials said.

Mithal Alusi, an independent Sunni lawmaker who has advised Maliki in the past, accused the prime minister of trying to wreck the talks.