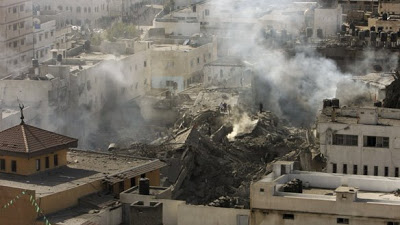 Gaza’s central security headquarters and prison, known as the Seraya, after it was hit in an Israeli missile strike in Gaza City on Sunday. Photo by Adel Hana / AP.

‘Even if you set aside the magnitude of Israel’s violations of the Geneva conventions and the long terrible history of its methodical collective punishment of 1.5 million Palestinians in Gaza, consider the vastly disproportionate carnage in the conflict.’

Israelis and Arabs “feel that only force can assure justice,” I. F. Stone noted soon after the Six-Day War in 1967. And he wrote, “A certain moral imbecility marks all ethnocentric movements. The Others are always either less than human, and thus their interests may be ignored, or more than human and therefore so dangerous that it is right to destroy them.”

The closing days of 2008 have heightened the Israeli government’s stature as a mighty practitioner of the moral imbecility that Stone described.

Israel’s airstrikes “have killed at least 270 people so far, injured more than 1,000, many of them seriously, and many remain buried under the rubble so the death toll will likely rise,” Phyllis Bennis, of the Institute for Policy Studies, pointed out on Sunday, two days into Israel’s attack. “This catastrophic impact was known and inevitable, and far outweighs any claim of self-defense or protection of Israeli civilians.” She mentioned “the one Israeli killed by a Palestinian rocket attack on Saturday after the Israeli assault began was the first such casualty in more than a year.”

Even if you set aside the magnitude of Israel’s violations of the Geneva conventions and the long terrible history of its methodical collective punishment of 1.5 million Palestinians in Gaza, consider the vastly disproportionate carnage in the conflict.

“An eye for an eye makes the whole world blind,” Gandhi said.

What about a hundred eyes for an eye?

It makes some of the world ill with rage. And it turns much of the United States numb with silence. Routinely, the politicians and pundits of Washington can’t summon minimal decency in themselves or each other on the subject of Israel and Palestinians.

While officialdom inside the Beltway seems frozen in fear of risking “anti-Semitism” charges by actually standing up for the human rights of Palestinian people, some progress at the grassroots level has been noticeable. It includes the growth of groups such as Jewish Voice for Peace, Tikkun and The Shalom Center, where activists have worked to refute the false claims that American Jews are united behind Israeli policies.

At the epicenters of the conflict — where the belief that “only force can assure justice” seems to be even stronger than when I. F. Stone wrote about it 41 years ago — the conclusion has been drawn and redrawn so many times that deadly repetition has become paralytic. While some Palestinian “militants” have terrorized and murdered, the Israeli government has terrorized and murdered on a much bigger scale, using a vast arsenal largely financed by US taxpayers.

From afar, in the United States, it’s too easy to shake our heads at the lethal loss of moral vision. Don’t they know that “an eye for an eye makes the whole world blind”? But the cycle of violence is extremely asymmetrical – while the US government provides Israel with billions of dollars and invaluable “diplomatic” support.

What’s going on in Gaza right now is not just an eye for an eye. It’s a hundred eyes for an eye. And the current slaughter is not only an ongoing Israeli war crime. It has an accomplice named Uncle Sam.

[Norman Solomon is the author of “War Made Easy: How Presidents and Pundits Keep Spinning Us to Death.” To watch video of his recent appearance on C-SPAN’s “Washington Journal,” click here.]Source / truthout 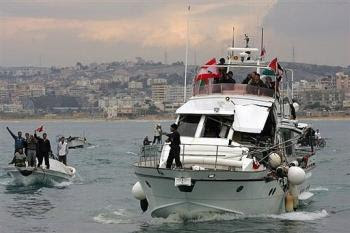 TYRE, Lebanon — An Israeli naval vessel collided on Tuesday with a boat carrying activists and medical supplies that was trying to break the blockade of Gaza, forcing it to divert to a port in Lebanon.

Passengers on board the 20-metre (66-foot) Dignity said the Israeli patrol boat rammed their vessel causing extensive damage, but Israel insisted the two boats collided as the Israeli navy was trying to contact its captain.

Television pictures of the boat entering the southern Lebanese port city of Tyre showed a large gash in the bow of the boat on the port side, with pieces of wood and broken glass covering the deck.

“The glass shattered over top us. I was thrown across the room. The tables and benches broke around me,” Bowyer told AFP.

“We were all pretty sure we were being shot at and that we’d sink,” she added saying they quickly grabbed for their life jackets and “prepared for the worst.”

Another activist on the Gaza-bound boat, former American congresswoman Cynthia McKinney, said the Israeli actions had been deliberate.

“Our mission of solidarity and humanitarian relief was deterred by the Israelis purposefully to keep us from delivering the medical supplies to Gaza,” McKinney told AFP.

She described the experience as “absolutely harrowing, but pales in comparison to what the people in Gaza are experiencing right now.”

At least 363 Palestinians — including 39 children — have been killed and 1,720 wounded since an Israeli air offensive began on Saturday, Gaza medics say.

“I wouldn’t call it accosting. I would call it ramming. Let’s call it as it is. Our boat was rammed three times, twice in the front and once on the side,” McKinney told CNN.

No one was injured in the collision between the patrol boat and Dignity — operated by the Free Gaza Movement — which was trying to take three tonnes of medical supplies into Gaza.

Israeli foreign ministry spokesman Yigal Palmor told AFP that the naval vessel tried to contact the aid boat by radio for identification and to inform it that it could not enter Gaza.

“After the boat did not answer the radio, it sharply veered and the two vessels collided, causing only light damage,” Palmor said.

However, the boat’s captain, Briton Denis Healey, 54, said on arriving in Tyre that the Israeli navy had made “no contact” with the Dignity.

“The boat initially took in a lot of water,” added Healey who said he was “a bit frazzled.”

The Israeli spokesman accused the international activists of “seeking provocation more than ever.”

But McKinney insisted: “We are on a humanitarian mission… All we want to do is deliver medical supplies… This is the first time that I am aware of that a vessel was attacked for no reason by Israelis.”

The Free Gaza Movement, which has run the blockade six times since August to take humanitarian supplies into Gaza, said the vessel could still sail after the ramming.

Paul Larudee, one of the group’s founders, said the Dignity had been “surrounded” in international waters about 70 kilometres (45 miles) off the Israeli coast and 135 kilometres from Gaza.

“It was surrounded by 11 Israeli naval vessels,” he said.

“They ordered the boat to stop, and we didn’t. They began firing over our boat and into the waters next to the boat. When the boat wouldn’t turn back, one of the naval vessels rammed the boat, but not enough to disable the boat.”

The Dignity was given a rousing welcome when it arrived in Tyre, with hundreds of residents clambering aboard fishing boats to greet the activists with cheers and a colourful display of Lebanese flags as well as flags of the Shiite Hezbollah and Amal movements.

Lebanese President Michel Sleiman had earlier said in a statement that the boat was welcome to dock in any Lebanese port.