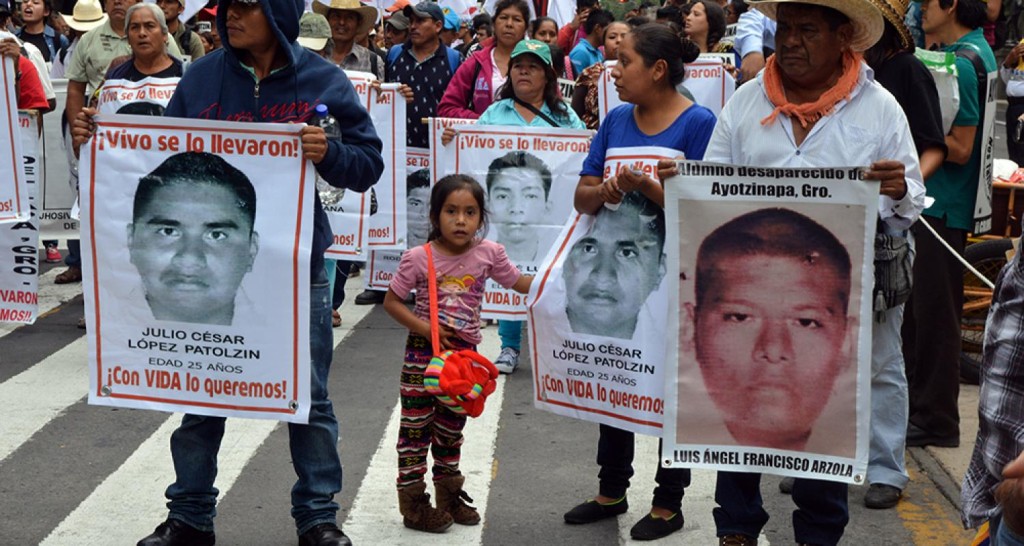 MEXICO CITY —  Nine months after the forced disappearance of 43 education students, a three-mile march culminated in the “plantón” known as “43 x 43 por Ayotzinapa,” a three-day occupation of the plaza of Bellas Artes, the principal museum and cultural center in Mexico, which is adjacent to the Alameda Central.

This June 26-28 action began the day after the opening of a major exhibition of works by Michaelangelo and DaVinci. The cultural and political events took place before a captive audience of 10,000 gallery visitors on Saturday and many more on Sunday.

They were eager to participate in the revival of the movement after months of repression.

Everyone was in good spirits (though still angry at the government) in spite of a bit of rain at the beginning of the occupation on Friday and the end on Sunday. They were eager to participate in the revival of the movement after months of severe government repression and some inevitable attrition had weakened the protests.

(The offices of CENCOS, a movement communication organization linked to the Vatican II-era Catholic Church, were raided by unidentified infiltrators just two days before Friday’s march. This is the least violent of the intimidation tactics the government and its allies have engaged in.)

Why was the weekend action successful?

An hour for each disappeared student turned out to be a good amount of time to sustain this marathon protest. Imagine an occupation of a strategic target — a government building, an important intersection, a place like the Mall of America in Bloomington, Minnesota — lasting an hour for each black person murdered by police in the U.S. since Ferguson.

The disappearance of the students is one of many atrocities perpetrated by the government.

It’s important to consider that the massacre and disappearance of the students of Ayotzinapa is one of many massacres perpetrated by the government since last summer:

What is the relation between this avalanche of atrocities, most planned and perpetrated by the Mexican government, and the economic and educational “reforms” it is implementing?

As Naomi Klein stated in the introduction to her classic study The Shock Doctrine: The Rise of Disaster Capitalism:

Mike Battles puts it best: “For us, the fear and disorder offered real promise.” The thirty-four-year-old ex-CIA operative was talking about how the chaos in postinvasion Iraq had helped his unknown and inexperienced private security firm, Custer Battles, to shake roughly $100 million in contracts out of the federal government. His words could serve just as well as the slogan for contemporary capitalism — fear and disorder are the catalysts for each new leap forward.