The report documents local, state, and federal participation in the many hours of violence against the students. 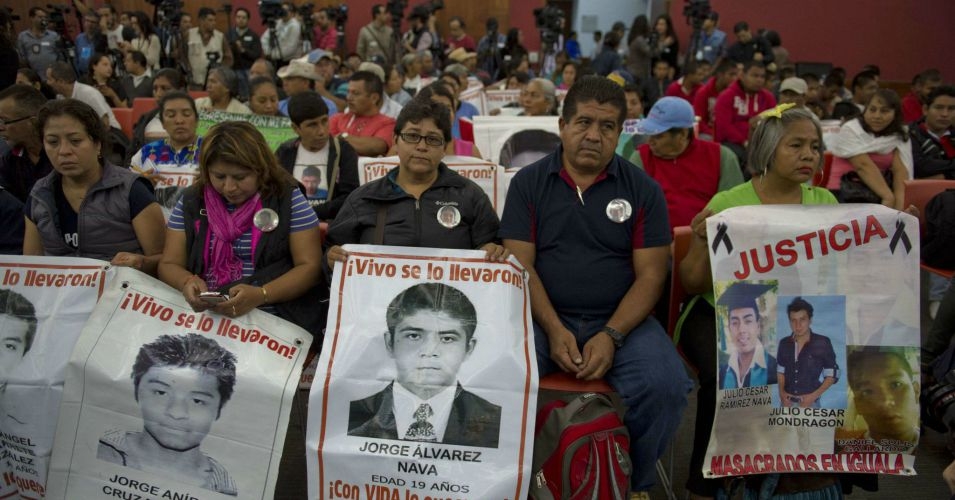 MEXICO CITY — The long-awaited report of the Grupo Interdisciplinario de Estudios Independientes, formed under the auspices of the Inter-American Commission on Human Rights, was released on Sunday, September 6, almost a year after the atrocities of September 26 and 27, 2014.

It belies almost all of the assertions of the Mexican government, including the theory that the students were burned in a landfill in the city of Cocula, adjacent to Iguala, after local police turned them over to drug gang members. The report documents local, state, and federal participation in the many hours of violence against the students.

The Interdisciplinary Group includes Francisco Cox Vial, a Chilean prosecutor who worked to extradite Augusto Pinochet from England; Claudia Paz y Paz, a Guatemalan who worked on the case against ex-president Efraín Ríos Montt; various other Latin American and Spanish experts, and, as expert witness, José Torero, a forensicist now based in Austrailia who, though he is not the first to debunk the burning theory, has had more impact than others and thus has attracted attacks from government-linked mass media like the newspaper Milenio and various radio and television news programs.

These attacks — questioning the little time that Torero spent at the site compared with time spent writing and in laboratory work — provoked him to demand in interviews that media stop “bombarding” the airwaves with attacks and speculation.

The report laments the refusal of the military to permit access to the base of the 27th Infantry Batallion (where survivors believe the students were taken) or interviews of personnel. This has caused critics like the writers and editors of the magazine Proceso to allege that the military has emerged, not only as part of the increasingly powerful Mexican police state, but as a power in itself.

In this sense, it’s interesting to note that in Guatemala, where military president Otto Pérez was just ousted, one of the protesters’ demands was, “No more generals” (as presidents). In Mexico, on the other hand, when, after protesters began to force their way into the base (see “The turbulence in Mexico continues,” The Rag Blog, January 20, 2015), the federal government announced that it would concede the right of students to visit and inspect the base, but media and chambers of commerce launched a frightening defense of military sovereignty, claiming that the armed forces are the essence of the state.

(True, of course, but as June Jordan famously asked in another context: “Who in the hell set things up this way?”)

The polling firm Parametría has released a series of polls about the credibility of President Enrique Peña Nieto and other pillars of the government regarding what is known in Mexico as el caso Ayotzinapa. (Ayotzinapa is the name of the community where the education school is located.)

In August, 64% of those polled did not believe the government’s version of the events.

Polling conducted in October, February, and August (before this report, which undoubtedly will exacerbate the president’s disapproval ratings) show that, in response to the question, “Do you believe the government’s version of the events?”, 54% said no in October. In February, 68% said no, and in August, 64%. To the question, “Do you approve of the government’s having closed the case?”, 64% said no in February and 83% said no in August. (This question was not asked in October.)

Given the overwhelming lack of confidence in the government in this case, why has outrage not been more bluntly expressed? Part of the reason is the extreme repression meted out against protesters in November and December and part of it is the traditional lull in critical, creative, and educational activity that occurs in Mexico during the extremely long Christmas season (December 12 to February 2), and a sense of shock, mourning, and numbing also plays a part. (I spoke with a musician with a reputation as an activist who invented a pretext to cancel a concert with the parents because the idea of facing them was too sad, too frightening.)

This shock doctine-style repression has been accompanied by the distraction of elections and other sports and entertainment spectacles and by the giving away (really) by the federal government of about 12 million high-definition television screens to protect citizens from what some apparently fear most: the digital blackout. When the government says social programs won’t be affected by budget cuts, this is the kind of programs it has in mind.

Protests have revived since the June 26 occupation at the Bellas Artes museum.

Protests have revived since the June 26 occupation of the plaza in front of the Bellas Artes museum in Mexico City, and the relatives of the 43 are on an intensive tour of college campuses in the city now to prepare protests for the upcoming anniversary, which may include a hunger strike by parents, school strikes, work stoppages, an attempt to speak with the pope in Philadelphia, or stronger actions that no one will announce in advance.

This diversity of proposals from the relatives and from the rest of the Ayotzinapa community is a reflection of their backgrounds: a few of the family members are teachers or had previous experience in activism; many are strongly Catholic and had never traveled far from where they live until the atrocities were committed. Most are subsistence farmers with little formal education. Most speak an indigenous language; some speak very little Spanish.

The reaction of Peña Nieto himself to the report was slicker, less openly hostile, than that of the media who operate on his behalf. He expressed willingness to meet with the families of the victims and with the experts themselves, most of whom had planned to leave Mexico on Thursday, September 10, and, through spokespersons, a willingness to extend the time allotted for the group of experts to work. (Why not? This dissipates the impact.)

He expressed outrage that such violence had occurred and pledged to get to the bottom of it, much like a father who announces that he’s discovered that there’s macho violence in this family and we’re going to find out who’s responsible.