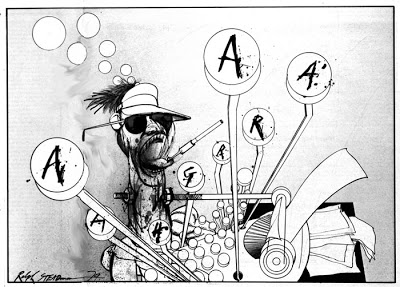 At times he could he cynical and depressed, but he also had clarity of vision and a commitment to tell the truth.

“The Kentucky Derby is Decadent and Depraved.” That is the title of an article by Hunter S. Thompson that appeared in Scanlan’s Monthly in June 1970, almost forty years ago.

The article marked the start of what came to be called “gonzo journalism,” and that reached a crescendo in two powerful books, Fear and Loathing in Las Vegas and Fear and Loathing on the Campaign Trail ‘72. The author, Hunter S. Thompson, was a fearless reporter who loathed the rich and the powerful, and took deadly aim at them in nearly everything that he wrote. Sadly, he committed suicide nearly five years ago on February 20, 2005.

In many ways American journalism has not been the same since his death. Though there are some exceptions, American journalism has become in large part the lapdog for the rich and the powerful. It is fawning, subservient, docile, and toothless. It is the decadent mass media of a decadent empire that stokes the egos of the wealth, and provides distractions from the realities of war, exploitation, poverty and disease. Were he alive today, Hunter S. Thompson would be writing articles entitled “The U. S. Is Decadent and Depraved.”

Thompson saw through the phoniness, the lies, and the deceit of American politicians, and lashed out at them, especially at Richard Milhous Nixon. When Nixon died in 1994, Thompson wrote a piece entitled “He Was a Crook” in which he said, “I beat him like a mad dog with mange every time I got a chance, and I am proud of it. He was scum.”

Thompson spoke and wrote for the disenfranchised, the dispossessed, the poor, the homeless and the persecuted. At times he could he cynical and depressed, but he also had clarity of vision and a commitment to tell the truth. It is true that he was not an objective journalist, that he wasn’t always fair and accurate. It is true, too, that he fictionalized, and that he made himself an essential part of the stories that he wrote about. That was gonzo and that was a part of the greatness and the genius of gonzo.

But gonzo was far more than just fictionalizing and making the author a principal player in the story. Gonzo meant lashing out at the American ruling class that is served by newspapers and magazines such as The New York Times and Vanity Fair with their nauseating adulation of the elite. Gonzo was a karate chop to the heart of the newspaper establishment that lied year after year about war, and the military and economic invasions of countries.

Thompson inspired a generation of reporters. Some of them are still around, still writing, and still fighting the good fight with blogs and books. Thompson’s in-you-face style of reporting was very popular and contagious. Readers loved it because it was real, and because it was alive and genuine. Editors went with it for a time. But that time is past. American journalism is back to its old form: covering up, concealing the bodies, and telling lies.

Professors of journalism say that gonzo can’t be taught. Maybe they’re right. Maybe gonzo is something that a writer has to find for himself or herself in much the same way that Hunter S. Thompson found it for himself. But let’s pray and hope that a new generation comes along that finds inspiration in Hunter S. Thompson’s fearlessness, and his loathing for the likes of politicians such as Nixon, Reagan and the Bushes.

In one of his stories published soon after the Democratic National Convention in Chicago in 1968, he describes himself in the street along with the protesters. Just a few feet away were armed National Guardsmen, city policemen, and the national news media. One of the protesters offered Thompson a joint. He looked at it, looked at the soldiers, police and media and then he took the joint and inhaled. “It seemed at the time like a thing that had to be done,” he wrote. “I knew which side I was on, and to refuse that joint would have been — in my own mind — a fatal equivocation.”

Thompson always knew that there are sides. He always knew, too, what side he was on: the side without the power and the money; the side that had nothing to lose and everything to win. He gave it all he could for as long as he could, and American journalism and American reporting was better because of him.

Some of his former friends and associates are hard on him today. He could not stop drinking, they say. He couldn’t “clean up his act.” But that inability to “clean up his act” was his saving grace. It meant that he never did go to the Kentucky Derby to celebrate with the rich and decadent. He never went to any of the spectacles of the rich and decadent to celebrate with them, but to record and describe their depravity.