Jonah Raskin :
Vietnam postscript: Activists remember the cause that shook an empire

For baby boomers who watched the Vietnam War on the nightly news, the war has never really ended. 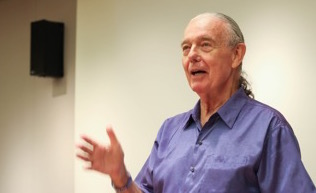 BERKELEY — Remember the War in Vietnam? Indeed, how could anyone who lived through that era forget napalm, tiger cages, and the Ho Chi Minh Trail? How could anyone forget the rag-tail army of pacifists, GIs, hippies, self-styled revolutionaries, Catholics, Buddhists, rock bands, and just plain crazies who took on the Pentagon, the White House, and the “War Machine”?

For baby boomers and their parents who watched the Vietnam War on the nightly news year after year, the war has never really ended. Images of burning villages, napalmed children, and B-52s dropping bombs were seared into the consciousness of a nation. They’re still there, though the U.S. has gone to war in Afghanistan, Iraq and elsewhere in the 21st century and new images of carnage, death, and destruction have spewed from the media.

When the Vietnam War ended in 1975, veterans of the anti-war movement fanned out in a dozen or more different directions that led to the Democratic Party, trade unions, environmental groups, corporate America, ashrams, and more. Four decades on, those veterans have one thing in common and that one thing is Vietnam and its legacy.

Vietnam still rankles, haunts, and disturbs. Certainly, the Vietnamese have not forgotten what they call the “American War.” They can’t forget it if only because Vietnamese babies are still born deformed because of chemicals such as Agent Orange that were sprayed over forests, lakes, rivers, and agricultural fields. Agent Orange also harmed American soldiers.

On a brisk afternoon in October, at the Berkeley Public Library, three anti-war activists — Rennie Davis, Frank Joyce, and Judy Gumbo — swapped stories about their glory days in the movement and lamented their inability to rise above sects and squabbles in the “long Sixties,” as it has been dubbed, and that began about 1963 and that lasted until 1975. They all agreed that there had to be a better way to resolve conflicts among friends and allies. 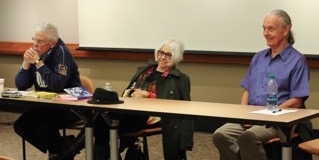 It was a rare public appearance for Davis, one of the Chicago Eight defendants on trial for conspiracy and rioting in the streets during the 1968 Democratic National Convention. Along with Tom Hayden and Dave Dellinger, Davis played a key role as an architect of anti-war protests all through the 1960s and early 1970s.

Like Gumbo, Joyce, and many others, including Jane Fonda and Staughton Lynd, he traveled to Vietnam and met with representatives of the North Vietnamese government. For nearly a decade, Davis and others, including Tom Hayden, practiced a kind of grassroots diplomacy that helped to bring negotiators from Hanoi and Washington, D.C., to the peace talks in Paris where they signed accords that brought an end to the war.

Davis lived and breathed Vietnam. Like others in the anti-war movement, he seems to have been undone by the war and by the years spent combating it. How else to explain that in 1973, he “saw the light,” as he described it, and became a follower of the Guru Maharaj Ji, then a 13-year-old Indian who came to the United States and established the Divine Light Mission and, in 1973, attempted to usher in “1000 years of peace for mankind” at Houston’s Astrodome.

Davis joined the cult and for years disappeared from public view, while his co-defendants from the Chicago Eight followed their own separate trajectories.

Tom Hayden ran for public office, became a California state senator, and spent years in Sacramento. Abbie Hoffman went underground after an arrest for cocaine and later committed suicide. Jerry Rubin went to Wall Street and died in a traffic accident in Los Angeles. Judy Gumbo became a fundraiser for Planned Parenthood, and, after years of living in Portland, Oregon, settled in Berkeley where she had written for The Tribe and The Barb, and where she recently helped celebrate the Barb‘s 50th anniversary reunion.

Davis carved out his own singular path, no less unique than his fellow co-conspirators. “Futurist” is the word that he usually uses today to describe himself. He’s just putting the finishing touches to a three-volume work he calls Generations Arise: Declaration of a New Humanity which seems to echo both his experiences with the anti-war movement and with the Guru Maharaji Ji.

“God is in you. You can experience the Knowledge of God, you can enjoy it,” the Maharaji Ji told his followers. Davis has translated some of his words into American idioms. “Be the change, that’s what it’s all about,” he said at the Berkeley Public Library, with Frank Joyce and Judy Gumbo at his side, and while neither echoed his words, neither ridiculed them.

A New Age was dawning, Davis told
the audience.

A New Age was dawning, Davis told an audience composed of veterans of the anti-war movement and a group of 20 or so Vietnamese-Americans, all of them women and all of them first-year undergraduates at the University of California at Berkeley. They were enrolled in an Asian-American studies class and they knew very little about the anti-war movement of the Sixties. When they were informed that millions of Americans had protested the war in Vietnam, they were impressed. Davis seemed to speak directly to them, especially when he explained that he met with refugees from Vietnam who had fled from communism and who settled in Orange County, California.

Wearing a purple shirt, his white hair drawn behind his head in a ponytail, Davis stood at the podium, looked straight at the audience and spoke without notes. 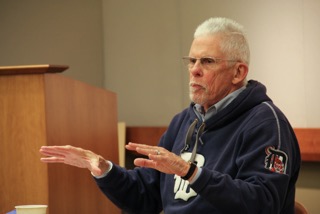 “My name is Rennie Davis,” he began, as though everyone would know who he was and that he need not say more. He paused for a moment and went on: “At the beginning of the 1960s, millions of young people were about to come together to change the world, though they didn’t know it. We’re about to do it again.” He added ominously, “We’re headed for a perfect storm, politically, environmentally, economically. Events like the drought will drive citizens from their regular lives. They will leave society and transform everything.”

In the question-and-answer period that followed the formal presentations, Davis explained that when he traveled in Vietnam he was treated like a hero. “I’m a democrat with a small d,” he added, lest anyone mistake him for a communist. “This is an opportune time to work with the Vietnamese because the White House wants to wean Hanoi from China and to persuade the government to become our ally.”

Frank Joyce and Judy Gumbo were less messianic, though no less passionate. Joyce wore a Detroit Tigers sweatshirt. “I’m from Motor City,” he told the audience. “We know about paradigm shifts.” His Detroit was the city of autoworkers, trade unions, and the cause of the working class. For 12 years, he served as the director of public relations for the United Auto Workers (UAW).

At the Berkeley library, he wore his blue-collar roots as clearly as Davis wore his patrician origins. Born in Virginia and a college student at Oberlin, Davis’s father worked in President Truman’s administration as chief of staff for the Council of Economic Advisers. Judy Gumbo, who was born in Canada to Jewish parents, defined herself as a “pot-smoking tie-dyed person.” She was probably the most self-critical of the three speakers. “I have lived a life of privilege,” she observed. In Vietnam in 1970, she said that she felt like “a fraud.” She sounded genuinely sad.

Of the anti-war movement, Frank Joyce explained, “We were naïve. We didn’t learn the lessons of McCarthyism.”

Joyce argued that “the miracle of the anti-war movement” gave birth to the anti-draft movement, and not vise versa. It was an important point that he wanted to get across and he repeated it several times.

Pro-war forces had demonized the rank-and-file of the anti-war movement.

Pro-war forces had demonized the rank-and-file members of the anti-war movement as hippies and draft dodgers, Joyce noted. They were for the most part neither. “I love Vietnam and I love to romanticize it,” he added. “Making peace is a big adventure. I think that we can do it again and defeat the military machine.”

He also added sobering thoughts. “There isn’t a single major radical political organization from the 1960s that exists today,” he said. “There’s no SDS, no SNCC, no Black Panthers.” No one in the room had anything to say to contradict him. There was no boasting, no claim to be the greatest generation, as well as the fathers and mothers of everything good, from environmentalism and organic farming to Buddhist meditation. Humility seemed to be the dominant tone of the afternoon. 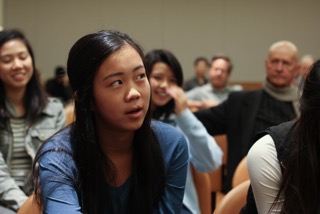 Judy Gumbo listened attentively to Joyce and Davis. When it was her turn to speak she described her visit to Vietnam in 1970 and again in 2013 when she observed what she called a “developing socialist-orientated market economy.” Wearing hippie garb and a jacket she had purchased on her most recent trip to Vietnam she said, “We fought for independence for Vietnam and if the Vietnamese want to choose socialism that’s up to them.”

She looked out at the audience and raised her voice a tad. “The message that we brought back from the Vietnamese on our recent trip was ‘thank you for helping to halt the war.’”

Then, there were questions from the floor and comments that were critical of the anti-war movement, especially the turn to bombings by the Weather Underground and the tendency to idealize the Vietnamese as heroic guerrilla warriors. Davis, Joyce, and Gumbo moved to a table at the back of the room and autographed copies of The People Make the Peace, a 267-paperback book to which they have contributed hefty essays about the movement to end the war in Vietnam and about Vietnam today.

Gumbo looked in the eyes of a Berkeley undergraduate. “A Vietnamese man told me something I really remember,” she said. “’Go slow, so you don’t fall down.’” It seemed like good advice for the anti-war veterans as well as the college students.

1 Response to Jonah Raskin :
Vietnam postscript: Activists remember the cause that shook an empire