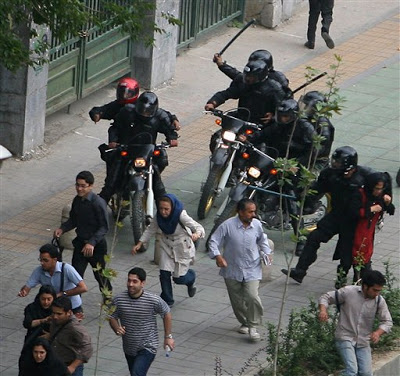 We’ve much more likely been had by a hard line constituency of at most 20% of the country, who claim to be the only true heirs of the Iranian revolution, and who control which ballots see the light of day.

Some comentators have suggested that the reason Western reporters were shocked when Ahmadinejad won was that they are based in opulent North Tehran, whereas the farmers and workers of Iran, the majority, are enthusiastic for Ahmadinejad. That is, we fell victim once again to upper middle class reporting and expectations in a working class country of the global south.

While such dynamics may have existed, this analysis is flawed in the case of Iran because it pays too much attention to class and material factors and not enough to Iranian culture wars. We have already seen, in 1997 and 2001, that Iranian women and youth swung behind an obscure former minister of culture named Mohammad Khatami and his 2nd of Khordad movement, capturing not only the presidency but also, in 2000, parliament.

Khatami received 70 percent of the vote in 1997. He then got 78% of the vote in 2001, despite a crowded field. In 2000, his reform movement captured 65% of the seats in parliament. He is a nice man, but you couldn’t exactly categorize him as a union man or a special hit with farmers.

The evidence is that in the past little over a decade, Iran’s voters had become especially interested in expanding personal liberties, in expanding women’s rights, and in a wider field of legitimate expression for culture (not just high culture but even just things like Iranian rock music). The extreme puritanism of the hardliners grated on people.

The problem for the reformers of the late 1990s and early 2000s was that they did not actually control much, despite holding elected office. Important government policy and regulation was in the hands of the unelected, clerical side of the government. The hard line clerics just shut down reformist newspapers, struck down reformist legislation, and blocked social and economic reform. The Bush administration was determined to hang Khatami out to dry, ensuring that the reformers could never bring home any tangible success in foreign policy or foreign investment. Thus, in the 2004 parliamentary elections, literally thousands of reformers were simply struck off the ballot and not allowed to run. This application of a hard line litmus test in deciding who could run for office produced a hard line parliament, naturally enough.

But in 2000, it was clear that the hard liners only had about 20% of the electorate on their side.

By 2005, the hard liners had rolled back all the reforms and the reform camp was sullen and defeated. They did not come out in large numbers for the reformist candidate, Karoubi, who only got 17 percent of the vote. They nevertheless were able to force a run-off between hard line populist Mahmoud Ahmadinejad and former president Akbar Hashemi Rafsanjani, a pragmatic conservative billionaire. Ahmadinejad won.

But Ahmadinejad’s 2005 victory was made possible by the widespread boycott of the vote or just disillusionment in the reformist camp, meaning that fewer youth and women bothered to come out.

No, this is not a north Tehran/ south Tehran issue. Khatami won by big margins despite being favored by north Tehran.

So observers who want to lay a guilt trip on us about falling for Mousavi’s smooth upper middle class schtick are simply ignoring the last 12 years of Iranian history. It was about culture wars, not class. It is simply not true that the typical Iranian voter votes conservative and religious when he or she gets the chance. In fact, Mousavi is substantially more conservative than the typical winning politician in 2000. Given the enormous turnout of some 80 percent, and given the growth of Iran’s urban sector, the spread of literacy, and the obvious yearning for ways around the puritanism of the hard liners, Mousavi should have won in the ongoing culture war.

And just because Ahmadinejad poses as a champion of the little people does not mean that his policies are actually good for workers or farmers or for working class women (they are not, and many people in that social class know that they are not).

So let that be an end to the guilt trip. The Second of Khordad Movement was a winning coalition for the better part of a decade. Its supporters are 8 years older than the last time they won, but it was a young movement. Did they all do a 180 and defect from Khatami to Ahmadinejad? Unlikely. The Iranian women who voted in droves for Khatami haven’t gone anywhere, and they did not very likely much care for Ahmadinejad’s stances on women’s issues:

‘In a BBC News interview, Mahbube Abbasqolizade, a member of the Iranian Women’s Centre NGO, said, “Mr. Ahmadinejad’s policies are that women should return to their homes and that their priority should be the family.”

Mir Hosain Mousavi was a plausible candidate for the reformists. They were electing people like him with 70 and 80 percent margins just a few years ago. We have not been had by the business families of north Tehran. We’ve much more likely been had by a hard line constituency of at most 20% of the country, who claim to be the only true heirs of the Iranian revolution, and who control which ballots see the light of day.

Yes, the president of Iran’s own election monitoring commission has declared the result invalid and called for a do-over. That is huge news: when a regime’s own electoral monitors beak ranks, what chance does the regime have of persuading anyone in the world or Iran that it has democratic legitimacy? — Andrew Sullivan / The Daily Dish

There were outbreaks of violence around Tehran’s university on Sunday. Photo from AFP.

TEHRAN — As demonstrations against the Iranian election result continue, the situation in Tehran is becoming unpredictable and potentially explosive.

Throughout Sunday, crowds gathered in a number of areas. Often they were not organised protests.

In traffic jams, car drivers hooted their horns in opposition to the government. Crowds stood on the pavement, chanting and showing v-signs.

In some places, the police were out in force. Some of them were in full riot gear. Others charged into action on the back of motorbikes.

They seem to have been given clear instructions not to open fire. Though occasional gunfire has been heard, mostly police have been wielding truncheons and batons in often brutal fashion.

It is difficult to get any reliable picture of the scale of the protests in Tehran, let alone the whole country.

But they spread rapidly during the evening. The cheers and chanting echoed even in customarily quiet middle-class neighbourhoods.

Many Iranians came out on to their roofs to shout “down with the dictator.”

It has become a challenge not just of an election result, not just to President Mahmoud Ahmadinejad, but to the supreme leader, Ayatollah Khamenei himself.

That means it is, in effect, a challenge to the whole basis of the Islamic Republic.

For two years I have watched as young, ambitious Iranians go about their lives with growing frustration.

They feel the system stifles their aspirations. Now they feel that their intelligence and their pride has been insulted by an election result many Iranians believe is blatantly fraudulent.

And President Ahmadinejad’s almost casual dismissal of their complaints just adds to the anger.

Make no mistake, President Ahmadinejad still has plenty of supporters.

Mr Ahmadinejad is confident in the support of the supreme leader

They turned out in large numbers in the victory rally he held in central Tehran on Sunday afternoon.

He has focused his rhetoric on foreign governments and the international media, blaming them for stirring up the trouble.

There is a danger now that the two sides could come to blows.

And many people will fear that the government will authorise the police to open fire, if the situation slides further out of control.

Yet it is hard to see what political compromise is possible.

Mr Ahmadinejad is defiant, confident in the support of the supreme leader.

The opposition will know that the formal appeal process has minimal chance of success.

It is a situation without precedent in the 30-year history of the Islamic republic, and the outcome is impossible to predict.

1 Response to Juan Cole on Iran : Why Mousavi Probably Won