These imaginary violations of religious liberty allow Texas politicians to pander to the religious right. 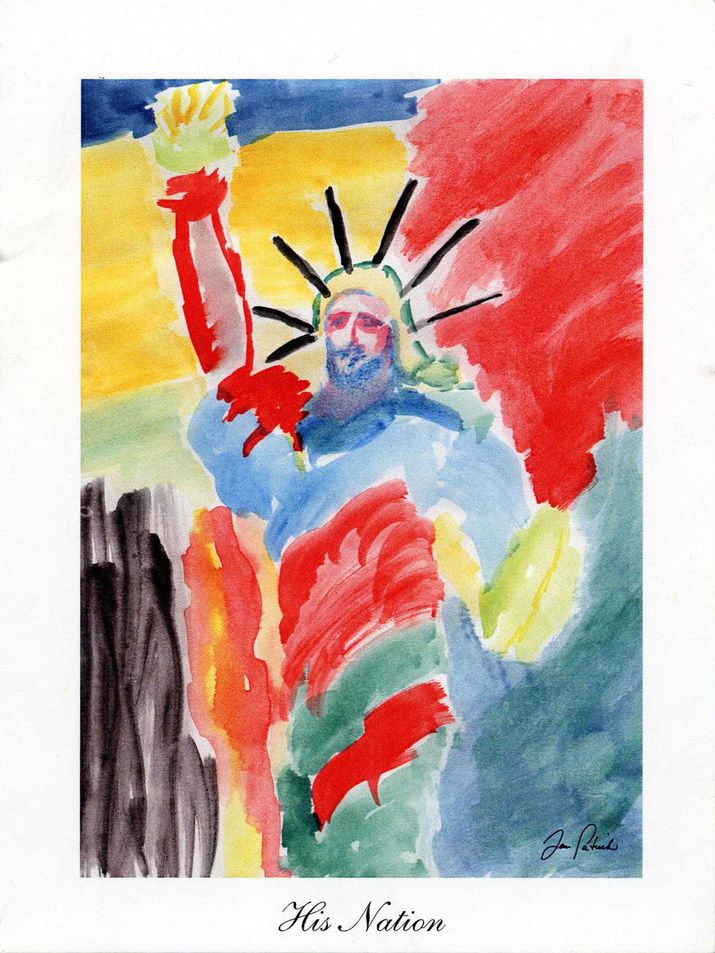 Lt. Gov. Dan Patrick’s watercolor with the face of Jesus on the Statue of Liberty.

SAN MARCOS — It will come as no surprise to anyone who watches Texas politics that Lt. Gov. Dan Patrick is a panderer — mostly pandering to the religious right. But Patrick is also dishonest in his pandering. It is one thing to tell people what they want to hear, but it is another to make claims that the author knows are false or misleading. That is exactly what Patrick has done in his latest “Special Contributor” column for the Austin American-Statesman.

In the December 31 column, Patrick stitches together several of his press releases to write about the great danger Texas Christians face: their imminent loss of religious freedoms. Thanks to Patrick, these dangers have been thwarted and all Christians throughout our great state can now rest easy, at least until Patrick can identify some more faux threats to their religious liberty.

Patrick lists three attacks on religious liberty
that he resisted in 2015.

Patrick lists three attacks on religious liberty that he resisted in 2015. The first two have nothing to do with a denial of a person’s religious liberty. Only the third one involves a possible denial of the right of government employees to engage in religious activity during off-time from their municipal jobs, but that is not the whole story.

The city government in Beaumont told some police officers that they could no longer hold Bible studies during work breaks and their lunch hour because no non-government activities are allowed at the workplace. This distinction seems to have escaped Patrick. Whatever one may think of the policy, it does not appear to be based on religious discrimination.

Two other claims of religious liberty violations made by Patrick are complete nonsense, rather than just misleading. Government employees are not entitled to express their religious views using government property to do so. This is what happened in Childress when police officers placed religious messages on their patrol cars. If patrol cars are public forums, I have a few bumper stickers I want to have displayed and promoted by the government on its vehicles. How about “e pluribus unum”?

A second false claim of religious liberty denial concerns government officials in Orange who allowed a “Christmas Nativity scene” to be placed on government property and were pressured to take it down. When the nativity scene was challenged as government support for, and promotion of, a particular religious view, the display was removed from public property — but only to prevent the display of a “Happy Holidays” banner by the Orange County Atheists of Texas. The manger scene was moved to private property near the City Hall and the constitutional violation of government support for religion was ended.

Patrick explains the extraordinary work that he led in the Legislature in 2015.

After discussing these three religious liberty concerns, Patrick explains the extraordinary work that he led in the Legislature in 2015. As he explains, “the Senate passed the Pastors Protection Act to protect houses of worship, religious organizations and their employees and pastors from being required to participate in same-sex marriage ceremonies if it would violate their religious beliefs.” Of course, no pastor has ever been required to officiate at any marriage ceremony, same sex or opposite sex. There is no need for the Pastors Protection Act because there is nothing for pastors to be protected from.

Joining Patrick in this absurdity is Attorney General Ken Paxton, who said, “No Pastor, Priest, Rabbi or other religious leader should be forced to perform or recognize a marriage that contradicts his or her sincere religious belief.” That’s good because that’s the way it has always been in this country. In fact, no supporters of this legislation provided any instance where a pastor had been sued for not performing a marriage ceremony.

These imaginary violations of religious liberty allow Texas politicians to pander to the religious right, a group that likes to imagine that they are a persecuted minority whenever the government doesn’t promote their religious views. As explained by the Rev. Rollin O. Russell, a church-state separation advocate from North Carolina, “Christian fundamentalists want cultural dominance for their religion and its views, and the attending right to sanction other religions. Anything less they view as denial of their religious freedom.”

I will offer some suggestions about what the committee should do.

In another attempt to promote Christian cultural dominance, Patrick gleefully announced that he had “charged the Senate State Affairs Committee with the task of studying and recommending how the state of Texas should work to affirm the constitutionally guaranteed religious liberty protections of all Texans.” What the committee should do has probably not occurred to Patrick, so I will offer some suggestions.

The committee is supposed to make recommendations to prevent the government from forcing “individuals, organizations or businesses to violate their sincerely held religious beliefs.” In that spirit, I hope they will include such things as prohibiting public officials from directing all those in attendance at government meetings to stand or bow their heads for a prayer or the Pledge of Allegiance to the U.S. flag or the Texas flag.

Directing participation by people who, for personal and religious reasons, do not engage in public prayer is government coercion. Requiring homage to an official flag of the government violates the religious beliefs of more than one organized religious group in Texas, as well as the moral character of many non-religious people.

The Senate committee might also recommend that government officials be prohibited from using public resources to promote prayer breakfasts and prayer events. Using taxpayer money to further these mostly Christian religious activities requires all citizens who pay taxes in Texas to support religious events that may or may not satisfy their own sincerely held religious beliefs and moral codes. The practices should not be allowed.

Another group that needs protection from religious coercion is public school athletes.

Another group that needs protection from religious coercion is public school athletes who are subjected to group prayers led or encouraged by their publicly-paid coaches. Often these prayers include the Christian “Lord’s Prayer,” which is not a part of the sincerely held religious beliefs of non-Christian groups and individuals.

Further, the committee should consider strengthening the right of children to receive competent medical care in spite of the sincerely held faith-healing religious beliefs of their parents. Such children deserve protection because parents with such beliefs are incapable of looking after their children’s best interests.

This protection will not prevent the parents from continuing to believe as they wish, but it will protect the most vulnerable from suffering or dying because of those beliefs. People like Patrick and Paxton, who support rights for those not yet born, should extend their concerns to helpless children who have been born.

The history of government interference in religious beliefs has been demonstrated by blanket surveillance of various religious groups without probable cause, especially Muslims after 9/11. The committee should consider legislation to prohibit such surveillance unless a warrant is obtained from a court of competent jurisdiction.

The Legislature also needs to look at the problem of Texas public school children being taught religious beliefs in science classes, especially the religious beliefs known as “creationism” and its sibling “intelligent design.” The State Board of Education has proven to be so infiltrated with right-wing religious followers that it has not adequately protected public school students from being taught creationism and its derivatives.

The committee also should research all restrictions on a woman’s right to contraception.

The committee also should research all restrictions on a woman’s right to contraception and abortion in Texas law to be sure they have strong secular origins and purposes, and are not derived from religious views. Restrictions that are found to be based in religious beliefs should be marked for rescission.

A problem throughout Texas in recent years is the sponsorship of religious symbols and signs by local governments. The committee should recommend that legislation be drafted to provide that no state agency, city, or county may sponsor, promote, support, or spend public revenues on any sign, picture, symbol, or message that concerns religious belief.

The committee also should consider new legislation to prohibit any system of invocations before any government body that does not include the proponents of all religious beliefs and non-belief. While it is preferable for there to be no religious component to the functioning of government, if invocations are allowed, there must be an opportunity to participate for people who hold every religious belief or life stance that may be represented among citizens in the jurisdiction or there will be actual religious discrimination based on the content of religious beliefs.