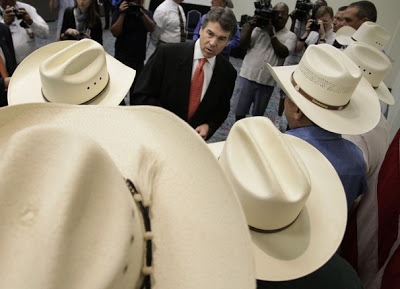 And a tip of the ten-gallon hat to the ‘Texas Miracle.’ Photo by Paul Moseley / Ft. Worth Star-Telegram.

The highs and the lows:

Buried in the “Room for Debate” pages of The New York Times online is an interesting little piece by Ruben Navarrette Jr., a columnist with The Washington Post Writers Group, Cnn.com contributor, and member of the USA Today board of contributors. Before he reached such lofty national heights, Navarrette was on the editorial board of The Dallas Morning News, and sometime in the early part of 2003 he had the opportunity to interview Governor Rick Perry when he dropped by the Morning News offices.

In his “Room for Debate” piece, Navarrette recalls that at the time of the interview, he had just read a series in The New York Times about McWane, Inc., a company based in Birmingham, Alabama, that was, at the time, one of the world’s largest manufacturers of cast-iron sewer and water pipe, and had an absolutely horrendous and Dickensian record when it came to the safety of its workers.

Navarrette says he mentioned to the governor that this notorious company had said that it “would only do business in two places: developing countries and Texas.” I asked the governor if he was bothered by this fact. He wasn’t, to put it mildly.

“Well,” Mr. Perry said… “I don’t take direction from The New York Times.” Then he changed the subject and proceeded to make the case for why many other companies had moved to Texas. He also adjusted his chair so that, for the rest of the meeting, he had his back to me. Message received.

Since Perry’s “Response” prayer rally in Houston, and the declaration of his candidacy for president, more and more nuggets of information have been surfacing about “Gov. Goodhair,” the secrets to his success, who his best buddies are, and the mediocre grades that characterized his passage through his college years.

And much chatter has arisen about the “Texas miracle” that appears, in the world of “damn lies and statistics,” to award credit to Perry’s stewardship for the (relative) lower unemployment rate and faster job growth in the great state of Texas than in much of the rest of the country during the recent economic meltdown.

No doubt there is much yet to surface about that miracle, as more pundits and commentators take a closer look under the hood of the Texas economic engine and discover all the low-wage jobs (Texas ties Mississippi for the most minimum-wage workers in the country), disparities between the rich and the middle class and working poor, and unequal tax burdens that fuel that engine. Complicated, of course, by a very large Mexican-American population that has a not-insignificant portion of socially conservative, just-grateful-not-to-be-caught in the border drug wars, component.

Meantime — for the record — here’s a short list of the highs and lows — the “A’s” and the “F’s” if you will — on the transcript of Rick Perry’s Texas miracle. It might begin to answer the question, at least, of why the McWane, Inc. management considered Texas to be equivalent to a third world country. For the B’s, C’s, D’s, and E’s, see the Texas on the Brink website.

[Sarito Carol Neiman was a founding editor of The Rag in 1966 Austin, and later edited New Left Notes, the national newspaper of Students for a Democratic Society (SDS). With then-husband Greg Calvert, Neiman co-authored one of the seminal books of the New Left era, A Disrupted History: The New Left and the New Capitalism and later compiled and edited the contemporary Buddhist mystic Osho’s posthumous Authobiography of a Spiritually Incorrect Mystic. Neiman currently lives in Junction, Texas. Read more articles by Sarito Carol Neiman on The Rag Blog]