Land of the Fearful, Home of the Almost Brave 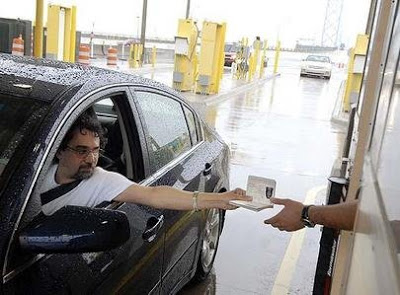 Starting June 1, 2009 anyone crossing into the United States from Canada will require a passport or a special document approved by the U.S. government. Photo: Craig Glover/Toronto Star.
Smile! The U.S. sees you coming
By Tonda MacCharles / May 23, 2009

DETROIT – About 15 metres before a car from Canada reaches the border inspection booth, the screenings begin.

A camera snaps your licence plate.

An electronic card reader mounted on a yellow post scans your car for the presence of any radio-frequency ID cards inside. If there is an enhanced driver’s licence embedded with biometric information, its unique PIN number is read without you offering it.

The Customs and Border Protection computer connects with your province’s database and in less than a second – .56 to be exact – your personal information is uploaded to a screen in the booth. A second camera snaps the driver’s face.

Welcome to the United States of America.

If Canadians were under the impression that the Canada-loving U.S. President Barack Obama would heed pleas to loosen border controls to ease trade and traffic, there should no longer be any confusion. He has not.

Beginning June 1, you’d better have that passport ready. Or if you have an enhanced driver’s licence from British Columbia, Manitoba or Quebec, make sure it’s in your wallet, ready to show. (Ontario is now processing applications for the cards.)

Some Canadian MPs, border state lawmakers and Detroit-Windsor area businesses expect the worst when the new controls kick in.

Obama’s top officials – Homeland Security Secretary Janet Napolitano and Secretary of State Hillary Clinton – signed off long ago on the June 1 deadline for the infamous Western Hemisphere Travel Initiative. That’s the George W. Bush-era policy that Congress pushed through under the 9/11 intelligence reform bill, which requires every person entering the United States by air, sea or land to carry a passport or U.S. government-approved secure identity document. 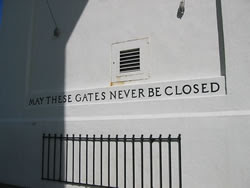 Napolitano says Canadians had better get used to it. “The future is that there will be a real border,” she told a trade group last month.

A post-mounted scanner screens your vehicle for radioactive material that could be used to build a “dirty bomb” – a probe so sensitive it will detect if you’ve recently had a medical test that used isotopes.

As you pull up to the booth, a computer monitor may be filling with information about you, even before the guard asks, “Where are you coming from? What’s your citizenship? Where are you headed? Why?”

If a border lookout, arrest warrant or criminal record pops up on the guard’s screen, or if something doesn’t quite add up – maybe you’re sweating bullets on a cold day – expect to get hauled over for a secondary inspection.

The port of entry at the Ambassador Bridge in Detroit – the busiest commercial land crossing in North America, through which a quarter of all Canada-U.S. trade passes – has strict controls, as does the Detroit-Windsor tunnel.

Border agents, packing pepper spray, collapsible batons and 9-mm automatic pistols, are the first point of contact for people and cargo alike. Sometimes their supervisors order vehicle sweeps at random. Then for 30 minutes, agents will pop every trunk, just for a look-see.

Down below the 80-year-old bridge, dozens of long-haul transport trailers are queued up to go through the same checks, and possibly pass through a giant gamma-ray screening facility that peers inside suspicious 18-wheelers.

Between the legal crossing points, all along the Canada-U.S. border, there’s a new reality.

While the U.S. is not constructing an 1,100-kilometre fence between itself and Canada, as it is doing along its southern border with Mexico, the makings of a virtual fence are in place along what was once known as the world’s longest undefended border.

High in the sky over North Dakota, an unmanned Predator drone is on patrol, equipped with an infrared security camera that looks forward 24 kilometres.

The drone is not authorized to fly in Canadian airspace, but it can peer across into Manitoba. Another one is to be stationed near Detroit next year to scan the Michigan- Ontario boundary.

More daytime and nighttime infrared camera, radar surveillance towers and remote motion sensors are being erected across the northern U.S. border with Canada.

And there are more boots on the ground than ever. Before 9/11, the U.S. had 340 Border Patrol agents along its Canadian border. By next year, there will be more than 2,000.

In Windsor, it makes MPs like the NDP’s Brian Masse nervous about “the militarization of the border.”

He points to the helicopters and drones, and Canada’s willingness to accept U.S. Coast Guard training exercises on the Great Lakes, where boats are equipped with machine guns that fire more than 600 bullets a minute.

It’s all “really changed the nature of the border itself,” Masse says.

Edward Alden, a Canadian journalist and senior fellow at the Council on Foreign Relations in Washington, wrote The Closing of the American Border, which documented the toll of overzealous border policies on the U.S. economy.

Alden does not see any evidence of change under Obama. Democrats don’t want to be seen as soft on homeland security, and have been “hawkish since Day One.” But they also are under pressure by a strong Hispanic voting bloc to treat the southern and northern border with what Napolitano calls “parity.”

This entry was posted in RagBlog and tagged Border Searches, Canada, Homeland Security, War on Terror. Bookmark the permalink.

1 Response to Land of the Fearful, Home of the Almost Brave