Lighten Up and Be Less Snooty and Judgmental 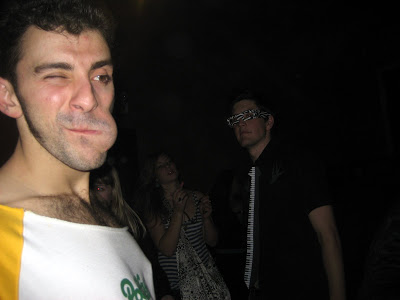 Sarah Palin stated again, most recently in her interview yesterday by ABC’s Charlie Gibson, that she has foreign policy experience because as governor of Alaska she has been in charge of that state’s National Guard, and because Alaska is, doggone it, “right next” to Russia.

This made me feel pretty good, because it made me realize that I have a whole lot of skills and experience which I hadn’t really appreciated before and that I could perhaps use to get myself out of this freelance journalism profession, which is not all that great from a financial perspective.

I, for instance, live very close to the garage where my mechanic works (I mean, I drive past the place every day and even buy my gas there), so I’m ready to be a car mechanic (I can’t tell you how many cars I’ve seen being gone over there, and have even sometimes watched a bit as my own vehicles were up on the lift). I also live literally across the street from a large forest, which qualifies me to be a number of things-forest ranger, lumberjack, and perhaps naturalist.
I’ve also been to the doctor many times, so maybe I should hang a shingle and open up a medical practice. I swear I’ve got all those exam questions by memory at this point, and they’ve got nurses to do the stuff with the arm cuff and the stethoscope.

Of course, the real money these days is in law, and there I’ve really got it nailed. Not only do several lawyers live right in my neighborhood, but I’ve actually been in court and seen lawyers at work. For that matter, I even had a lawyer argue a case for me once, when I was being charged with trespassing at the Pentagon. He wasn’t successful at getting my fine and jail time dropped, but hey, you learn from other people’s failures, too. Furthermore, I actually wrote a book with a co-author who is a lawyer. With all that experience, I could certainly be an attorney.

Over the years, I’ve spent time at the seashore, and even went on a one-week ocean sailing trip, so you’d have to admit oceanography is almost in my blood. Or perhaps I could be a sea captain. I’m sure I could do at least as well as the captain of the Exxon Valdez tanker.

Come to think of it, back when I was 16, I hitchhiked up to Alaska with a friend and spent the summer thumbing around the state, so I know that place like the back of my hand, which means if Sarah Palin gets elected and goes to Washington, maybe I could be governor of Alaska. And then, as governor I’d be commander of a National Guard unit, so I’d be qualified to be a vice president, or, should the opportunity present itself, even president of the United States. Actually, I’d be maybe more experienced than Palin for the job, because I grew up in Connecticut, and thanks to the small size of the states in my native New England, have actually been living closer to a foreign country-Canada-than she, living in Wasilla, has been living to Russia. In other words, when you think of it, my foreign policy experience is much greater than hers. Besides, I’ve actually visited Canada a few times, which really boosts my experience in international affairs.

I know some people think that jumping into jobs like president or vice president of the United States based upon what they might perceive as limited experience is presumptuous, but that’s because they aren’t being fair and open-minded. And I’ll admit that it’s hard, with relatively limited experience, to expect someone like Palin or me to measure up to the standard of someone like our current vice president, Dick Cheney, who came to his position after having served previously as presidential chief of staff, as secretary of defense, and as a member of Congress. I mean, that’s real experience, and it shows in the fine job he’s done as VP.

But we shouldn’t let examples like Cheney, or Donald Rumsfeld, another guy who took an important government post-in his case Secretary of Defense-after having considerable prior experience-make us obsess about experience. I mean, look at our current president. George W. Bush got elected in 2000, when his experience consisted of just two terms as governor of Texas, a state where the governor has a largely ceremonial role and most of the real work of government is handled by the legislature, and look what a great job he did in the White House! Furthermore, his only military experience was as a pilot in a Texas National Guard unit, most of which tour of duty he missed because he decided to work on his father’s failed election campaign instead, and because he didn’t want to take any drug tests, and look what a fine job he’s done as commander in chief.

This should all make Americans lighten up and be less snooty and judgemental about what they demand in terms of experience in presidential and vice presidential candidates. Palin in my view has proved her qualifications for the job. Yesterday she sent her young son off to battle in Iraq to fight against “the enemies who planned and carried out and rejoiced in the deaths of thousands of Americans” on 9-11 seven years ago. What better evidence do we need of this woman’s solid grasp of foreign affairs, history and combat?

Dave Lindorff is a Philadelphia-based journalist and columnist. His latest book is “The Case for Impeachment” (St. Martin’s Press, 2006). His work is available at http://www.thiscantbehappening.net/.
Source /

This entry was posted in RagBlog and tagged Humor, Sarah Palin. Bookmark the permalink.

2 Responses to Lighten Up and Be Less Snooty and Judgmental