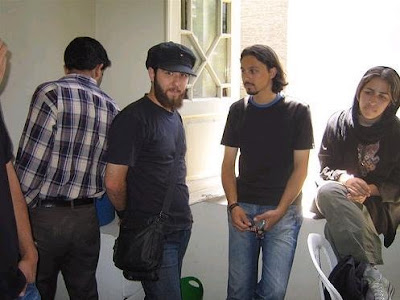 Besides the clear threats contained in Bush’s speech yesterday, Gen. Petraeus testified repeatedly this week before Congress that Iran was supplying weapons to Shiite militias what were being used to kill American soldiers and bomb Baghdad’s Green Zone. More missiles hit there this morning. McCain has also stated this week that he would not rule out a “pre-emptive” attack on Iran. Based on the renewed prominence of this theme, some pundits (Pat Buchanan in particular) have now stated their belief that such an attack will occur before Bush leaves office.

Until this week, it was widely believed that the rationale the Bush regime favored in order to justify attacking Iran was the claim that they were developing nuclear weapons. When this was refuted by the National Intelligence Estimate that was released a couple of months ago, it appeared that the ground had been cut from under the Bush warmongers. Now they’ve come up with a new rationale and they are spewing if forth every day.

Attacking Iran is back on the table and the antiwar movement needs to prepare for that possibility.

Rational arguments against attacking Iran remain. 1. To do so would incite an uprising against US troops by Iran’s allies among the Shiites in Iraq. Maybe, but Al-Sadr is principally an Iraqi nationalist and the closest allies of Iran are in the Al-Maliki government. Besides, Iraqis are Arabic-speaking Arabs and nothing unites them better than opposition to the Farsi-speaking “Persians”. 2. Oil prices would go through the roof. So what? The Bush regime’s primary constituency is Big Oil and they would make more mega-billions as a result. 3. Oil at $150 or more a barrel would sink the US economy. They don’t care if the Democrats are going to control both the White House and Congress. Let it be their problem. But if the attack could be timed just right – like in October – it might bail out a sinking McCain candidacy.

A year ago, we wrote and posted online the “Iran Pledge of Resistance Petition”. It basically stated that if the US attacked Iran, the signers would be in the streets organizing mass civil disobedience. We need to be ready to take that step and to publicize our readiness. The first step in that direction would be to unify the Austin antiwar movement. There are dozens of organizations in Austin that are antiwar – MDS, Austin Peace and Justice Coalition, Austin Against War, Third Coast Activist Alliance, CAMEO, Codepink, MoveOn, the Green Party, and Texans for Peace, just to name a few of the most obvious. Sentiment among the 7,000+ delegates to the Travis County Democratic Party convention last month was uniformly antiwar and the convention’s passed a resolution calling for immediate withdrawal from Iraq. Austin needs a broadly based antiwar council and that coalition needs to publicly state that it will react in the most militant non-violent manner to any attack on Iran.

In his speech on Thursday, Bush wasted little time before getting to the ominous subject of Iran.

Time and time again, he lumped the alleged threat from Iran in the same breath as the one from Al Qaeda, once again fusing enemies in the minds of the American people.

“Serious and complex challenges remain in Iraq, from the presence of Al Qaeda to the destructive influence of Iran,” he said, even before declaring that the surge has “renewed and revived the prospect of success.”

A little later, he said, “Iraq is the convergence point for two of the greatest threats to America in this new century: Al Qaeda and Iran.” (Bush has now elevated Iran over China as the looming threat of the century!)

And in the next paragraph, he said, “If we succeed in Iraq after all that Al Qaeda and Iran have invested there, it would be a historic blow to the global terrorist movement and a severe setback for Iran.”

But Bush was not content to be subtle about his belligerence toward Iran.

Listen to the saber rattle:

“The regime in Tehran also has a choice to make,” Bush said. “It can live in peace with its neighbor, enjoy strong economic and cultural and religious ties. Or it can continue to arm and train and fund illegal militant groups, which are terrorizing the Iraqi people and turning them against Iran. If Iran makes the right choice, America will encourage a peaceful relationship between Iran and Iraq. Iran makes the wrong choice, America will act to protect our interests, and our troops, and our Iraqi partners.”

By “America will act,” Bush is making damn clear that he intends to go ahead and bomb Iran.

We can keep telling ourselves that Bush wouldn’t be so foolish as to widen the war to Iran when the one in Iraq is going so badly. But foolishness has never stopped him before.

They put not only Tehran on notice.

They put Congress and the American people on notice.

This man is planning on waging another illegal war, and we need to do all that we can, nonviolently, to stop him.

Source / The Progressive / The Rag Blog