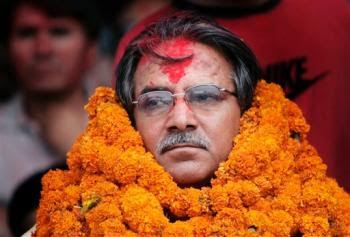 Communist party of Nepal, Maoist, president Prachanda, who uses only first name, gestures after winning his seat in recent heldelections, in Katmandu, Nepal, Saturday, April 12, 2008. Former rebel Communistparty of Nepal is leading in most of the constituency, where vote counting hasbegan for the Thursday election that will rewrite its constitution, the latesteffort to transform a troubled, near-medieval land into a modern democracy. Redcolor on the faces is the scented powder which also signifies the color of theparty flag. AP Photo by Manish Swarup / AP

KATMANDU, Nepal — After spending a decade leading a communist insurgency in the mountains of Nepal, former top rebel Prachanda became the newest member Saturday of an assembly that will chart the Himalayan country’s future.

Prachanda, whose rebel nom de guerre means “the fierce one,” led a powerful showing by the former Maoists rebels in early results from Thursday’s elections. The vote is expected to usher in sweeping changes to the Himalayan country and likely signals the end of a 239-year-old royal dynasty.

The Maoists, who are still considered a terrorist group by the United States, have so far won 44 seats out of the 79 where counting has been completed. The ex-rebels, formally known as the Communist Party of Nepal (Maoist), were leading in most of the other areas where votes were still being tallied, the Election Commission said Sunday.

“This victory is a command by the Nepali people to establish lasting peace,” Prachanda, 54, told reporters after the result was announced. “We are fully committed to the peace process andmultiparty democracy and to rebuild this country.”

King Gyanendra, who is set to lose his throne soon after final election results are announced, praised the election’s turnout in a brief message issued Sunday, the Nepalese new year.

“The enthusiastic participation of the Nepalese people in the Constituent Assembly elections,through which they have emphatically reiterated their firm resolve not to compromise the nation’s existence, independence and integrity under any circumstance, is a source of satisfaction for us,” the king said.

Former U.S. President Jimmy Carter, whose Carter Center sent 62 observers to monitor the election, described the election as one of the “most profoundly important” ones he has witnessed. He said it marked the end of a decade of political violence and the likely transformation of Nepal from a Hindu kingdom to a democratic republic.

“If the Maoists do gain a substantial share of power, I hope the United States will recognize and do business with the government,” Carter said at a news conference in Katmandu.

Complete results for the 601-seat Constituent Assembly were not expected for a few weeks, though officials said they should have a clear picture of what the assembly will look later this coming week.

None of the parties who contested the vote — from the Maoists to centrist democrats to old-school royalists — are expected to win a majority. But the Maoists’ strong early showing has surprised most observers, who before the vote had them placing third behind the country’s traditional powers.

The election has been touted as the cornerstone of the 2006 peace deal with the Maoists, whose 10-year-long insurgency left about 13,000 people dead. The agreement followed weeks of unrest that forced Nepal’s autocratic king to cede absolute power, which he had seized a year earlier.

Prachanda, whose real name is Pushpa Kamal Dahal, got almost twice the number of votes than his closest competitor, said election official Devendra Parajuli after declaring him the winner of one of Katmandu’s constituencies.

Afterward, supporters covered him with flower garlands and chanted slogans hailing his victory. Hundreds crowded the Birendra Convention Center in Katmandu where the votes were counted, waving red-and-white flags bearing the hammer and sickle.

“I want to assure the international community, especially India and China … that we will have good relations with them and work to secure all cooperation for Nepal,” Prachanda said.

Scattered shootings and clashes that killed two people on election day and eight others in the days leading up to the poll did not deter millions of Nepalis from casting ballots in the country’s first election in nine years.

Along with the Maoists’ 44 seats, the centrist Nepali Congress won 12 and the Communist Party of Nepal (United Marxist-Leninist) took 14 by Sunday, the Election Commission said.

A complete count of votes in all 240 constituencies was expected to take weeks because of Nepal’s rugged, mountainous terrain. Another 335 seats are being chosen through a nationwide proportional representation system with quotas for women and Nepal’s myriad ethnic and caste groups. The remaining 26 seats are reserved for major politicians who don’t win seats.

Nonetheless, the Maoists were already predicting a complete victory.

“We will get a clear majority in the final results,” said Hisila Yami, a senior Maoists member. “This is a reflection of the people’s desire for a republic that our party has always stood for.”

The Election Commission said there would be re-polling in at least 60 locations because of voting irregularities. That number could rise as election complaints are investigated, it said. 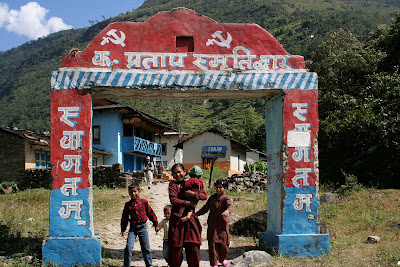 A family in maoist-controlled valley in Nepal. Photo by Pavel Novak.

Bush must recognise Maoist’s victory in Nepal: Carter
The Times of India / April 13, 2008

KATHMANDU: Criticising the Bush Administration’s policy not to engage in parleys with the Maoists in Nepal, former US President Jimmy Carter on Saturday said that if Communist Party of Nepal-Maoist (CPN-M) does well in the Constituent Assembly, the US must recognise it.

He also said that the outcome of the elections would “truly represent the aspirations of the people”.

“The Carter Centre found that the majority of Nepali voters participated in a remarkable and relatively peaceful constituent assembly election on April 10, 2008. Preliminary reports indicate that the administration of this election was well executed, bearing testimony to the hard work of election officials and the determination of Nepal’s people to ensure that their country continues on the path to sustainable peace and democracy,” the former US President said reading out from a statement issued by the centre.

Carter further said that for Nepal it is essential “to remain calm, to await final results, and where there are disputes, to follow appropriate legal procedures.”

He added that his centre would continue to observe the district counting and national tabulation until they are complete.

“We encourage all Nepalis to remain actively involved in the drafting of the constitution to ensure that the process is transparent, accountable and inclusive,” nepalnews.com quoted Carter, as saying.

This entry was posted in RagBlog and tagged Bush, The Left, The World. Bookmark the permalink.