The CELAC Summit was unprecedented, with all the leaders from Latin America and the Caribbean gathering together with a common goal: unity. 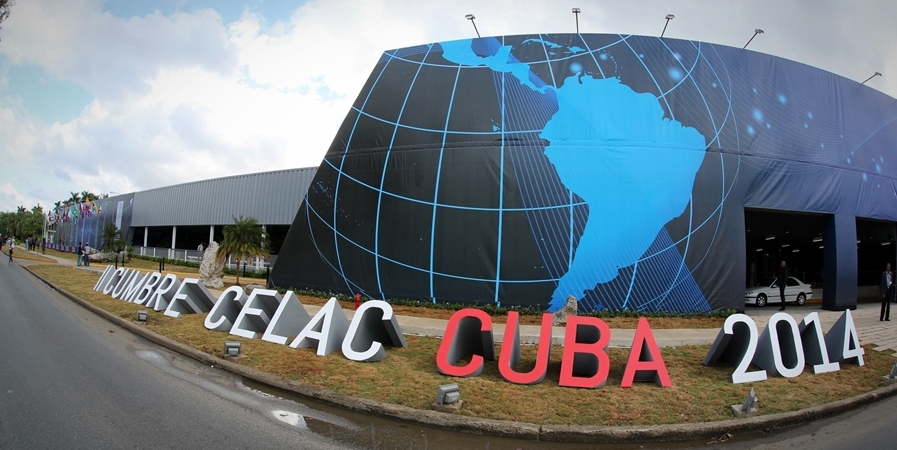 The CELAC summit. Photo by Roberto Leon / The Rag Blog.

HAVANA — All of Latin America and the Caribbean gathered in Havana January 28-29 for the second summit of the Community of Latin American and Caribbean States (CELAC). CELAC is the new version of the OAS for the current leaders of the region.

The summit was to be a grandstand event and especially important for Cuba as the pro tempore president of the organization. Never before had Cuba been host to an affair of this magnitude.

The CELAC gathering in Havana had on its wings the weight of being unprecedented, not just because of the number of states attending — 33 in total — but because of its historical significance, all the leaders from Latin America and the Caribbean gathering together with a common goal in mind: unity.

Days before the event, a number of so-called dissident groups in Cuba stated to the EFE news agency that they were planning on holding their own parallel meeting in protest of the event — to tell their side of the story regarding Cuba. Organized by a foreign dissident organization, Centre for Openness and Development of Latin America (CADAL), the parallel event was hoping to unite leading members of the Cuban opposition and independent political activists.

If the situation in Cuba is such that dissident organizations feel the need to protest I totally stand behind them in their right to do so. My only quarrel is when these groups lay back and wait for someone from somewhere else to land on the island in order to help “coordinate dissent.”

Why don’t these guys organize properly? Or is it that they have no common agenda? We have heard that one representative of one group did meet with President Sebastian Piñera of Chile and a member of another with the Ceremonial Head of the Costa Rican delegation, Ingrid Picado.

Two different groups met independently with two different representatives from two very different countries, and in both cases, each of the presidents is an “outgoing” one; Piñera come March will cede the post to Michelle Bachelet and Costa Rica is in the middle of a presidential campaign. There´s not much to say about that other than stating the obvious: they were given an audience by those who no longer make much of a difference.

Each group seems to have its own agenda and they pull on the rope of dissent from different directions.

Each group seems to have its own agenda and they pull on the rope of dissent from different directions. Nothing was heard from the other prominent dissidents save for allegations that they were being spied on (honestly not news); that their cell phones wouldn’t reach anyone; that the streets were covered with uniformed police and plainclothes officers patrolling and controlling the “dissidents.”

Given the level of assistance in Havana of prominent heads of state, why wouldn’t there be plainclothes officers and uniformed ones all over the place? Have any of these dissidents ever heard of what New York City looks like during the UN General Assembly?

These dissident groups had the chance of a lifetime and they blew it. Or was it that the $20 million of taxpayer money from USAID didn’t arrive in time for them to figure out a plan of action?

Meanwhile, not far from all the pomp and circumstance, the real parallel summit was taking place. No dissidents, just one man alone in the sun room of his home, nonchalantly receiving heads of state. Chatting for hours with the leaders of Latin America on issues ranging from conflicts in Northern Africa and how to find a solution to end hunger and poverty, to how to better forge the future of this continent… to simply reminiscing on days past and friends no longer present.

The man holding the unique parallel summit was the 87-year-old Fidel Castro, who, unlike the dissidents in Cuba, has a perfect idea of what he wants and how to make it happen.

[Margarita Alarcón Perea was born in Havana, Cuba, and raised in New York City. She studied at Karl Marx Stadt in East Germany and Havana, and is a graduate of Havana University in linguistics. She has taught English translation and North American twentieth century literature, and worked in the Cuban music industry. She is currently a news analyst for Cubadebate in Havana and contributes to The Rag Blog and The Huffington Post. Maggie’s father is Ricardo Alarcón, past president of the Cuban National Assembly. Read more articles by Margarita Alarcón on The Rag Blog.]