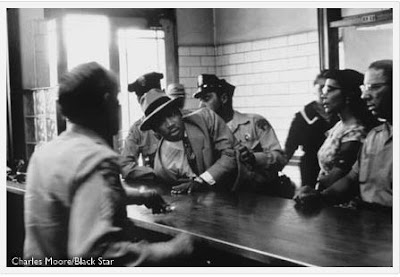 Soon after Martin Luther King’s birthday became a federal holiday in 1986, I began prodding mainstream media to cover the dramatic story of King’s last year as he campaigned militantly against U.S. foreign and economic policy. Most of his last speeches were recorded. But year after year, corporate networks have refused to air the tapes.

Last night NBC Nightly anchor Brian Williams enthused over new color footage of King that adorned its coverage of the 40th anniversary of the assassination. The report focused on the last phase of King’s life. But the same old blinders were in place.

NBC showed young working class whites in Chicago taunting King. But there was no mention of how elite media had taunted King in his last year. In 1967 and ‘68, mainstream media saw Rev. King a bit like they now see Rev. Jeremiah Wright.

Back then they denounced King’s critical comments; today they simply silence them.

While noting in passing that King spoke out against the Vietnam War, mainstream reports today rarely acknowledge that he went way beyond Vietnam to decry U.S. militarism in general: “I could never again raise my voice against the violence of the oppressed in the ghettos,” said King in 1967 speeches on foreign policy, “without having first spoken clearly to the greatest purveyor of violence in the world today — my own government.”

In response to these speeches, Newsweek said King was “over his head” and wanted a “race-conscious minority” to dictate U.S. foreign policy. Life magazine described the Nobel Peace Prize winner as a communist pawn who advocated “abject surrender in Vietnam.” The Washington Post couldn’t have been more patronizing: “King has diminished his usefulness to his cause, to his country, and to his people.”

When King’s moral voice moved beyond racial discrimination to international issues, the New York Times attacked his efforts to link the civil rights and antiwar movements.

King’s sermons on Vietnam could get as angry as those of Barack Obama’s ex-pastor: “God didn’t call America to engage in a senseless, unjust war . . .We’ve committed more war crimes almost than any nation in the world.”

In 1967, King was also criticizing the economic underpinnings of U.S. foreign policy, railing against “capitalists of the West investing huge sums of money in Asia, Africa and South America, only to take the profits out with no concern for the social betterment of the countries.” Today, capitalists of the West reap huge profits from their domination of global media.

Thankfully, we now have the Internet and independent media outlets where King’s later speeches are available for the ages.

If King had survived to hear the war drums beating for the invasion and occupation of Iraq – amplified by TV networks and the New York Times front page and Washington Post editorial page — there’s little doubt where he’d stand. Or how loudly he’d be speaking out.

And there’s little doubt how big U.S. media would have reacted. On Fox News and talk radio, King would have been Dixie Chicked. . .or Rev. Wrighted. In corporate centrist outlets, he’d have been marginalized faster than you can say Noam Chomsky.

One suspects King would be marveling at the rise of Barack Obama and the multiracial movement behind him. But would he be happy with Obama and other Democratic leaders who heap boundless billions onto the biggest military budget in world history?

In 1967, King denounced a Democratic-controlled Congress for fattening the Pentagon budget while cutting anti-poverty programs, declaring: “A nation that continues year after year to spend more money on military defense than on programs of social uplift is approaching spiritual death.”

Jeff Cohen is an associate professor of journalism at Ithaca College, and founding director of the Park Center for Independent Media. He founded the media watch group FAIR in 1986, and has written and lectured about King’s life and death for 35 years.

This entry was posted in RagBlog and tagged African-American, Media, Peace Movement, Vietnam. Bookmark the permalink.