Massive Baghdad Protest Against the SOFA* 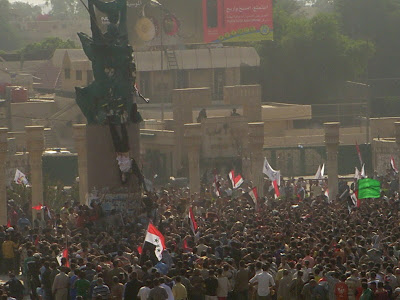 An effigy of President Bush hangs on the pedestal where a famous statue of Saddam Hussein once stood in central Baghdad. It was burned after a rally for followers of anti-American cleric Muqtuda al-Sadr Friday, November 21, 2008. Photo: Caesar Ahmed.
Sadr followers protest Iraqi-U.S. pact in huge rally
By Adam Ashton / November 21, 2008

Sheik Abdul Hadi al Mohammadawi read a nationalistic speech on behalf of Sadr urging a rejection of any pacts with the U.S., charging that approving one would infringe on Iraqi sovereignty.

The rally took place in Firdous Square, the site of an iconic image of the Iraq war’s early days. It’s the spot where U.S. Marines toppled a statue of Saddam Hussein in April 2003 when they took control of Baghdad.

Sadr’s supporters on Friday hung an effigy of President George W. Bush from the statue’s pedestal during the protest. A crowd gathered around the effigy after Mohammadawi’s speech, hurling garbage at it and then pulling it down and burning it.

Otherwise, the rally was peaceful, guarded by the Iraqi military and Sadrists. Prayers encouraging unity among Iraqis followed the speeches.

Men crowded every inch of the street, sitting on colorful prayer rugs. They carried Iraqi flags and portraits of Sadr.

Mohammadawi targeted part of his speech at Iraqi members of parliament, who are considering the security agreement. He said the U.S. should leave unconditionally and hand over the country to Iraq’s military.

“Our safety cannot be solved by the occupation,” he said. “Iraqis are able to protect their country. They will take responsibility by themselves.”

The security agreement has cleared Iraq’s Cabinet and is awaiting a vote in parliament. It calls for the U.S. to leave Iraq by Dec. 31, 2011, and it gives Iraq much more control over U.S. military operations in the meantime.

Sadr’s political party has tried to derail the pact in parliament, shouting down readings of the bill over the past two days and pledging to fight it.

“History will record the honorable position of the Sadrists and those who join together to reject the humiliation” of the agreement, Mohammadawi said.

An alliance of Shiite and Kurdish parties led by Maliki backs the agreement, contending that it’s the best deal they can reach to end the American occupation. They make up a majority of the 275 seats in parliament.

The Sadr party has made its opposition to the agreement known from the outset. The pact’s supporters are concentrating on drawing Sunni Muslim parties to their side, which would enable them to claim a national accordance backing the pact.

Building that support would meet the direction of the Grand Ayatollah Ali al Sistani, who’s advised that the pact gain a consensus for the benefit of Iraq. He’s the leading religious authority among Iraq’s Shiites, and his support often is considered crucial for the success of political decisions.

Hadi al Ameri, the head of the Badr Organization, said Friday’s march wouldn’t disrupt parliament’s vote on the pact. The organization is a member of the Shiite alliance, which also includes Maliki’s party.

The status of forces agreement was a prominent topic Friday at mosques throughout the country.

Hashim al Tai, a Sunni cleric and a member of parliament, issued a moderate appeal, encouraging parliament to consider amendments to the security pact submitted by his Tawafuq alliance. Tawafuq wants compensation for war victims and assurances that many detainees will be released instead of turned over to the Iraqi government.

Iraqi law prohibits amending the agreement, however. The Iraqi Cabinet approved the agreement Sunday, and that made it a final treaty between two states. Parliament can approve or reject it, but lawmakers can’t modify it.

Shiite cleric Nael al Moussawi told his following at al Khalani mosque that the parliament debate was a sign of democracy.

“What happened in parliament is happening a lot in other parliaments,” he said. “Everyone has the right to voice his opinion.”

Men who attended the rally in Firdous Square echoed the Sadrist line, charging that the treaty was an infringement on Iraqi authority. They contended that the exit of American forces would ease tensions among Iraqis rather than inflame them.

“By God, the violence will not come back, because Iraqis are a united people,” said Jasim Kadhim, 35.

Sadr’s militia, the Mahdi Army, was blamed for some of the sectarian violence that gripped Iraq in 2006 and 2007. It’s been on a cease-fire, but Sadr has suggested that it will rise up if the security agreement passes.

Many at the rally were skeptical about the prime minister’s motives. They sang, “Maliki is the new Saddam,” as they marched away from the rally up Saadoun Street.

“The agreement on the status of forces doesn’t help Iraq,” said Halim Hafidh, 31. “They will not give us our full rights.”