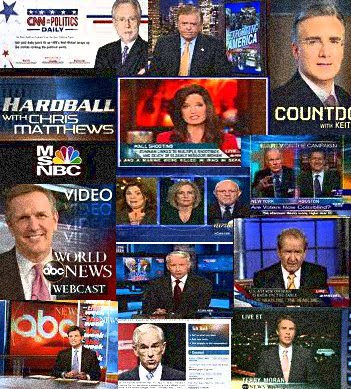 Graphic by Larry Ray / The Rag Blog.
‘Like pond minnows swarming around a morsel tossed into the water, every news outlet on TV, and especially cable talk shows, have a feeding frenzy when a speculative gem is broadcast by any one of them.’
By Larry Ray / November 9, 2008

After months of endless guessing, speculating, pontificating, fear mongering and blathering, came the evening of November 4th, and the TV talking heads had spectacularly shown their asses. Ordinary American voters had it right. The talking heads had just been jabbering.

Let’s set this up a little first. As a retired nightly newscaster from the old school, I stayed on the air just into the gender-correct Alphonse and Gaston vaudeville co-anchor era, I know the difference between correct and commercial chowder. I lament what passes for news and commentary today. I wish America’s broadcast and cable news operations were still run by tough-nosed editors, news directors and assignment editors instead of by their corporate headquarters.

Today’s news and commentary offerings, with very few exceptions, are run strictly as major revenue producers. Most are dog food factories with higher paid, better looking employees. Good looks, perfect hairdos and smooth teleprompter reading skills are the hallmarks of “good” today. What they read is second to how it all looks. America’s remaining three major networks, broadcasting over the public airwaves, still have one newscaster sitting in the chair introducing stories beamed in via satellite as 30 second to two minute “packages.” What little network news there is sandwiched between interminable commercial breaks is generally OK, excluding the fluff stories. Cable news has lots more time to fill, and so there is lots more about Paris Hilton than there is about Paris, France, and lots more fluff.

Like pond minnows swarming around a morsel tossed into the water, every news outlet on TV, and especially cable talk shows, have a feeding frenzy when a speculative gem is broadcast by any one of them. In a matter of minutes everyone is doing their own version of the gem. “Bradley effect, is a good example.” “Bradley effect” sent the 20-something desk producers and ‘researchers’ to the Google servers. Faster than you can say “Exclusive,” all news and sorta-news outlets were predicting a dire hidden force eluding the polls that menaced the Obama campaign. In a loud “Not so” to the prognosticating pundits, more white men across the nation, and even into the old South, voted for Obama than for any Democrat since Jimmy Carter. More voted Obama than for Bubba Clinton.

Obama Hussein, the secret Muslim terrorist, was not going to get the Jewish vote, and Florida was portrayed right up to election day as teetering and a toss up. A huge helpless sigh issued from TV sets across America. Ooops. Wolf got blitzed and Olberman was overruled. In a turnout even larger than that for John Kerry, 78 percent of America’s Jews voted for Obama. And endless shuttles to the polls from retirement homes in Florida as well as the Cuban-American vote there helped produce a handy win for Obama.

The ones listening hardest to appellations like terrorist, socialist, most liberal, inexperienced, were apparently the TV pundits who endlessly repeated and combined them ad nauseam. The ones really listening to America’s heartbeat and making their own assessments clearly were average American voters, not the pundits.

There is a lesson in here somewhere for those who fill the time on cable channels and for folks reading teleprompters and doing interviews. Producers and millionaire show “hosts,” why not do your own Google searches for, “initiative,” “resourceful,” “original,” “variety,” “lucid” and “accurate.” We’ll see how you do in four years. Faux News, never mind, you don’t count.