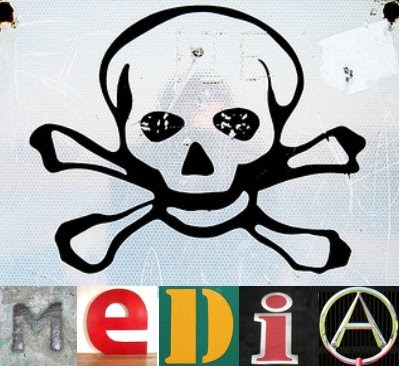 In 1993, novelist Michael Crichton riled the news business with a Wired magazine essay titled “Mediasaurus,” in which he prophesied the death of the mass media—specifically the New York Times and the commercial networks. “Vanished, without a trace,” he wrote.

The mediasaurs had about a decade to live, he wrote, before technological advances—”artificial intelligence agents roaming the databases, downloading stuff I am interested in, and assembling for me a front page”—swept them under. Shedding no tears, Crichton wrote that the shoddy mass media deserved its deadly fate.

“[T]he American media produce a product of very poor quality,” he lectured. “Its information is not reliable, it has too much chrome and glitz, its doors rattle, it breaks down almost immediately, and it’s sold without warranty. It’s flashy but it’s basically junk.”

Had Crichton’s prediction been on track, by 2002 the New York Times should have been half-fossilized. But the newspaper’s vital signs were so positive that its parent company commissioned a 1,046-foot Modernist tower, which now stands in Midtown Manhattan. Other trends predicted by Crichton in 1993 hadn’t materialized in 2002, either. Customized news turned out to be harder to create than hypothesize; news consumers weren’t switching to unfiltered sources such as C-SPAN; and the mainstream media weren’t on anyone’s endangered species list.

When I interviewed Crichton in 2002 about his failed predictions for Slate, he was anything but defensive.

“I assume that nobody can predict the future well. But in this particular case, I doubt I’m wrong; it’s just too early,” Crichton said via e-mail.

As we pass his prediction’s 15-year anniversary, I’ve got to declare advantage Crichton. Rot afflicts the newspaper industry, which is shedding staff, circulation, and revenues. It’s gotten so bad in newspaperville that some people want Google to buy the Times and run it as a charity! Evening news viewership continues to evaporate, and while the mass media aren’t going extinct tomorrow, Crichton’s original observations about the media future now ring more true than false. Ask any journalist.

So with white flag in hand, I approached Crichton to chat him up once more. Magnanimous in victory, he said he had often thought about our 2002 discussion and was happy to revisit it. (Read the uncut e-mail interview in this sidebar.)

Although Crichton still subscribes to the New York Times and Wall Street Journal, he dropped the Los Angeles Times a year ago—”with no discernable loss.” He skims those two dailies but spends 95 percent of his “information-gathering time” on the Web.

He concedes with a shrug that the personalized infotopia he crystal-balled in 1993 has yet to arrive. When we talked in 2002, Crichton scoffed at the Web. Too slow. Its page metaphor, too limiting. Design, awful. Excessive hypertexting, too distracting. Noise-to-signal ratio, too high.

Today he’s more positive about the medium. He notes with satisfaction that the Web has made it far easier for the inquisitive to find unmediated information, such as congressional hearings. It’s much faster than it used to be, and more of its pages are professionally assembled. His general bitch is advertisements in the middle of stories, and he’s irritated by animation and sounds in ads. “That, at least, can often be blocked by your browser,” he says. 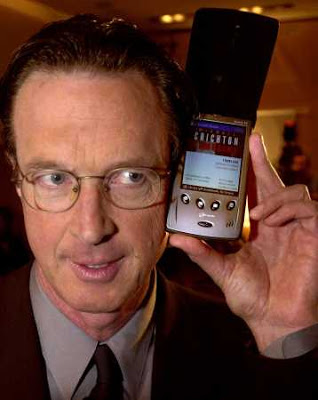 Michael Crichton holding miniature computer.
In 1993, Crichton predicted that future consumers would crave high-quality information instead of the junk they were being fed and that they’d be willing to pay for it. He’s perplexed about that part of his prediction not panning out, but he has a few theories about why it hasn’t.

“Senior scientists running labs don’t read journals; they say the younger people will tell them about anything important that gets published—if they haven’t heard about it beforehand anyway,” he says. “So there may be other networks to transmit information, and it may be that ‘media’ was never as important as we who work in it imagine it was. That’s an argument that says maybe nobody really needs a high-end service.”

It will take a media visionary, he believes—somebody like Ted Turner—to create the high-quality information service he foresaw in his 1993 essay. In addition to building the service, the visionary will also have to convince news consumers that they need it.

Sounding like a press critic, Crichton criticizes much of the news fed to consumers as “repetitive, simplistic, and insulting” and produced on the cheap. Cable TV news is mostly “talking heads and food fights” and newspaper reporting mostly “rewritten press releases,” he says.

Crichton suggests that readers and viewers could more objectively measure the quality of the news they consume by pulling themselves “out of the narcotizing flow of what passes for daily news.” Look at a newspaper from last month or a news broadcast.

“The biggest change is that contemporary media has shifted from fact to opinion and speculation. You can watch cable news all day and never hear anything except questions like, ‘How much will the Rev. Wright hurt Obama’s chances?’ ‘Is Hillary now looking toward 2012?’ ‘How will McCain overcome the age argument?’ These are questions for which there are endless answers. Contentious hosts on cable shows keep the arguments rolling,” he says.

Crichton believes that we live in an age of conformity much more confining than the 1950s in which he grew up. Instead of showing news consumers how to approach controversy coolly and intelligently, the media partake of the zealotry and intolerance of many of the advocates they cover. He attributes the public’s interest in Mike Huckabee, Ron Paul, and the Rev. Jeremiah Wright to its hunger for a wider range of viewpoints than the mass media provide.

He tosses out a basket of questions he’d like to see the press tackle, some of which I’ve seen covered. “What happened at Bear Stearns?” got major play this week, after Crichton answered my questions, in a Wall Street Journal series. And I know I’ve seen “How much of the current price of gas can be attributed to the weak dollar?” answered a couple of times but can’t remember where. (Answer: a lot.) But such Crichton questions as “Why have hedge funds evaded government regulation?” and what specific lifestyle changes will every American have to make “to reduce CO2 emissions by 60 percent?” would be great assignments for news desks.

“I want a news service that tells me what no one knows but is true nonetheless,” he says.

Who You Calling Mediasaurus? — Jack Shafer’s 1992 feature on Chrichton and the media. / Slate.

This entry was posted in RagBlog and tagged Authors, Internet, Journalism, Media, Technology. Bookmark the permalink.