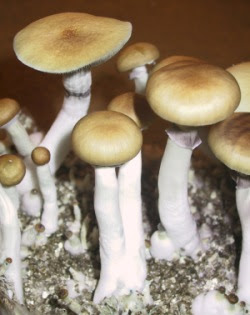 ‘Shrooms.
Heck, they could have just asked us…

In a follow-up to research showing that psilocybin, a substance contained in “sacred mushrooms,” produces substantial spiritual effects, a Johns Hopkins team reports that those beneficial effects appear to last more than a year.

Writing in the Journal of Psychopharmacology, the Johns Hopkins researchers note that most of the 36 volunteer subjects given psilocybin, under controlled conditions in a Hopkins study published in 2006, continued to say 14 months later that the experience increased their sense of well-being or life satisfaction.

“Most of the volunteers looked back on their experience up to 14 months later and rated it as the most, or one of the five most, personally meaningful and spiritually significant of their lives,” says lead investigator Roland Griffiths, Ph.D., a professor in the Johns Hopkins departments of Psychiatry and Behavioral Sciences and Neuroscience.

In a related paper, also published in the Journal of Psychopharmacology, researchers offer recommendations for conducting this type of research.

The guidelines caution against giving hallucinogens to people at risk for psychosis or certain other serious mental disorders. Detailed guidance is also provided for preparing participants and providing psychological support during and after the hallucinogen experience. These “best practices” contribute both to safety and to the standardization called for in human research.

“With appropriately screened and prepared individuals, under supportive conditions and with adequate supervision, hallucinogens can be given with a level of safety that compares favorably with many human research and medical procedures,” says that paper’s lead author, Mathew W. Johnson, Ph.D., a psychopharmacologist and instructor in the Johns Hopkins Department of Psychiatry and Behavioral Sciences.

The two reports follow a 2006 study published in another journal, Psychopharmacology, in which 60 percent of a group of 36 healthy, well-educated volunteers with active spiritual lives reported having a “full mystical experience” after taking psilocybin.

Psilocybin, a plant alkaloid, exerts its influence on some of the same brain receptors that respond to the neurotransmitter serotonin. Mushrooms containing psilocybin have been used in some cultures for hundreds of years or more for religious, divinatory and healing purposes.

Fourteen months later, Griffiths re-administered the questionnaires used in the first study — along with a specially designed set of follow up questions — to all 36 subjects. Results showed that about the same proportion of the volunteers ranked their experience in the study as the single most, or one of the five most, personally meaningful or spiritually significant events of their lives and regarded it as having increased their sense of well-being or life satisfaction.

“This is a truly remarkable finding,” Griffiths says. “Rarely in psychological research do we see such persistently positive reports from a single event in the laboratory. This gives credence to the claims that the mystical-type experiences some people have during hallucinogen sessions may help patients suffering from cancer-related anxiety or depression and may serve as a potential treatment for drug dependence. We’re eager to move ahead with that research.”

Griffiths also notes that, “while some of our subjects reported strong fear or anxiety for a portion of their day-long psilocybin sessions, none reported any lingering harmful effects, and we didn’t observe any clinical evidence of harm.”

The research team cautions that if hallucinogens are used in less well supervised settings, the possible fear or anxiety responses could lead to harmful behaviors.

These studies were funded by grants from NIDA, the Council on Spiritual Practices, and the Heffter Research Institute.

Additional researchers who contributed to this work include Matthew W. Johnson, Ph.D. and Una D. McCann, M.D. of the Department of Psychiatry and Behavioral Sciences, Johns Hopkins University School of Medicine; psychologist William A. Richards of the Johns Hopkins Bayview Medical Center; and Robert Jesse of the Council on Spiritual Practices, San Francisco.