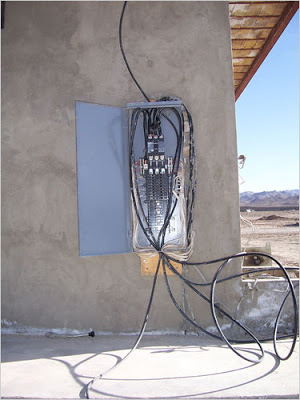 At a 173rd Airborne base in Shin Kay, Afghanistan, in 2005, an outdoor, 200-ampere breaker panel, above, was uncovered and wired from the top. Photo courtesy NYT.
After Deaths, U.S. Inspects
Electric Work Done in Iraq
By James Risen / July 1, 2008

WASHINGTON — The Pentagon has ordered electrical inspections of all buildings in Iraq maintained by KBR, a major military contractor, after the electrocutions of several United States service members.

Gen. David H. Petraeus, the American commander in Iraq, told Congress of the new inspections while also disclosing that at least 13 Americans had been electrocuted in Iraq since the war began. Previously, the Pentagon said that 12 had been electrocuted. In addition to those killed, many more service members have received painful shocks, Army officials say.

General Petraeus’s written statement was made public on Monday afternoon by Senator Bob Casey, Democrat of Pennsylvania. The statement said that of the 13 Americans electrocuted, 10 were in the Army, 1 in the Marines, and 2 were contractors.

Staff Sgt. Ryan Maseth, a Green Beret from Pennsylvania, died Jan. 2 when he stepped into a shower and was electrocuted at his base in Baghdad. His death prompted investigations this spring by Congress and the Pentagon’s inspector general into evidence that poor electrical work at facilities used by American personnel had led to other electrocutions.

Officials now acknowledge that Army experts warned as early as 2004 that poor electrical work by contractors was creating dangerous conditions for American soldiers. But those warnings were largely ignored.

Since the American invasion of Iraq in 2003, tens of thousands of American troops have been housed in older Iraqi buildings. KBR and other companies have been paid millions of dollars to repair and upgrade the buildings, including their electrical systems.

In February 2007, nearly a year before Sergeant Maseth was killed, KBR issued a technical report to the Defense Contract Management Agency citing safety concerns about the grounding and wiring in the building in the Radwaniya Palace complex in Baghdad being used as housing for Sergeant Maseth’s unit in the Army’s Fifth Special Forces Group.

For the next year, neither KBR nor the Pentagon made repairs.

Sergeant Maseth’s family has filed a wrongful death suit against KBR. Last week the family filed a motion in Federal District Court in Pittsburgh that included a new statement from another Green Beret, Sgt. Justin Hummer of the 10th Special Forces Group, saying that he suffered electrical shocks four or five times in 2007 in the same shower where Sergeant Maseth died.

Another soldier, Specialist Stephan Michael Pabst, of the 19th Special Forces Group, has also provided a statement in the case stating that he suffered electrical shocks while living in the same complex late last year. He said he had issued a repair order to KBR, but the contractor never adequately fixed the problem, and he continued to suffer shocks in his shower.

“The Pentagon has a compelling obligation to tell the American people what happened with these deaths, and what they are doing to prevent this from happening again,” Senator Casey said Monday in an interview.

Thanks to Michael Moore / The Rag Blog