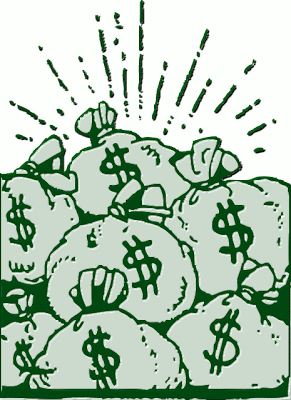 ‘Hundreds of thousands of Americans woke up yesterday morning and decided it was time for revolt’
By Michael Moore / September 30, 2008

Everyone said the bill would pass. The masters of the universe were already making celebratory dinner reservations at Manhattan’s finest restaurants. Personal shoppers in Dallas and Atlanta were dispatched to do the early Christmas gifting. Mad Men of Chicago and Miami were popping corks and toasting each other long before the morning latte run.

But what they didn’t know was that . The politicians never saw it coming. Millions of phone calls and emails hit Congress so hard it was as if Marshall Dillon, Elliot Ness and Dog the Bounty Hunter had descended on D.C. to stop the looting and arrest the thieves.

The Corporate Crime of the Century was halted by a vote of 228 to 205. It was rare and historic; no one could remember a time when a bill supported by the president and the leadership of both parties went down in defeat. That just never happens.

A lot of people are wondering why the right wing of the Republican Party joined with the left wing of the Democratic Party in voting down the thievery. Forty percent of Democrats and two-thirds of Republicans voted against the bill.

The presidential race may still be close in the polls, but the Congressional races are pointing toward a landslide for the Democrats. Few dispute the prediction that the Republicans are in for a whoopin’ on November 4th. Up to 30 Republican House seats could be lost in what would be a stunning repudiation of their agenda.

The Republican reps are so scared of losing their seats, when this “financial crisis” reared its head two weeks ago, they realized they had just been handed their one and only chance to separate themselves from Bush before the election, while doing something that would make them look like they were on the side of “the people.”

Watching C-Span yesterday morning was one of the best comedy shows I’d seen in ages. There they were, one Republican after another who had backed the war and sunk the country into record debt, who had voted to kill every regulation that would have kept Wall Street in check — there they were, now crying foul and standing up for the little guy! One after another, they stood at the microphone on the House floor and threw Bush under the bus, under the train (even though they had voted to kill off our nation’s trains, too), heck, they would’ve thrown him under the rising waters of the Lower Ninth Ward if they could’ve conjured up another hurricane. You know how your dog acts when sprayed by a skunk? He howls and runs around trying to shake it off, rubbing and rolling himself on every piece of your carpet, trying to get rid of the stench. That’s what it looked like on the Republican side of the aisle yesterday, and it was a sight to behold.

The 95 brave Dems who broke with Barney Frank and Chris Dodd were the real heroes, just like those few who stood up and voted against the war in October of 2002. Watch the remarks from yesterday of Reps. Marcy Kaptur, Sheila Jackson Lee, and Dennis Kucinich. They spoke the truth.

The Dems who voted for the giveaway did so mostly because they were scared by the threats of Wall Street, that if the rich didn’t get their handout, the market would go nuts and then it’s bye-bye stock-based pension and retirement funds.

And guess what? That’s exactly what Wall Street did! The largest, single-day drop in the Dow in the history of the New York Stock exchange. The news anchors last night screamed it out: Americans just lost 1.2 trillion dollars in the stock market!! It’s a financial Pearl Harbor! The sky is falling! Bird flu! Killer Bees!

Of course, sane people know that nobody “lost” anything yesterday, that stocks go up and down and this too shall pass because the rich will now buy low, hold, then sell off, then buy low again.

But for now, Wall Street and its propaganda arm (the networks and media it owns) will continue to try and scare the bejesus out of you. It will be harder to get a loan. Some people will lose their jobs. A weak nation of wimps won’t last long under this torture. Or will we? Is this our line in the sand?

Here’s my guess: The Democratic leadership in the House secretly hoped all along that this lousy bill would go down. With Bush’s proposals shredded, the Dems knew they could then write their own bill that favors the average American, not the upper 10% who were hoping for another kegger of gold.

So the ball is in the Democrats’ hands. The gun from Wall Street remains at their head. Before they make their next move, let me tell you what the media kept silent about while this bill was being debated:

1. The bailout bill had NO enforcement provisions for the so-called oversight group that was going to monitor Wall Street’s spending of the $700 billion;

2. It had NO penalties, fines or imprisonment for any executive who might steal any of the people’s money;

3. It did NOTHING to force banks and lenders to rewrite people’s mortgages to avoid foreclosures — this bill would not have stopped ONE foreclosure!;

4. It had NO teeth anywhere in the entire piece of legislation, using words like “suggested” when referring to the government being paid back for the bailout;

5. Over 200 economists wrote to Congress and said this bill might actually WORSEN the “financial crisis” and cause even MORE of a meltdown.

Put a fork in this slab of pork. It’s over. Now it is time for our side to state very clearly the laws WE want passed. I will send you my proposals later today. We’ve bought ourselves less than 72 hours.

2 Responses to Michael Moore : Bucks Not Delivered; People Say ‘No’