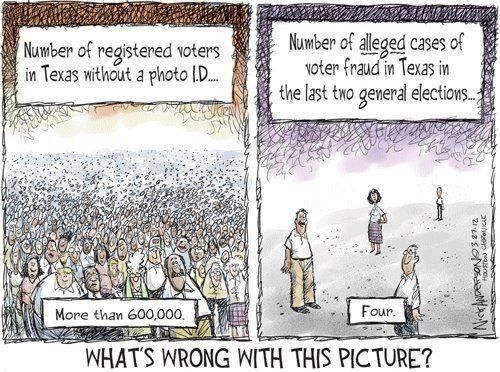 AUSTIN — The pre-dawn decision of a majority of Supreme Court Justices on October 18 to deny 600,000 Texans the right to vote in the upcoming election is among the court’s most patently irrational decisions since it declared George W. Bush the winner of the Florida presidential balloting 15 years ago by preventing the state from fairly counting all of the votes cast.

And make no mistake about this latest decision: it, too, is about votes — votes that the Republican majority on the Supreme Court worries will go overwhelmingly to Democrats. But it shouldn’t matter who receives the votes. What matters is that, in our system, the people should be able to vote without unnecessary and unjust interference from politicians in the legislatures and on the Supreme Court.

The people should be able to vote without unnecessary and unjust interference
from politicians.

As has often been the case of late, Justice Ruth Bader Ginsburg made the most poignant arguments against the majority’s decision:

Justice Ginsburg referred to the new Texas voter ID law as threatening “public confidence in elections” and recognized that the Supreme Court’s refusal to uphold the district court’s injunction is very likely to enforce “a purposely discriminatory law.”

Solicitor General Donald B. Verrilli, Jr. argued in favor of upholding the district court’s injunction: “Texas cannot now contend that it is injured, let alone irreparably so, by having to remind poll workers about past voting procedures with which they are already intimately familiar.” But such arguments are beyond the ken of most Texas voters and a majority of the Supreme Court.

Recently, I had an experience that reinforces many of Justice Ginsburg’s and Solicitor General Verrilli’s views. Two low-income people now living in Texas, who had been married in another state, decided to use a new common surname by hyphenating their two last names. They obtained new social security cards using their new surname. Yet, the DPS would not provide them a voter certificate in their new surnames without having a picture ID that used their new names. They had their prior DPS ID cards in their birth names, but no acceptable picture IDs with their new surnames.

The only quick method to satisfy the new Texas voter ID law so they could vote in November was to file a name change petition in a state district court. The cost of each petition was $277, plus the cost of certified copies of the order to be presented to DPS, along with the DPS charge of $11 each for new ID cards as a result of the name changes. After many hours of work and the help of a pro bono attorney, they secured their new ID cards in time to register to vote.

It is worth noting that Attorney General Greg Abbott, who vigorously prosecuted this case all the way to the Supreme Court to overturn the injunction, stands to benefit personally from his work. As the leading candidate for governor, he is likely to benefit from disenfranchising 600,000 voters who are not likely to support him.

But Abbott is deaf to such conflicts, as are most of his supporters. He will pay no penalty for grossly violating conflict-of-interest standards and values. So-called “values voters” don’t see conflict-of-interest prohibitions as values worth honoring. Their only interest is in right-wing values that favor the wealthy and powerful over ordinary people.