Texas is not alone in its willingness to restrict its upscale education to a ‘possessive investment
in whiteness.’ 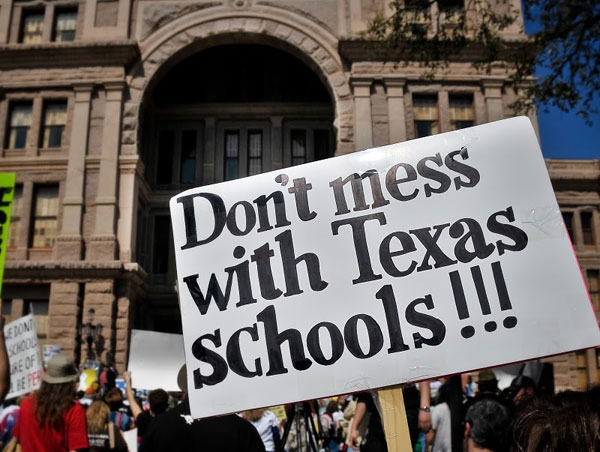 AUSTIN — The Texas legislature seems determined to govern with compulsive error repetition. Consider the recurring issue of education budgets and its subtext of directed disadvantage. This issue has ping-ponged between plaintiffs and state defendants for almost a half century.

Now it appears we are cutting a new swath down the same path — with one important distinction. August also brought news from the Department of Education. It projects that this fall minority students (54.7%) will outnumber white students (45.3%) in U.S. public schools.

Austin Independent School District already reflects this realty. Of 87,336 students in AISD in 2013, just under 29% are non-minority white; 8.7% are African-American, a drop of 1% since 2010. Latino youth are enrolled in growing numbers, at 60%. Asian-American/Pacific Islanders remain at 3% while American Indians hold steady at just one third of 1%.

The 2010 census showed Austin’s total population more robustly distributed: 48.7% listed as white, non-Hispanic, with Texas at 45%. When all minorities are compared, Texas remains a minority majority state. Austin schools also show the DNA split among its students is not static. Since 2010, the number of Latino students grew by 14%, but African-American students dropped by 10%, reflecting the continuing decline in Austin’s African-American population. But class issues provide another reason for adequately funding schools. The 15% increase in AISD disadvantaged students brings that population to 61%. Poverty disproportionally falls along lines of race and ethnicity.

Neither the state nor the nation can afford its future to be determined by the talent of less than half its population.

The need for educational equity takes on new urgency given these numbers. Neither the state nor the nation can afford its future to be determined by the talent of less than half its population — non-minority whites — while the minority youth, a group predicted to grow even larger in number, is mostly consigned to lesser schools. Schools that ultimately lead to constricted skills and options. It is a pattern familiar in underdeveloped nations where only those fortunate enough to afford private schools can be sure to see their children prosper. As a result, a country’s economy and general well-being languishes.

The current legal battle mirrors a recurring Texas tug of war in a legislated attempt to distribute selective limitations through the public schools. It’s a nasty game highlighted in 1968 when Demetrio Rodriguez and other parents in the Edgewood Independent School District challenged the underfunding of minority schools in San Antonio. In a nutshell, Texas ties the quality of education to the appraised value of neighborhood homes each school serves. The more elegant the homes, the more elite the educational opportunities. Conspicuous consumption as educational voucher.

The Texas design makes class a determinate of future possibilities.

Arguments based on equity stalled after the judge hearing that case ruled in 1973 that the right to an education did not exist. This effectively meant that the case had no standing. But in 1984, the Mexican American Legal Defense and Educational Fund sued Texas Commissioner William Kirby and others on behalf of Edgewood and additional districts. MALDEF took the case, to which 67 other school districts had joined, all the way to the Texas Supreme Court, which ruled unanimously in the plaintiffs’ favor in 1989, finding that the Texas funding method violated Article VII, Section 1 of the State Constitution. The Legislature met in various sessions but was unable to resolve conflict over funding formulas, largely from rich districts that objected to equalization.

Finally in 1991, Gov. Ann Richards signed legislation that began to address inequities. Dubbed by media as “the Robin Hood Act,” the concept stoked resentment over the weakening of class privilege and slowed educational equity. Constitutional compliance as a legislative goal worthy of coverage never had a chance once Robin Hood surfaced as a theme.

Once again the conflict revolves around compliance with the constitution.

Once again the conflict revolves around compliance with the constitution. It may be a good time to remember Molly Ivins who described her position on such legal conflicts:

The flag in this case may be Texan.

But the issue is national as well. Texas is not alone in its willingness to restrict its upscale education to a “possessive investment in whiteness” as described by George Lipstiz in his book by that name. He states that “Opposition to school desegregation has enabled whites to preserve de facto advantages they held as a result of an earlier era’s overt de jure segregation.”

But today’s argument over school funding centers on the desegregation of dollars.

Lipstiz cites Gary Orfield, whom he says “suggests the superiority of suburban schools is taken for granted as a right attendant to home ownership, while desegregation is viewed as a threat to a system that passes racial advantages from one generation to the next.”

These authors examine the institutional history of generational deprivation from GI home loans shaped by residential segregation, to FHA loans that discriminated and the resulting link to well-being determined by home sites and the schools that serve them.

The argument today again centers on the movement of money, not people.

The argument today again centers on the movement of money, not people. The “busing” of funding to deliver educational equity.

Kozol’s more recent work, first described in Harpers Magazine’s 2005 cover story — “Still Separate, Still Unequal: America’s Apartheid” — reminded readers where the legacy of segregation continues to carve contemporary history in the urban north as well as in resistant Southern states where old ways continue. In The Shame of the Nation, Kozol points to “the restoration of apartheid schooling in America,” in which the withholding of adequate funding for children assigned to those schools dooms their education to a playing field full of potholes.

In de facto segregation of Austin and other Texas cities, this description applies. As camouflage, underfunded schools are often claimed to be “diverse.” Using an example from New York, Kozol points to the misleading use of the word “diversity” in the conflict over educational equity there. In official school descriptions, “A system with 2,800 black and Hispanic students, one Asian and three whites,” he writes, “is referred to as ‘diverse.’”

Usage of such terms remind me of those used to advertise the early condo march into East Austin, which described the neighborhood as “exotic,” then as “diverse,” even while taxes erased small businesses that often sold the former and pushed out much of the population who defined the latter.

The result, described by one long-time resident, who has managed to hang on to a modest home despite its assault by exorbitant tax increases, guts familiar areas. “I didn’t leave East Austin,” she said, “it left me.”

The recent Austin American Statesman article that documented class segregation here, complete with maps, shows how much Austinites shrink from difference. Great on a menu, not too welcome in a zip code.

In recalling the landmark educational desegregation ruling — Brown vs Board of Education — Kozol points to embedded hypocrisy between the theater of equity rulings and the stonewalling of their realization.

So we may be obliged, in this respect, to live with the ideas and names of heroes and with the words of court decisions that official culture honors, but official actions and the policies of school boards and the preferences of highly influential sectors of our urban populations fiercely disavow.

In fact, the undermining of the public school system moves the nation away from one of the primary pillars that distinguishes this country and a strong democracy from those of the “third world.” A common element in underdeveloped nations is the denial of intellectual growth. Where there is a small elite, private schools become a thriving business. For the majority, public schools and limited years of mandatory attendance limit opportunity.