Michael Moore : Saving the Big 3 for You and Me 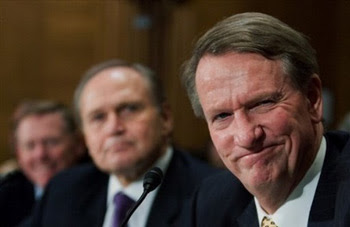 ‘Congress must save the industrial infrastructure that these companies control and the jobs they create. And it must save the world from the internal combustion engine.’
By Michael Moore / December 3, 2008

I drive an American car. It’s a Chrysler. That’s not an endorsement. It’s more like a cry for pity. And now for a decades-old story, retold ad infinitum by tens of millions of Americans, a third of whom have had to desert their country to simply find a damn way to get to work in something that won’t break down:

My Chrysler is four years old. I bought it because of its smooth and comfortable ride. Daimler-Benz owned the company then and had the good grace to place the Chrysler chassis on a Mercedes axle and, man, was that a sweet ride!

When it would start.

More than a dozen times in these years, the car has simply died. Batteries have been replaced, but that wasn’t the problem. My dad drives the same model. His car has died many times, too. Just won’t start, for no reason at all.

A few weeks ago, I took my Chrysler in to the Chrysler dealer here in northern Michigan — and the latest fixes cost me $1,400. The next day, the vehicle wouldn’t start. When I got it going, the brake warning light came on. And on and on.

You might assume from this that I couldn’t give a rat’s ass about these miserably inept crapmobile makers down the road in Detroit city. But I do care. I care about the millions whose lives and livelihoods depend on these car companies. I care about the security and defense of this country because the world is running out of oil — and when it runs out, the calamity and collapse that will take place will make the current recession/depression look like a Tommy Tune musical.

And I care about what happens with the Big 3 because they are more responsible than almost anyone for the destruction of our fragile atmosphere and the daily melting of our polar ice caps.

Congress must save the industrial infrastructure that these companies control and the jobs they create. And it must save the world from the internal combustion engine. This great, vast manufacturing network can redeem itself by building mass transit and electric/hybrid cars, and the kind of transportation we need for the 21st century.

And Congress must do all this by NOT giving GM, Ford and Chrysler the $34 billion they are asking for in “loans” (a few days ago they only wanted $25 billion; that’s how stupid they are — they don’t even know how much they really need to make this month’s payroll. If you or I tried to get a loan from the bank this way, not only would we be thrown out on our ear, the bank would place us on some sort of credit rating blacklist).

Two weeks ago, the CEOs of the Big 3 were tarred and feathered before a Congressional committee who sneered at them in a way far different than when the heads of the financial industry showed up two months earlier. At that time, the politicians tripped over each other in their swoon for Wall Street and its Ponzi schemers who had concocted Byzantine ways to bet other people’s money on unregulated credit default swaps, known in the common vernacular as unicorns and fairies.

But the Detroit boys were from the Midwest, the Rust (yuk!) Belt, where they made real things that consumers needed and could touch and buy, and that continually recycled money into the economy (shocking!), produced unions that created the middle class, and fixed my teeth for free when I was ten.

For all of that, the auto heads had to sit there in November and be ridiculed about how they traveled to D.C. Yes, they flew on their corporate jets, just like the bankers and Wall Street thieves did in October. But, hey, THAT was OK! They’re the Masters of the Universe! Nothing but the best chariots for Big Finance as they set about to loot our nation’s treasury.

Of course, the auto magnates used be the Masters who ruled the world. They were the pulsating hub that all other industries — steel, oil, cement contractors — served. Fifty-five years ago, the president of GM sat on that same Capitol Hill and bluntly told Congress, what’s good for General Motors is good for the country. Because, you see, in their minds, GM WAS the country.

What a long, sad fall from grace we witnessed on November 19th when the three blind mice had their knuckles slapped and then were sent back home to write an essay called, “Why You Should Give Me Billions of Dollars of Free Cash.” They were also asked if they would work for a dollar a year. Take that! What a big, brave Congress they are! Requesting indentured servitude from (still) three of the most powerful men in the world. This from a spineless body that won’t dare stand up to a disgraced president nor turn down a single funding request for a war that neither they nor the American public support. Amazing.

Let me just state the obvious: Every single dollar Congress gives these three companies will be flushed right down the toilet. There is nothing the management teams of the Big 3 are going to do to convince people to go out during a recession and buy their big, gas-guzzling, inferior products. Just forget it. And, as sure as I am that the Ford family-owned Detroit Lions are not going to the Super Bowl — ever — I can guarantee you, after they burn through this $34 billion, they’ll be back for another $34 billion next summer.

So what to do? Members of Congress, here’s what I propose:

1. Transporting Americans is and should be one of the most important functions our government must address. And because we are facing a massive economic, energy and environmental crisis, the new president and Congress must do what Franklin Roosevelt did when he was faced with a crisis (and ordered the auto industry to stop building cars and instead build tanks and planes): The Big 3 are, from this point forward, to build only cars that are not primarily dependent on oil and, more importantly to build trains, buses, subways and light rail (a corresponding public works project across the country will build the rail lines and tracks). This will not only save jobs, but create millions of new ones.

2. You could buy ALL the common shares of stock in General Motors for less than $3 billion. Why should we give GM $18 billion or $25 billion or anything? Take the money and buy the company! (You’re going to demand collateral anyway if you give them the “loan,” and because we know they will default on that loan, you’re going to own the company in the end as it is. So why wait? Just buy them out now.)

3. None of us want government officials running a car company, but there are some very smart transportation geniuses who could be hired to do this. We need a Marshall Plan to switch us off oil-dependent vehicles and get us into the 21st century.

This proposal is not radical or rocket science. It just takes one of the smartest people ever to run for the presidency to pull it off. What I’m proposing has worked before. The national rail system was in shambles in the ’70s. The government took it over. A decade later it was turning a profit, so the government returned it to private/public hands, and got a couple billion dollars put back in the treasury.

This proposal will save our industrial infrastructure — and millions of jobs. More importantly, it will create millions more. It literally could pull us out of this recession.

In contrast, yesterday General Motors presented its restructuring proposal to Congress. They promised, if Congress gave them $18 billion now, they would, in turn, eliminate around 20,000 jobs. You read that right. We give them billions so they can throw more Americans out of work. That’s been their Big Idea for the last 30 years — layoff thousands in order to protect profits. But no one ever stopped to ask this question: If you throw everyone out of work, who’s going to have the money to go out and buy a car?

These idiots don’t deserve a dime. Fire all of them, and take over the industry for the good of the workers, the country and the planet.

What’s good for General Motors IS good for the country. Once the country is calling the shots.

P.S. I will be on Keith Olbermann tonight (8pm/10pm/midnight ET, Wednesday, Dec. 3) to discuss this further on MSNBC.

This story is also posted on Michael Moore’s websute.

1 Response to Michael Moore : Saving the Big 3 for You and Me