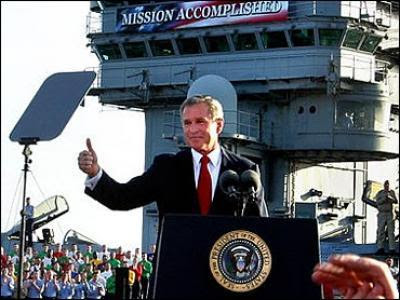 WASHINGTON – The White House said Wednesday that it had “paid a price” for the “Mission Accomplished” backdrop to US President George W. Bush’s May 1, 2003 Iraq speech, saying it left the wrong impression.

“President Bush is well aware that the banner should have been much more specific, and said, ‘Mission Accomplished For These Sailors Who Are On This Ship On Their Mission,'” said spokeswoman Dana Perino.

“We have certainly paid a price for not being more specific on that banner. And I recognize that the media is going to play this up again tomorrow, as they do every single year,” she said.

The “Mission Accomplished” banner hanging behind Bush on the USS Abraham Lincoln aircraft carrier has become a powerful symbol to his critics of how badly he underestimated the difficulties ahead in Iraq, where more than 4,000 US soldiers have paid the ultimate price.

What has become an annual act of political contrition, mixed with defiance, had special import because of November US presidential elections shaped by the war and its architect — both hugely unpopular with the US public.

The White House’s explanation for the banner repeatedly changed as the insurgency in Iraq revved up, though aides have steadfastly pointed out that Bush never said “mission accomplished” in his speech.

Bush said “major combat operations in Iraq have ended” and declared that “the battle of Iraq is one victory in a war on terror that began on September the 11, 2001 — and still goes on.”

But even that has drawn pointed questions, with former Defense Secretary Donald Rumsfeld saying he had fought to have the White House remove the phrase from the remarks. The White House denies Rumsfeld’s account.

And one week later, on June 5, 2003, Bush told US troops at Camp As Sayliyah in Qatar: “America sent you on a mission to remove a grave threat and to liberate an oppressed people, and that mission has been accomplished.”

The White House says that Bush was plainly referring to the goal of ousting Iraqi dictator Saddam Hussein, the chief aim of the March 2003 US-led invasion.

And the official answer to “who put up the banner” has changed — as the death toll rose, the White House and Bush himself said the sailors had put it up on their own, even though aides had initially boasted of their stagecraft.

Then Bush aides admitted that the White House designed and built it, but insisted they did so at the sailors’ request, and that it celebrated the ship and its crew — not victory in Iraq.