Our Hands Are Tainted with Innocent Blood 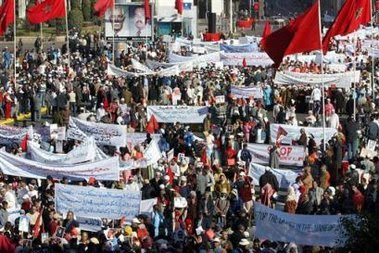 True commitment to stopping the war in Iraq requires a global human rights strike, in which the working population of the world stops producing, until the governments and the corporations realize that the voice of the people does indeed matter, says Pablo Ouziel.

For a while now, I have been thinking about what George W. Bush signifies from a socio-political perspective. Looking at the world from the time of the ‘Big Bang’ of September 11th, 2001, until today almost seven years later, one can clearly observe how monstrous our human interaction has become. After much reading and analysis, I now understand that September 11th was not the starting point of a new world order, but to the contrary, it was purely the end of a specific human state of affairs.

When one grows up in the west, our history books tell us stories about past events in our world. As we grow up, those same stories shape the way in which we look at the world around us. Once this history is indoctrinated into our minds, it frames the scope of our objective judgment. This in turn, leads to a very narrow analysis of our current reality.

As westerners we have the tendency to feel superior to the rest of the human species. Somehow, we have come to believe that our crusades, empires and colonization have led us to a higher understanding of kindness, compassion, love and equality. As westerners, we seem to see ourselves in a higher plane of collective awareness, intellectual and spiritual attainment. I do not doubt for a single minute that in other cultures they have similar prejudices, but I learned from an early age through Christian scriptures, that one must look deep into his or her consciousness, in order to identify mistakes and make corrections. Therefore, for me it is important to focus only on the culture that I know, I live, and that I am an active member of — the western world, as defined by the politicians of the ‘Axis of Good’ who govern us.

We are very comfortable in the west, all of us. Even the most deprived are not as deprived as the whole of Iraq, and by the whole of Iraq, I do mean everyone including the Al Qaeda terrorists, the international soldiers, the Iraqi militias, the possible Iranian insurgents, the government officials, doctors and nurses, contractors, private army operatives, NGO workers, the rich, the poor, the women, men and the children. Nobody there is as good as we are here. Iraq is just one of the many examples of places where the whole population is on its knees as we in the west enjoy our ‘morally evolved’ societies.

People in Haiti are eating mud cakes because of the soaring food prices, the people in Gaza have no electricity, in Afghanistan, the only royal visit they receive, is of a British prince dressed in military gear going to kill on Afghan soil. In India, the farmers are committing suicide due to failed harvests of genetically modified Monsanto crops. Around the world, people are rioting because of lack of food or basic human necessities. Yet in the west, we can move around freely, we can cross borders and fly our budget airlines from capital to capital, observing the comforts of western existence. Organized streets, clean cars, wonderful shopping malls, great monuments, everything is civilized and could be admired, that is, if it was honest. But it isn’t, it is morally wrong and deep down we all know it. We know it, but we just don’t want to do anything about it, because we are comfortable. Only a very small proportion of the population would truly change their position for that of a person in Iraq. I suppose that is why we choose to keep Iraq as a problem of our governments, and the terrorists whom must be eliminated to protect us from ‘evil’.

Read all of it here. / Middle East Online

This entry was posted in RagBlog and tagged Dissent, Existential Angst, Iraq. Bookmark the permalink.