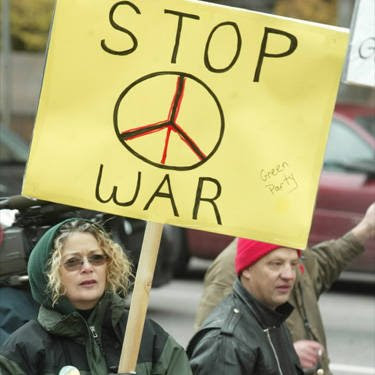 Protesters at Hofstra University, site of the presidential debate, on Oct. 15. Photo by The West / College OTR.

Around the time that Barack Obama and John McCain bent over backwards to show that they commiserated with the “hurtin’” middle class, two anti-war activists were physically hurt protesting outside of the debate held at Hofstra University. One, Nicholas Morgan, fractured a cheekbone when trampled by a Mounted Unit horse. In the end, fifteen protestors who identified themselves as Iraq War veterans were arrested.

The West / College on the Record

See video of protest, Below.

HEMPSTEAD, N.Y. — Pandemonium erupted outside Hofstra University tonight at around 8pm, an hour before the final presidential debate of the 2008 campaign was scheduled to begin there, when mounted police charged protesters and spectators.

Fifteen people were reportedly arrested and three injured. Protesters included a contingent of the group Iraq Veterans Against the War. Members of the group intended to submit questions to the the candidates but never had the chance. Local police on horseback drove the protesters away from the university’s David S Mack Sports and Exhibition Complex, where the debate was held, knocking some to the ground and in at least one case trampling them.

Earlier in the day, Jean Stevens of Manhattan, a spokeswoman for peace group Code Pink, said the anti-war protesters were “here to bring our message to both candidates and both parties to stop the war.” — Newsday.

Video of protest by David Mathison