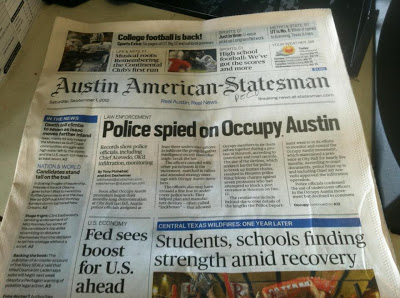 UPDATE: The Houston Chronicle reported on Sept. 5 that, according to Austin Assistant Police Chief David Carter, “High-ranking officials in the Austin Police Department had no knowledge that undercover Austin officers provided protesters with devices before an Occupy Houston event that led to seven demonstrators being charged with felonies,” and that he and Police Chief Art Acevedo “first learned of the lockbox accusations when the case went to trial.”

The Chronicle reported that District Judge Joan Campbell criticized Harris County prosecutors for not disclosing that the lockboxes were made by undercover Austin police, and also reported that defendant Ronnie Garza, who is seeking to have the charges dropped, “stood with about a dozen other protesters outside Austin police headquarters Wednesday to denounce the undercover officers’ actions.”

May have acted as provocateurs:
Police admit to infiltrating Occupy Austin

Attorney Greg Gladden of the National Lawyers Guild has accused the police of entrapment and possible misconduct.

According to the Austin American-Statesman, court documents and interviews show that the infiltrators “camped with other participants in the movement, marched in rallies and attended strategy meetings.”

They may also have gone further, acting as provocateurs to encourage the use of lockboxes or “sleeping dragons” — lengths of PVC pipe into which protestors insert their arms to make it harder for police to remove them during a demonstration.

Seven protestors who used the devices while blocking a port entrance in Houston last December 12, have been charged with a felony and face jail terms of from two to 10 years under what the Statesman calls “an obscure statute that prohibits using a device that is manufactured or adapted for the purpose of participating in a crime.” 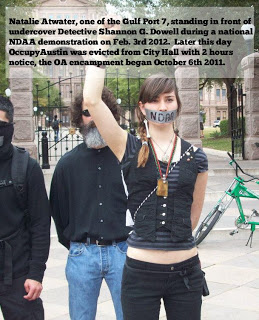 That’s “Butch” in the beard. Image from Occupy Austin / Facebook.
The question of the lockboxes came up during a district court hearing in Harris County last week at which one of those seven, Ronnie Garza, sought to have the charge against him dropped. It was disclosed at the hearing that Austin Police Detective Shannon Dowell — known to Occupiers as “Butch” — had purchased the necessary pipe and other materials using funds supplied by Occupy Austin, constructed the devices himself, and provided them to demonstrators.

According to Occupy Austin supporter Kit OConnell, the occupiers figured out “Butch’s” true identity after their encampment was evicted last winter. Affidavits from Occupy Austin members have pointed to Dowell as the person who pushed for the use of the lockboxes and allege that he would regularly pull participants aside “in order to express his frustration with debate and eagerness for more aggressive and provocative actions.”

Garza’s attorney, Greg Gladden of the National Lawyers Guild, has accused the police of entrapment and possible misconduct. Judge Joan Campbell, who had initially dismissed the case until prosecutors obtained indictments from a grand jury, says she will decide this week whether to allow the proceeding to go forward.

At the hearing, Dowell told the judge that he could not produce subpoenaed documents because emails he had sent about the operation from his work computer had been deleted and he had lost a thumb drive containing photos when it dropped out of his pocket and fell in the gutter. 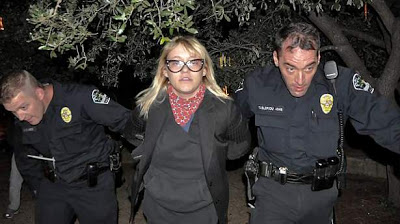 Arrest during Oct. 29-30, 2011, raid on Occupy Austin by Austin police. Photo by Ann Harkness / Flickr .
The Statesman reports that Judge Campbell expressed frustration with Dowell, while Garza’s attorney remarked, “I think he decided it was time the dog ate his homework.”

Judge Campbell has threatened to dismiss the case unless the required documents and the real names of the two other undercover officers, “Dirk” and “Rick,” are presented at the next hearing on September 5.

Police officials declined to comment on the question of if it was Dowell who first proposed using the lockboxes, but they did confirm that their department had ordered the infiltration.

Austin Assistant Police Chief Sean Mannix said that his department had begun receiving reports from confidential informants that the occupiers might be planning illegal protests. “We obviously had an interest in ensuring people didn’t step it up to criminal activity,” he said. “There is obviously a vested public interest to make sure that we didn’t allow civil unrest, violent actions to occur.”

Mannix does not believe any laws or departmental policies were violated, but he confirmed that the infiltration effort is the subject of a high-level internal review which is “absolutely looking into all aspects of what their undercover work was.”

[Muriel Kane is an editor at The Raw Story, where this article was originally published.]

Read the full transcript of the August 27, 2012, pretrial hearing in the 248th Harris County Judicial Court.