New York SDS : Agit-Prop Against the Business of Torture 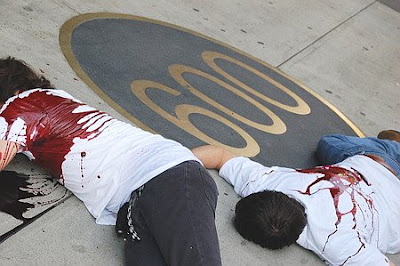 NEW YORK — “Is that real blood?” a woman passing the SDS die-in at L3 Corporation said. “Where’s the ambulance?” another stunned onlooker asked Mike Morice of Movement for a Democratic Society.

A dozen members of SDS New York staged a graphic die-in at L3 Communications Corporation this Friday – as part of the national observance of the Iraq Moratorium. Covered in corn syrup died blood red, 3 protesters lay still on the sidewalk outside L3. Leaflets distributed by the protesters claimed that L3 Communications “specialize and have actively participated in torture” in places like Abu Ghraib.

L3 janitorial staff who double as security looked on as people passing by walked around the prone protesters. Standing along Third Avenue protesters held a banner that said, “Iraq War = L3 Profit”.

Uniformed police and a man identifying himself as an auxiliary police officer arrived on the scene soon after the die-in began. The auxiliary officer, wearing an “American Trash” T-shirt and an upside down silver shield on a lanyard, ordered protesters to remove the stage blood or risk arrest for disorderly conduct. Protesters mopped up the mess and, still covered in stage blood, gave out leaflets.

One of the blood stained protesters, an SDSer named Derek, told NLN, “I think we definitely made our point.”

Source. / Next Left Notes / The Rag Blog
Photos, videos from the action.